Paratriathlete Manny Lobrigo gets even with his disability

“When I get out of the water, people are surprised to see that I’m an amputee, so I think it’s important to be able to change the perception people have about PWDs.”

It’s been more than a decade since Manny Lobrigo got into a motorcycle accident in which he lost his left leg. Needless to say life after that period was indescribably tough, especially for Lobrigo who values an active lifestyle.

We first met him early this year at one of our trips to Vermosa Sports Hub. He was doing laps early in the morning, flitting back and forth between the ends of the pool. We made our unsubtle entrance and struck up a conversation. Lobrigo was gracious—open in a way strangers understandably aren’t. He was articulate; his turns of phrase left an impression on me. We didn’t get the story we expected, or at least, Lobrigo didn’t tell the story the way we expected him to. We expected cinema but we got literature. 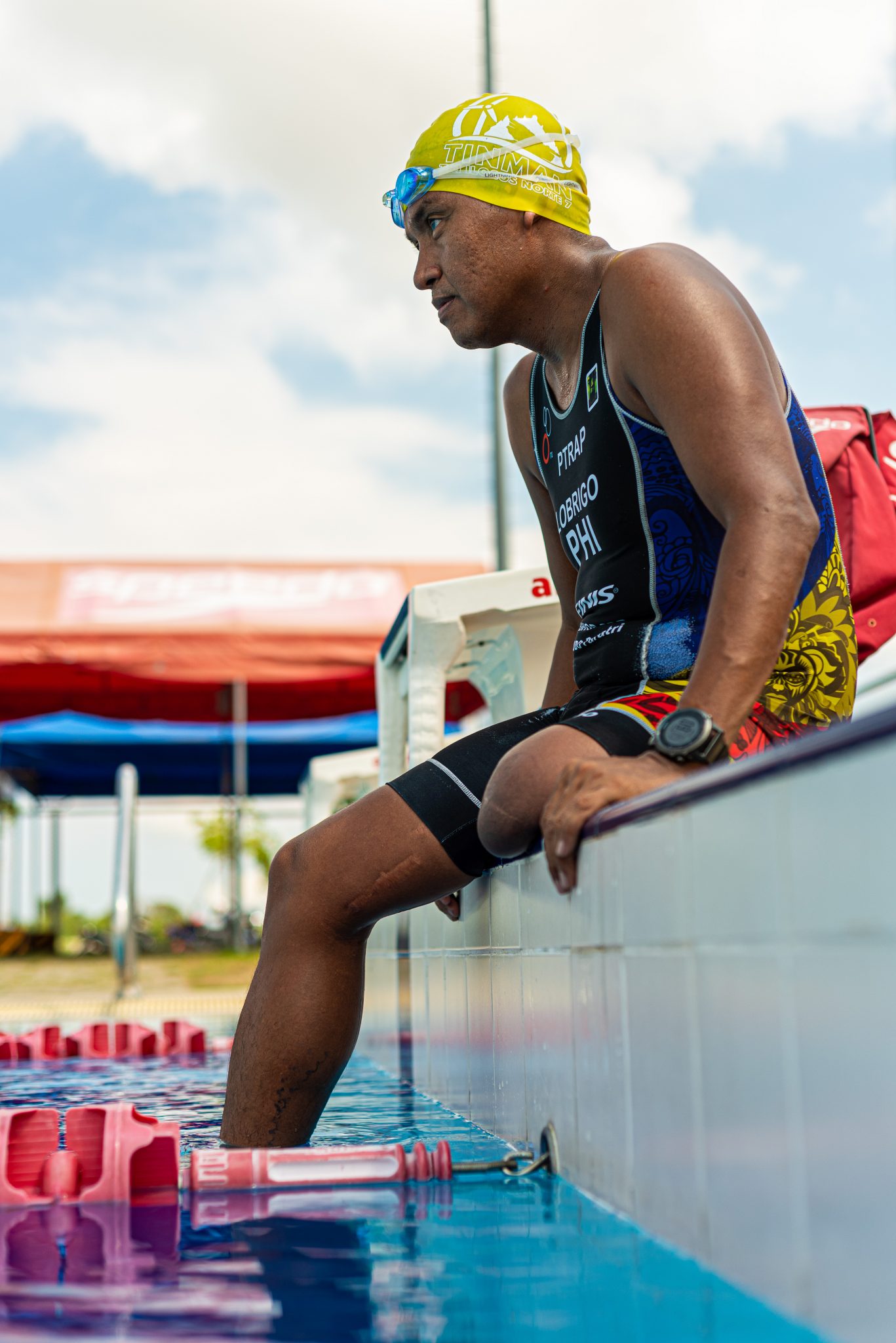 In retrospect, I think our naiveté was to blame: We relied on a fixed, one-dimensional narrative about tragedy, one in which the suffering overcame adversity in a grand, cinematic way. Instead the story Lobrigo was adamant about telling had less to do with the scale of the process and more about the process itself. It was a story about routine.

The 44-year-old Bicol native currently divides his time between working for a BPO company and competing in triathlons and paratriathlons. He trains in the morning and works from the afternoon until the evening. Lobrigo religiously follows this schedule, wasting no time as much as possible. Proof: The second time we meet him for our scheduled shoot, the guards at Vermosa tell us that he actually spent the night at the sports hub’s parking lot. “I try to cut the time I waste in traffic, so I sleep in my car and then train,” says Lobrigo. Here’s our conversation with the triathlete:

About three or four years ago my friends started joining triathlons, and I decided to join as well. My sport is actually swimming, and then I transitioned to triathlon. I did relays at first. Eventually I got a running blade (a prosthetic leg used by below-the-knee amputees), trained, and then joined individual triathlons. 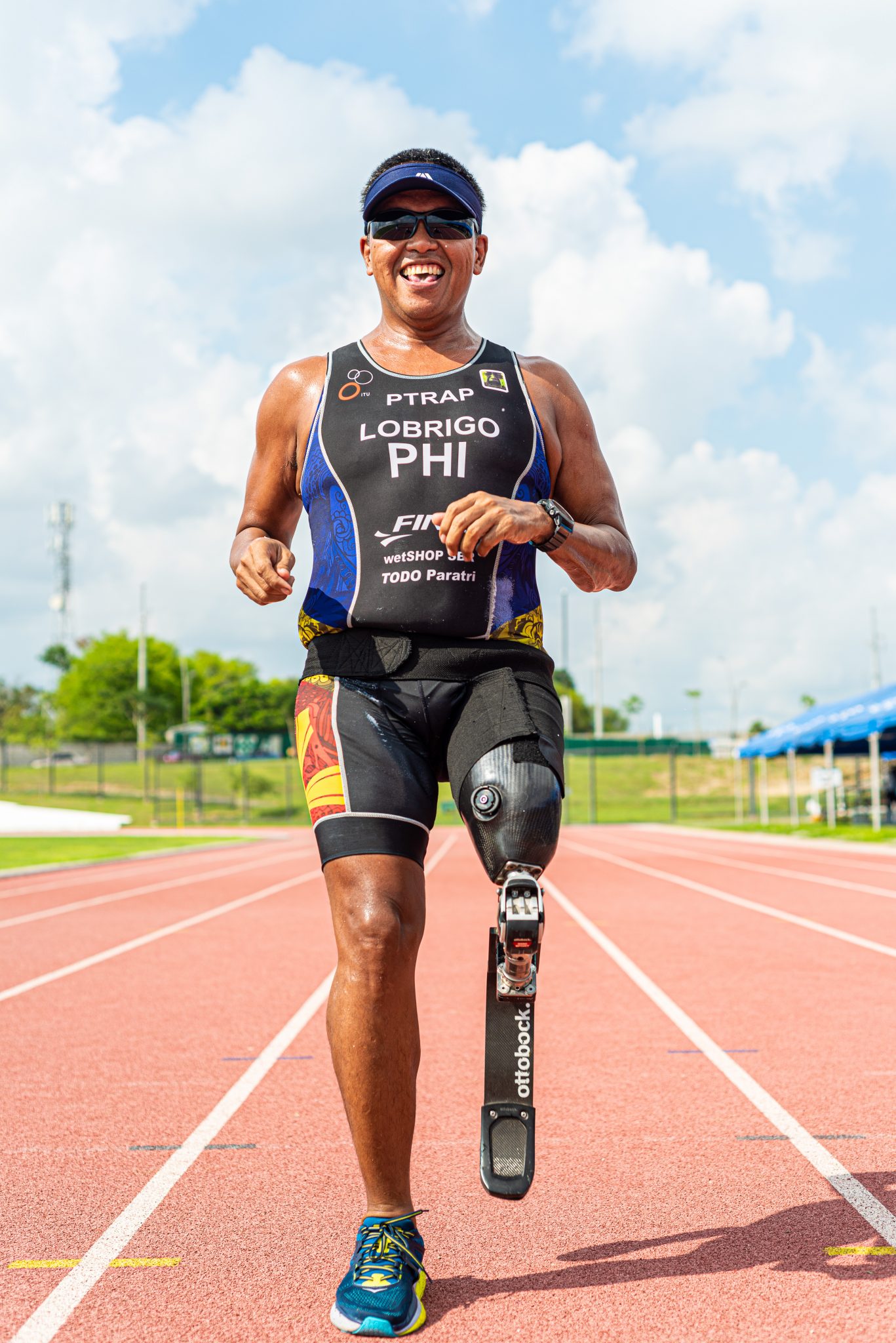 The 44-year-old triathlete is also affiliated with Tri Marikina

What was it like making that shift from just swimming to biking and running as well?

It was definitely a big change, but the real challenge was trying to run with a running blade. After the accident, what was left was just my stump so I lost a lot of power in my left leg. With biking also, there was the challenge of biking with just one leg and getting used to cycling with prosthetics on my left leg.

How has your progress been since you started?

It took me a lot of time to progress. Adapting to prosthetics took months—even years. Now, I’m happy that somehow my swim is relatively okay. My biking and running are stable right now. I’m taking the long shot of trying to qualify for the Olympics. I’m starting modestly and just really trying to keep improving myself. We’ll see how far I can go. 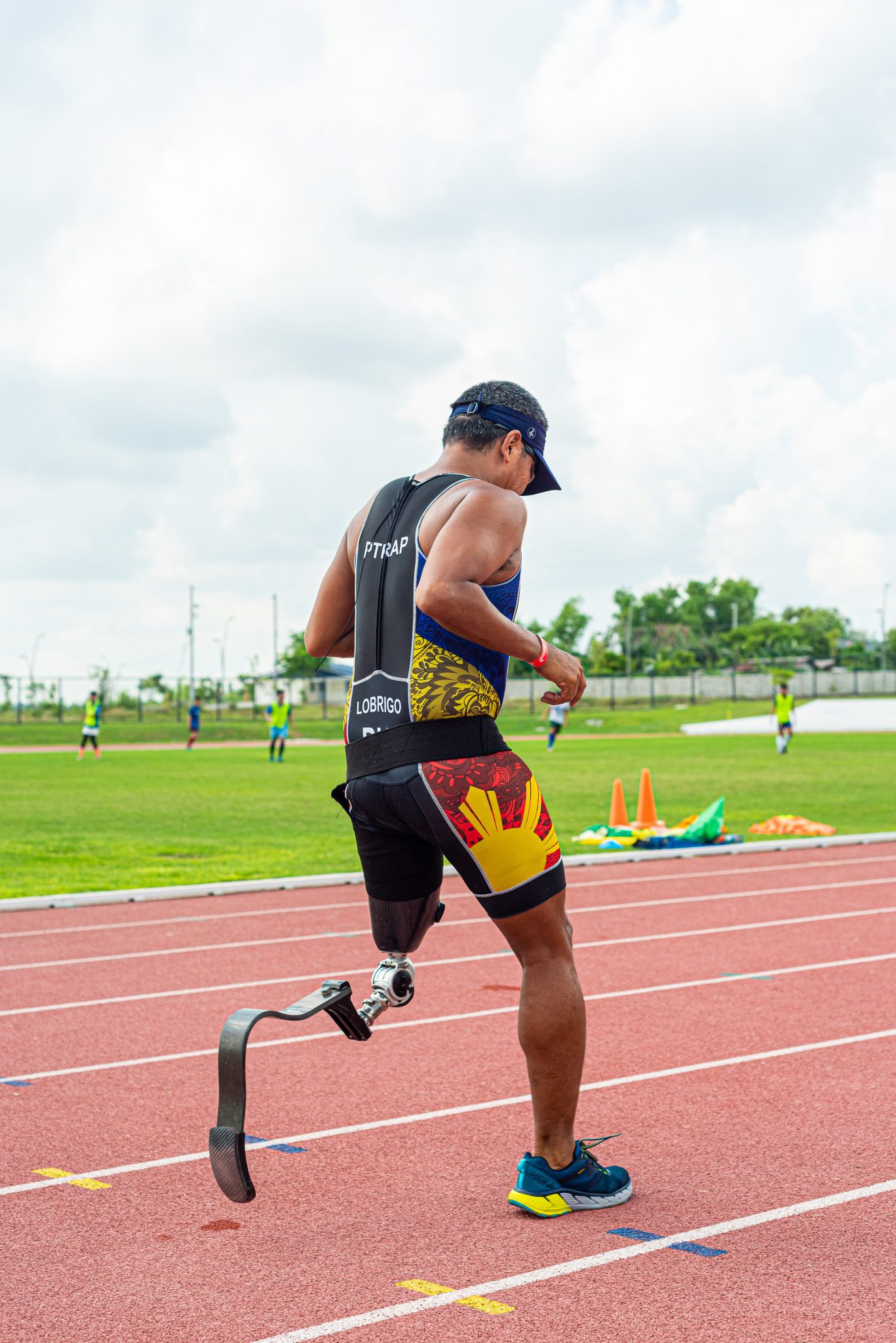 One of Lobrigo’s most recent races is the 2019 Alveo Ironman in Davao. His relay team was able to finish the course

Can you run us through your general training routine?

Right now I have to mix my work with training. As much as possible I try to optimize my time. Basically I do swim, bike, run. For running, I do indoors, I use a treadmill. And then for biking, stationary bike. And then I do power training as well. I try to focus on strengthening my stump because that’s always been my biggest challenge. On weekends, I try to ride. Sometimes in Subic or Tarlac.

What motivates you to train as consistently as you do?

My motivation is actually just thinking about myself. I want to get even with my disability. I’m always just thinking, ‘How far can I go?’ My motivation is wanting to conquer the barriers of being a disabled person. I have decided be in sports as long as I’m living. I can imagine myself at 70 or 80 years old and still doing sports. 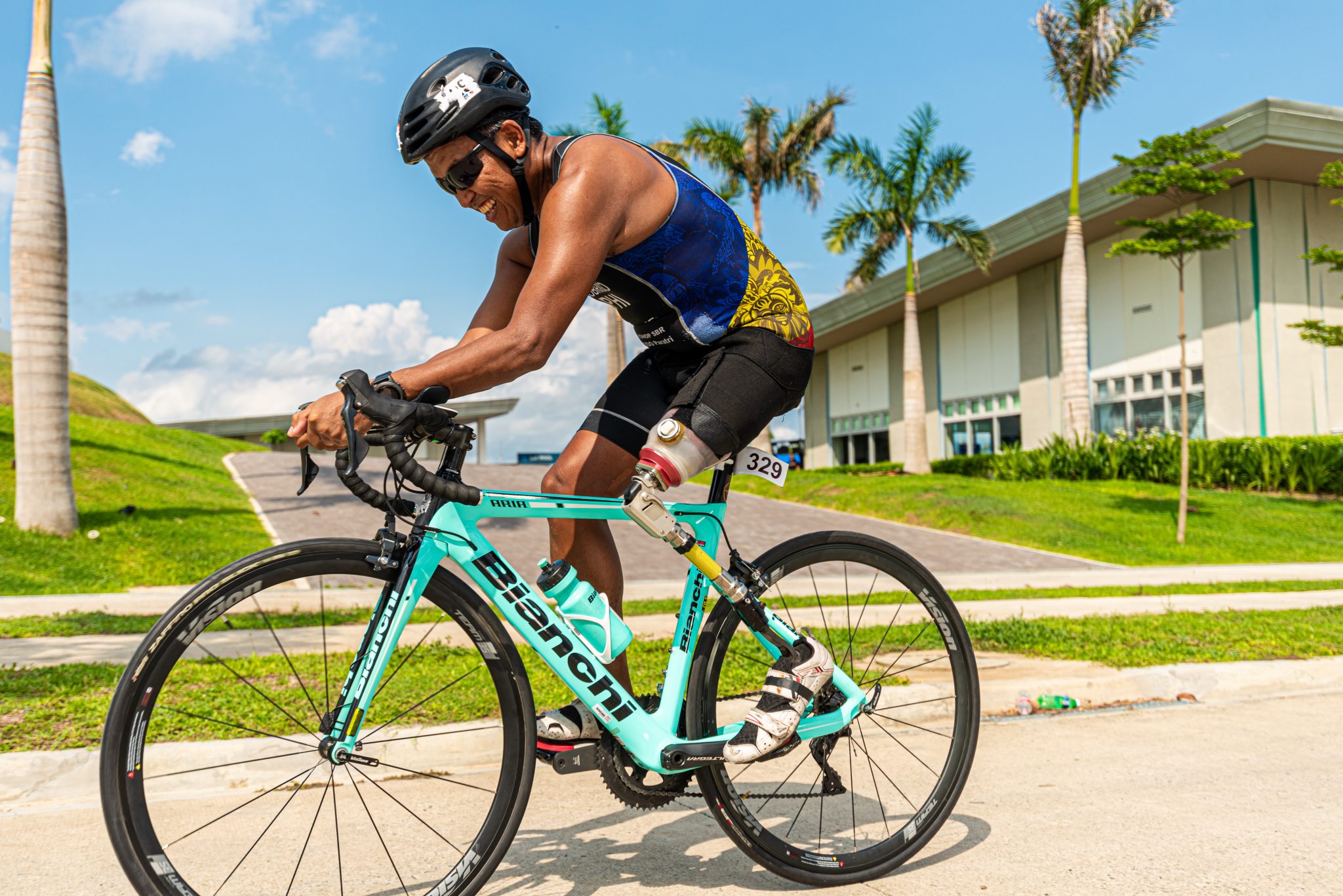 Lobrigo is a regular at Vermosa Sports Hub

Getting even with your disability—that’s an interesting phrase.

Yes, I mean, it’s obviously a struggle to do sports with only one leg. Running and biking, especially, are sports that need two strong legs. There’s a challenge there, but realizing that I could still run, I could still bike—that’s already something. I even look forward to working on areas I can still improve. But on the other side of that, there’s still a lot of responsibility where I have to do some kind of balancing act—emotionally and mentally. I could be having a really bad time, but that’s part of it. I still have to deal with pain, you know? I still struggle with phantom pain. I still have to do a lot of things to compensate for my disability. I always have to make my stump stronger, more powerful. But I try to just put things into balance and adopt a perspective that things will get better. It’s all a work in progress. 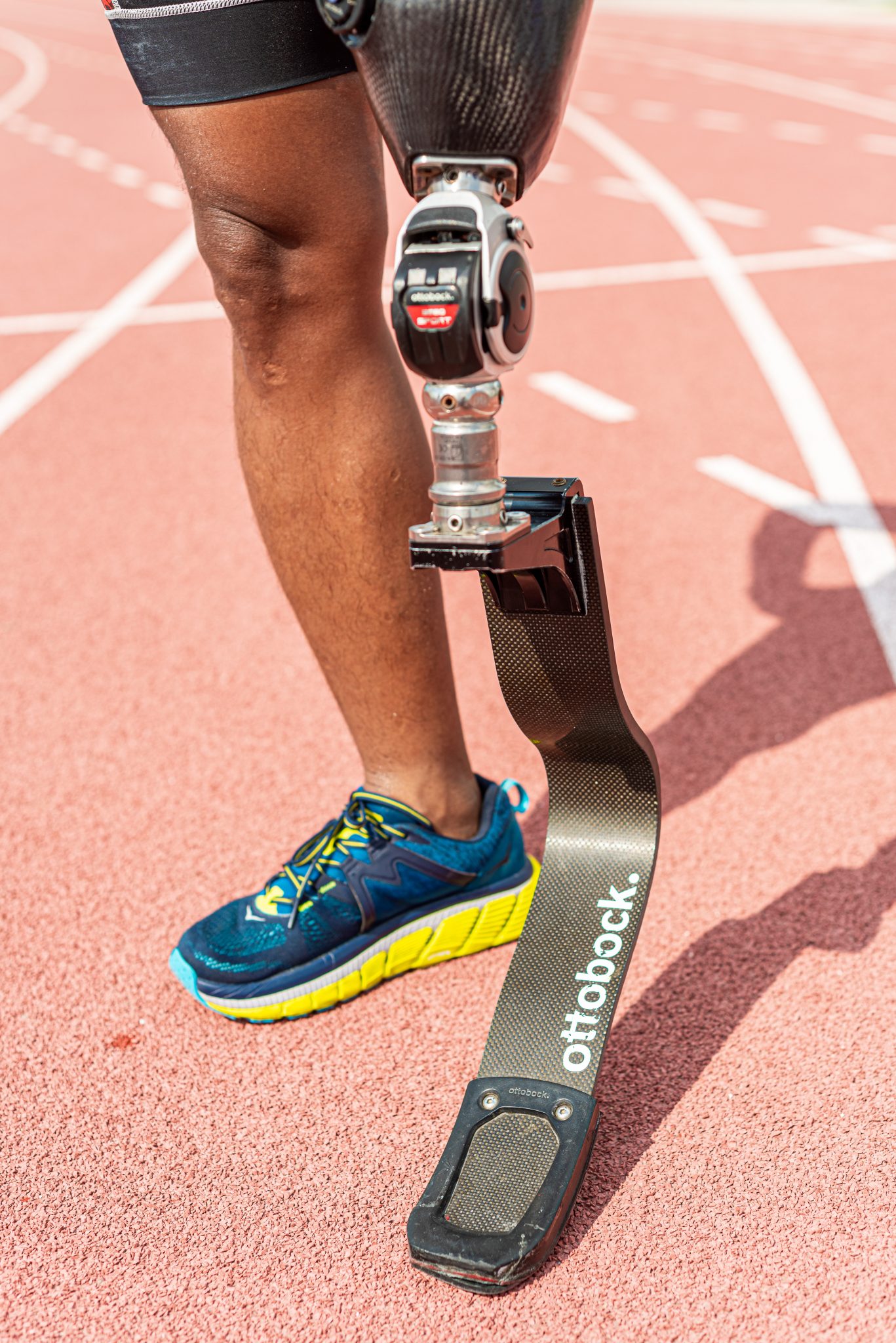 About responsibilities, do you think you have a responsibility in terms of representing persons with disability (PWD) in endurance sports?

Yeah, of course. When I get out of the water, people are surprised to see that I’m an amputee, so I think it’s important to be able to change the perception people have about PWDs.  I’m happy that people from the PWD community would somehow get something out of it [PWD representation in endurance sports] as an inspiration or get a different perspective, which is that you can get some kind of leverage from your disability. 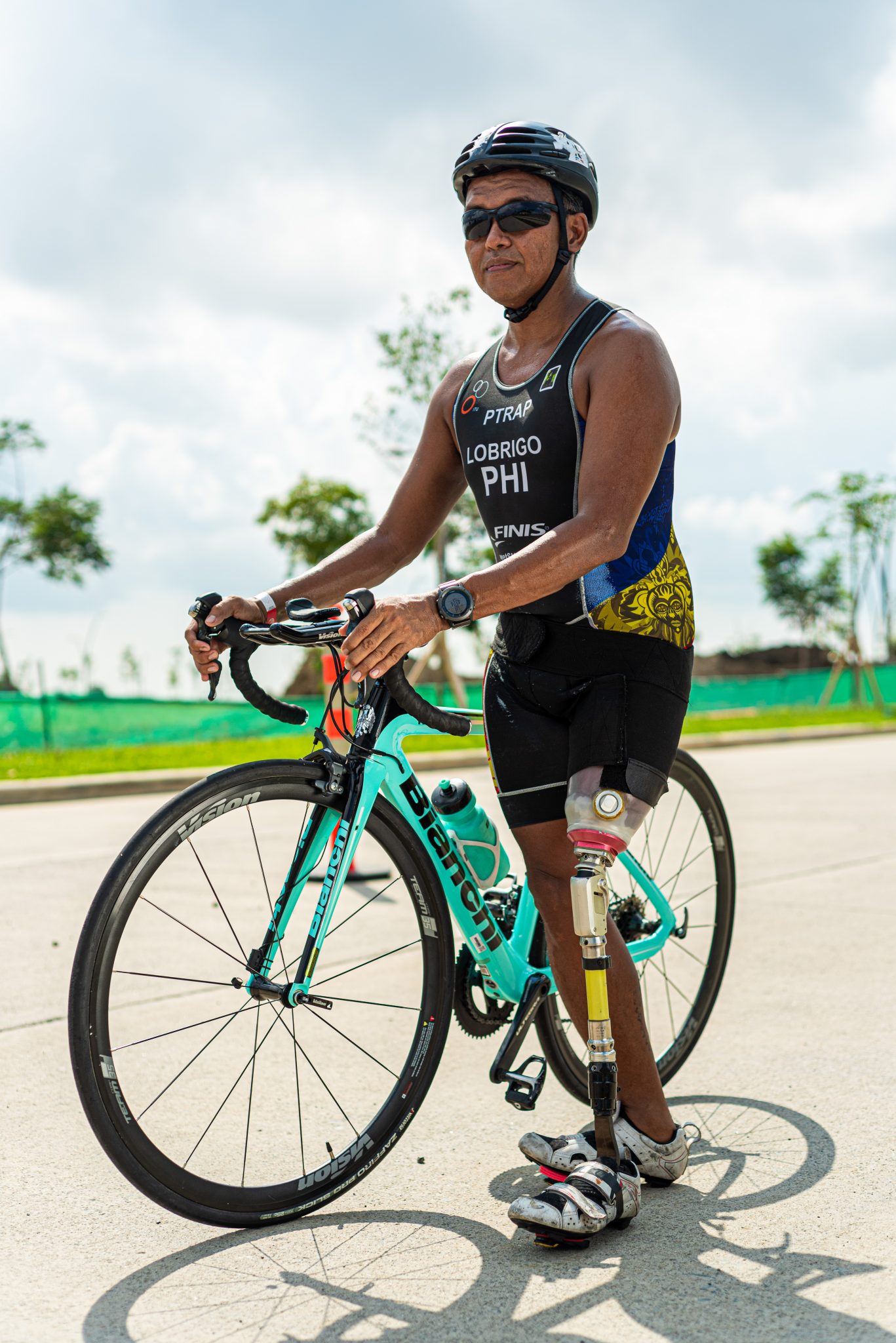 “My motivation is actually just thinking about myself. I want to get even with my disability. I’m always just thinking, ‘How far can I go?’ My motivation is wanting to conquer the barriers of being a disabled person. I have decided be in sports as long as I’m living. I can imagine myself at 70 or 80 years old and still doing sports.”

Does it help that triathlon is very much a community-centric sport? I can imagine that with the intensity of the sport, you develop really close bonds.

Yes, definitely. I have friends from different teams and we share the same passion for triathlon, and it’s life-changing. Not just for me but also for other people. And when I say life-changing, I mean it changes your perspective in life, you develop more respect for people and for the active lifestyle. That’s what I appreciate in triathlon.

We actually saw you with your relay team in Alveo Ironman in Davao. Can you tell us more about that race?

Yes, I had a cyclist and a runner, and I did the run leg. We were a PWD team. It was nice. You end up not thinking about your disability when you’re doing the sport. It was a very fulfilling race. 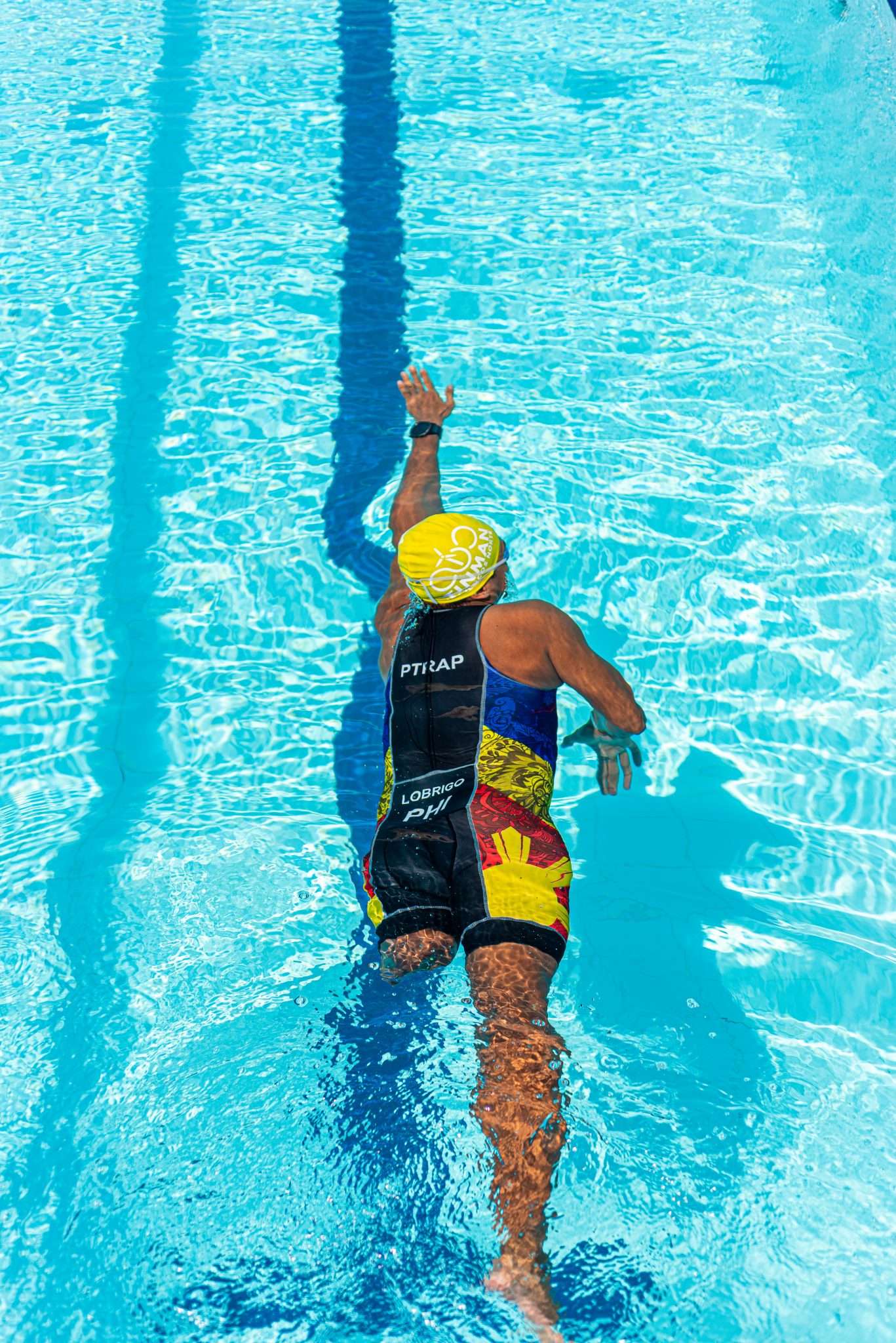 Did you finish the race?

Yeah, of course, we were even faster than most of the relay teams [laughs].

What’s next for you? What races are you currently training for?

Right now I just hope to be able to get an entry ticket to the Paratriathlon World Qualifying Series in South Korea and Canada. The South Korea series is for qualifying for the Paralympics happening this August 2020. So the more you participate, the more points you get, the better your ranking, and the more chances to qualify for the Paralympics. It’s a long shot, but you just have to try.

Video: This is how triathlon saved paratriathlete Manny Lobrigo