The Philippine Basketball Association (PBA) continues to show its full commitment in supporting the national team program as they lent the gutsy Meralco Bolts in representing the country at the 2018 FIBA Asia Champions Cup.

The Bolts, whose schedule at the PBA Governors’ Cup will be altered, is set to clash with some of Asia’s elite professional clubs, but Meralco forward Cliff Hodge believes his squad will make the best of their chance of representing the country in Bangkok, Thailand this Sept. 27 to Oct. 2.

“I would say our biggest advantage among the other teams would be our defense,” Hodge says. “When we are at our best, we are the best defensive team in the PBA.”

At the 2017 PBA Governors’ Cup, the Bolts averaged six steals and 3.6 blocks a game—a collective effort by some of the league’s resolute players like Hodge, rising star Chris Newsome, and two-time best import Allen Durham who garnered 19.3 rebounds per game, 13.2 of which were grabbed from the defensive end.

“I’m hoping we can bring that grittiness and hardworking defensive basketball that we are known for,” the 30-year-old forward added.

“I would say our biggest advantage among the other teams would be our defense. When we are at our best, we are the best defensive team in the PBA,” Hodge said

Last year, the Philippines settled for fifth in the Champions Cup in which Kiefer Ravena, Jeron Teng, Carl Bryan Cruz, and import Isaiah Austin brought the name “Chooks-to-Go Pilipinas.” This year, the Bolts will be fielding resident import Durham. The 6’6” center became one of the biggest factors in Meralco’s ascending reputation in the PBA as the power player out of Michigan helped the franchise set their foot in the PBA finals stage for the first time since 2016.

“Allen Durham is a beast [and he is] by far the best import I have gotten a chance to play with,” Hodge says. “He is the biggest reason for Meralco’s success the last few years. His success is from how hard he works and battles while he is on the court. 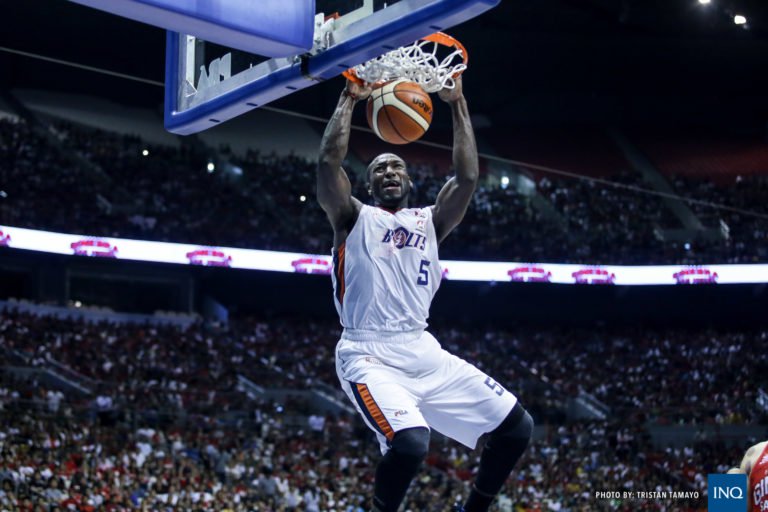 Allen Durham goes up for the two-handed slam dunk

Not only does the super import contribute huge numbers in the technical aspect of the game, Durham also steps up as the Bolts’ frontrunner in encouraging his teammates to go all out when they’re on the floor.

“He is definitely one of the leaders of our team and we try to mimic and follow his lead. I’m excited to see how he will be in an international tourney,” Hodge adds.

However, despite Durham’s staggering presence, the Bolts are still looking to add another reinforcement underneath, a much “taller and bigger” player who would further bolster the team’s defense in the paint and would serve as Durham’s tower partner.

“He is definitely one of the leaders of our team and we try to mimic and follow his lead. I’m excited to see how he will be in an international tourney,” Hodge adds

“This is going to be a lot of fun and will definitely be some exciting basketball to watch from a fan support. [I] hope everyone will be tuned in,” Hodge says.

The Meralco Bolts will go up against much stronger teams in Alvark Tokyo of Japan, Liaoning Leopards of China, the SK Knights of South Korea, Al Riyadi of Lebanon, Petrochimi of Iran, Pauian of Taipei, and the Mono Vampire of Thailand.

Now that Thirdy Ravena is headed to Japan, will he still qualify for the PBA draft?

PBA losing P30 million per month due to coronavirus pandemic

Terrence Romeo, Jeff Cariaso among sports personalities helping in the battle against COVID-19