The dark side of triathlon

The swim may be the shortest leg of the race, but it’s also the most dangerous

It was a bittersweet finish for this year’s Cobra Ironman 70.3 Philippines in Cebu when a triathlete competing in the men’s 45-49 category died of cardiac arrest during the swim leg of the race.

While tragic, the case of a triathlete dying during a race is not unheard of. A similar case happened in last year’s Ironman 70.3 Chattanooga where a triathlete suffered a heart attack and two more cases of cardiac arrest happened in 2011. All cases happened during the swim leg.

Among the 58 triathlon deaths that happened from 2008 to 2015 in the United States and Canada, 42 of these happened during the swim portion

Despite the amount of training people put into it, the swim leg continually proves to be the most dangerous. In a 2016 study, Science Daily showed that among the 58 triathlon deaths that happened from 2008 to 2015 in the United States and Canada, 42 of these happened during the swim portion. Most of these incidents seem to be caused by heart-related diseases.

There seems to be a disproportionately high rate of death in the swimming leg of triathlon and for years, people are trying to figure out why. Generally, people say it’s because of drastic water temperature, uncontrollable waves, and the amount of people participating in the race. Kevin Harris in his 2010 study said that adrenaline from the race, lack of swimming background, and inability to rest properly could also be factored in.

However, a study from the BMJ Open Sport & Exercise Medicine shows that it can be linked to what is called left ventricular hypertrophy (LVH), a condition where the heart’s left ventricle thickens. This usually happens to people with high blood pressure, but healthy endurance athletes can develop this too and can make a person predisposed to swimming-induced pulmonary edema (SIPE), the accumulation of fluids in the lungs. LVH can be caused by high blood pressure or pre-existing heart conditions that cause your left ventricle to work harder than the right.

When in cold water, your blood goes from your limbs to your core and raises your blood pressure so adding that with the exertion of swimming makes your left ventricle pump harder.

Eventually, this leads the vessels in your lungs to burst and fluids to leak into your air sacs. This is how SIPE is developed. When it happens, it causes difficulty in breathing, wheezing, confusion, and even death.

When in cold water, your blood goes from your limbs to your core and raises your blood pressure so adding that with the exertion of swimming makes your left ventricle pump harder

“Among the autopsy reports of the deceased triathletes, we found a much higher prevalence of LVH than the healthy athletes in Dr. Douglas’ study,” said Dr. Richard E. Moon, one of the researchers. “The degree of enlargement was also much greater in the triathletes who died.”

Under normal conditions, it’s not uncommon for a little fluid to leak out according to an Outside Online report, but it’s usually cleared out with enough ventilation. This makes it especially difficult for someone who is swimming because you breathe in intervals. SIPE can happen to even the healthiest swimmers and scuba divers. 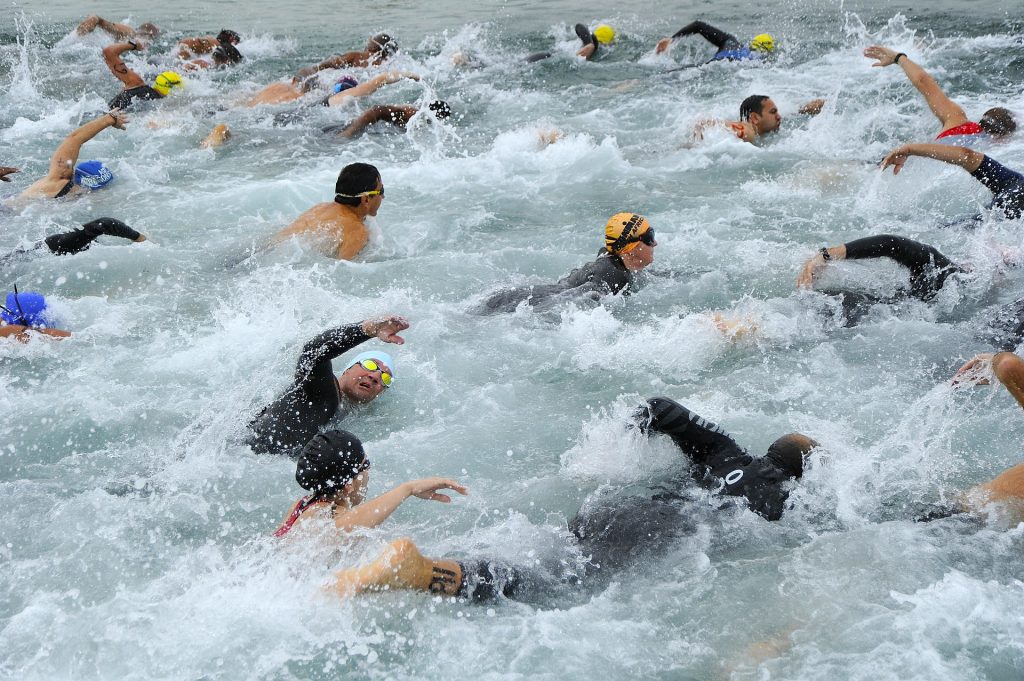 During the initial leg of the race, your heart rate is at its highest because of the effort you put into open-water swimming. The water’s cold temperature can cause an increase in your heart rate, even if your body appears to be normal. If you have a history of cardiovascular diseases, it’s advisable to undergo a full check-up and evaluation before a strenuous race.

And while it’s incredibly difficult to do anything about sudden attacks and cardiac arrests and whether pre-race testing would have made any difference, continued efforts to improve the safety protocols of triathlon events, which is the top priority of race organizers, should help make the sport more secure.

7 lessons we learned from 2 legendary triathletes

Let these female triathletes inspire you to form your own team