The young Mexican and Olympian outperformed everyone—including themselves

By Klyde Manansala and Catherine Orda | Photos by Javier Lobregat

After emerging as the top finishers in last March’s Ironman 70.3 in Davao, the young Mexican and Olympian dominated the Regent Aguila Ironman 70.3 Asia-Pacific Championship, standing out from arguably the best lineup of pros the country has seen.

The moment Mendez got a hold of the lead in the fourth lap at the 21K mark, the prodigy was very much aware when it was time to take it up a notch. Storming a late push onto the run course, Mendez lifted himself to clinch another title after coming off to an impressive finish at Alveo Ironman 70.3 Davao.

Mendez nailed a solid start as he got out of the water in 25:16 seconds, just four seconds behind Kevin Collington, who came first out of the water. Despite his slow start in the bike course, the 22-year-old kept his composure throughout the bike leg where favorites like Luke McKenzie, Braden Currie, Tim Reed, and Tyler Butterfield dominated throughout the longest course of the race.

This is arguably Mendez’ best performance (3:46), exceeding his most recent half Ironman win in Davao where he clocked in at 3:50. “I won the world championship at XTERRA, that’s really a big one for me as well. But yeah, this is definitely in my top results.”

“The best part of the race is that I won [laughs]. The most difficult one was that it was of course a real battle, I mean everyone raced strong and in some parts of the race, I didn’t know if I was going to be able to win,” Mendez said.

Although the Mexican failed to take the lead in the bike course, he still managed to keep himself within striking distance from the bike leaders as he settled for seventh, clocking in at 2:03:55 seconds—just 11 seconds behind bike leader Currie.

Come the run leg, Mendez pushed the button early to earn the third spot in the first three laps, before completely downsizing his nine-second gap from Butterfield who seemed to take control of the entire run course. As he approached the final few kilometers, Mendez hammered his way onto first place and finished 54 seconds ahead.

This is arguably Mendez’ best performance (3:46), exceeding his most recent half Ironman win in Davao where he clocked in at 3:50. This victory in Cebu joins “I won the world championship at XTERRA, that’s really a big one for me as well. But yeah, this is definitely in my top results.” 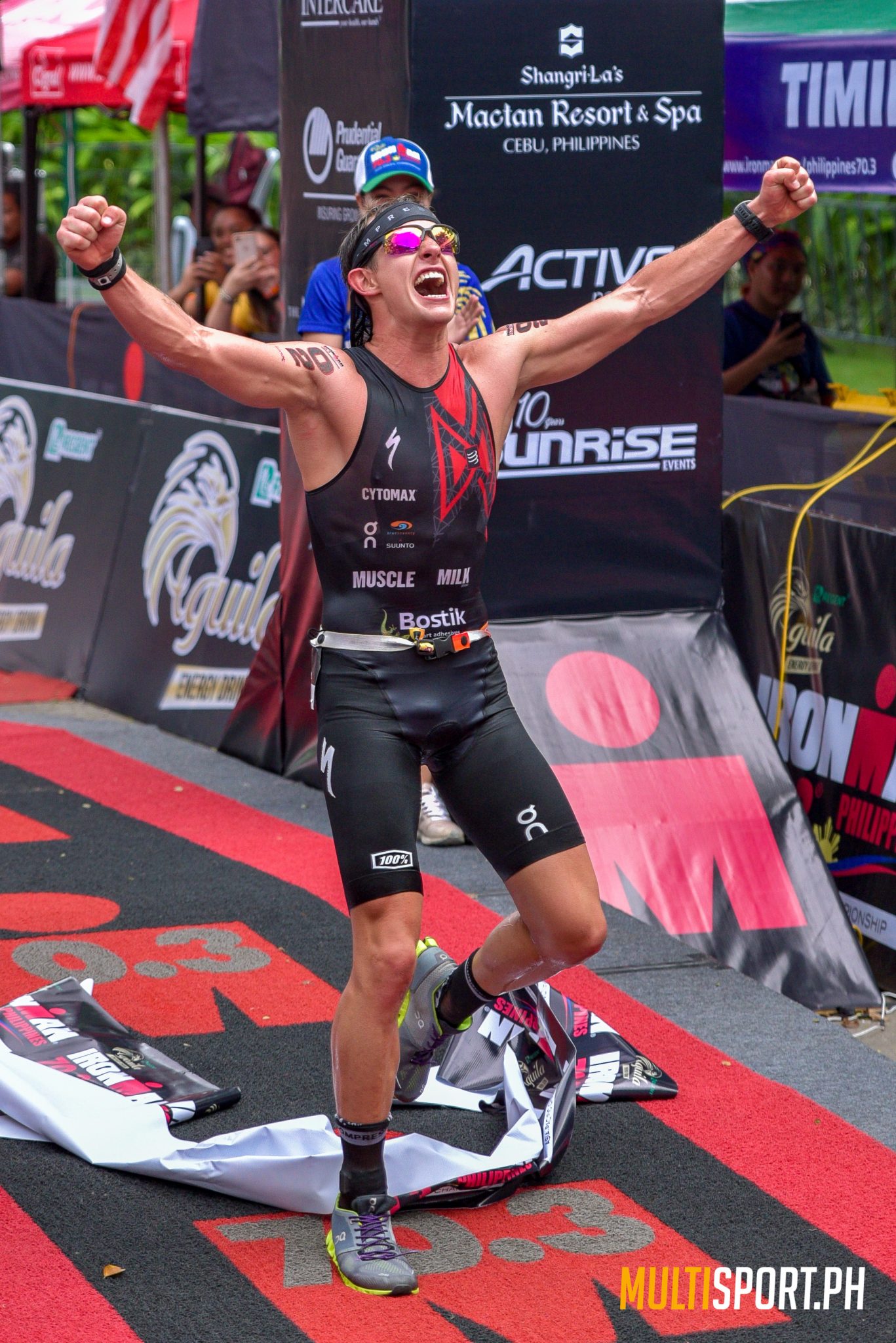 Asked about his plans after his win, Mendez isn’t keen on keeping off the circuit for awhile. “All my plans are to race in South Africa. I have also a big schedule for the next month. I think I have like five or more races maybe, so I really hope to keep the stakes high and keep winning if possible.” 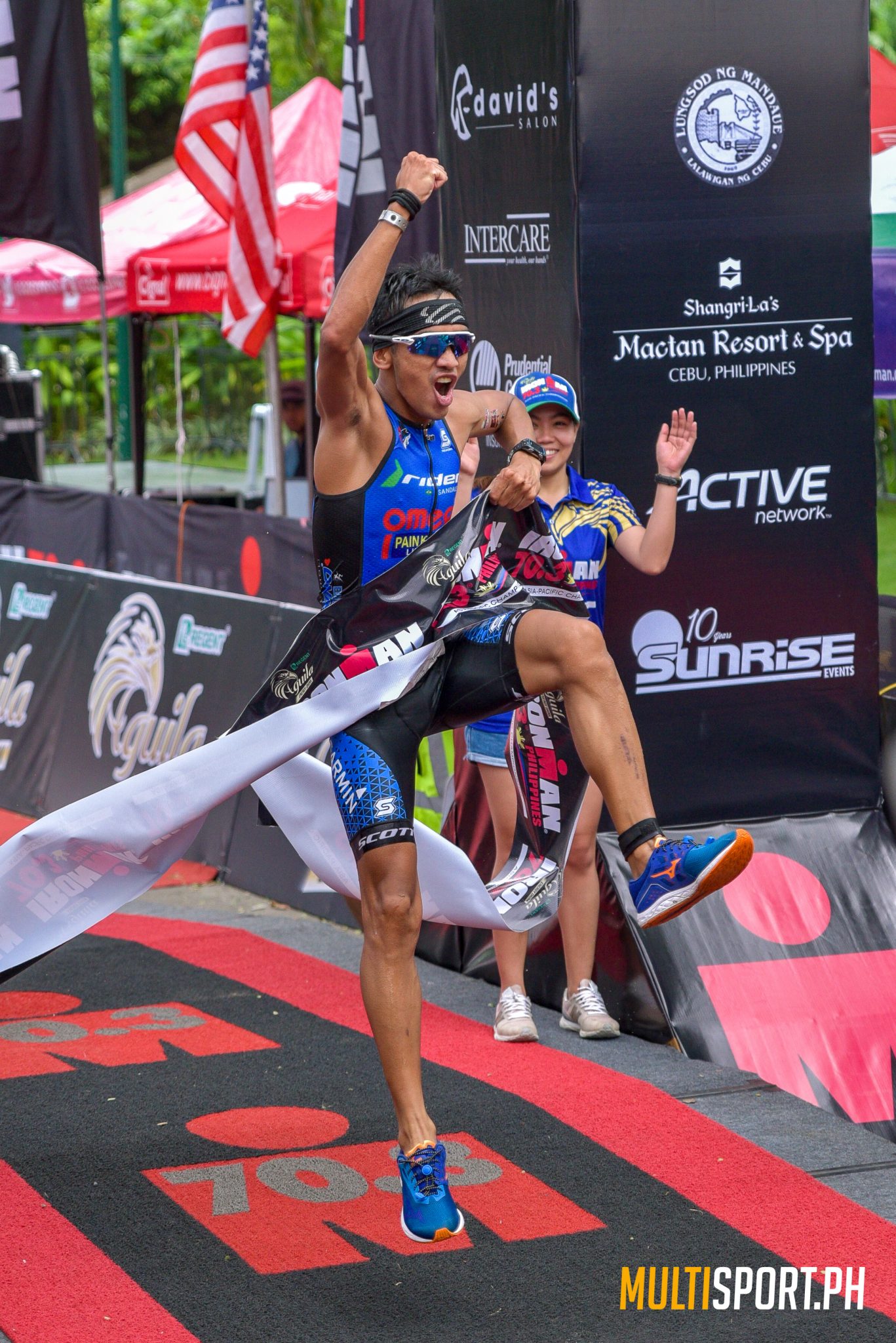 The female pro field was initially ruled by American Lauren Brandon, leading the charge out of the water with Manami Iijima a little over two minutes behind. Lauren Goss, Radka Kahlefeldt, and Caroline Steffen trailed very closely behind Iijima throughout the whole swim. Brandon, who is a former NCAA All-American swimmer, completed the swim in under 25 minutes and proceeded to sustain her lead up until the first transition and the bike leg.

Her advantage, however, gradually dwindled to about 30 seconds once she reached the 14K mark of the bike course, with Steffen and Kahlefeldt gaining enough speed to take the second and third spots, respectively. The fifth lap of the bike track then saw Kahlefeldt overtaking Steffen, with the former eventually securing a 38-second differential between herself and Brandon. 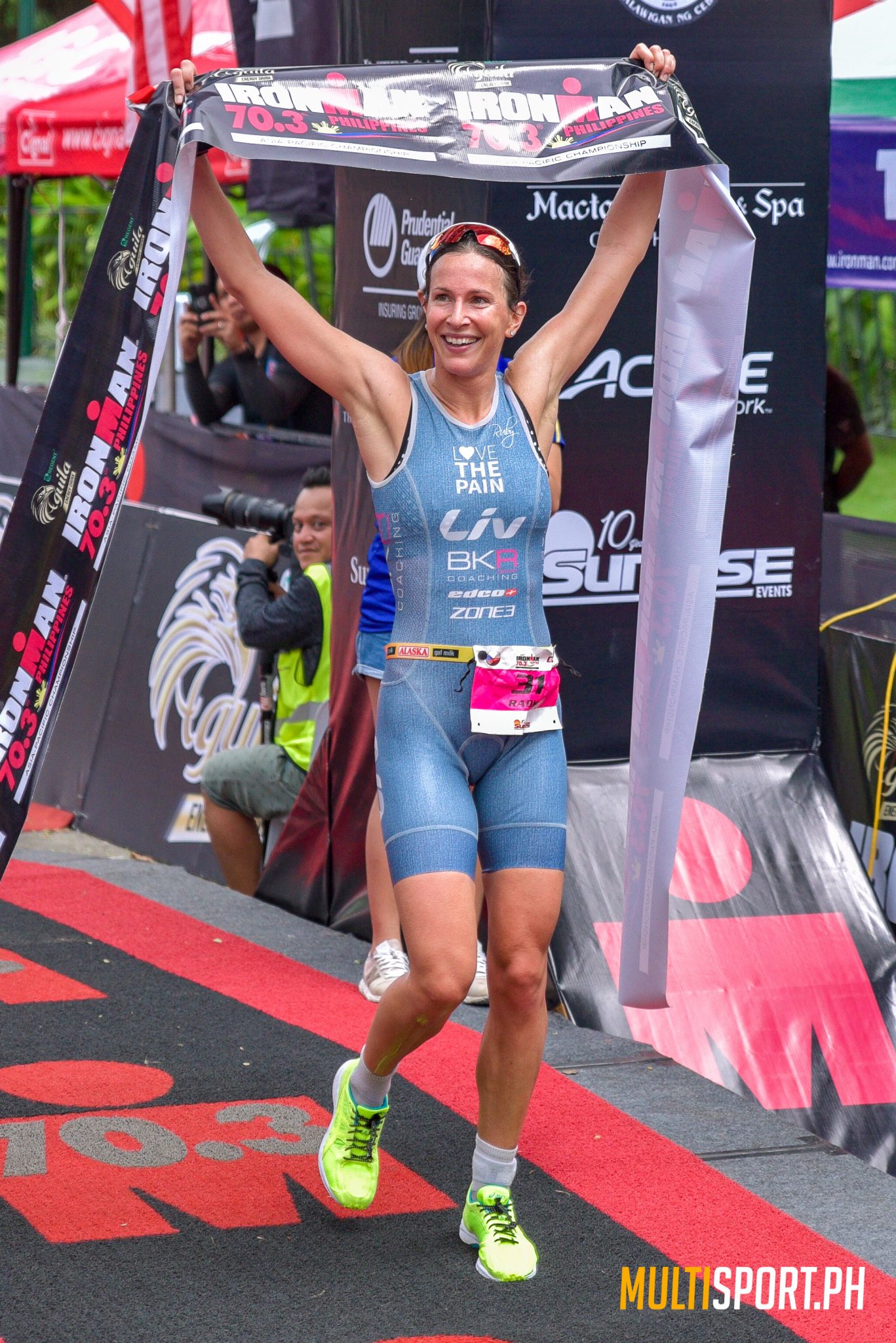 It was the subtle but critical shift of positions between Kahlefeldt and Brandon at the second transition that set the outcome of the remaining portions of the race: Kahlefeldt dismounted her bike in under two minutes—a small but solid advantage over Brandon’s two minutes and 15 seconds—finally gaining the lead that she would sustain up until the end of the race. Goss, Steffen, and Hauschildt lagged a few minutes behind.

It’s worth acknowledging Steffen’s placement at this point given that she suffered a flat tire and lost touch with the leading group towards the end of the bike leg.

“This is definitely my best race so far in my career. Especially since this is the Asia-Pacific Championship. And not only that, the field was amazing—Melissa Hauschildt, Caroline Steffen, Lauren Brandon. A few weeks before I traveled here, I told my husband ‘What a strong field,’ but he gave me confidence, he told me, ‘You’re strong, you can do it. This has been a great race. It gave me confidence that I’ll be going to the world championship,” said Kahlefeldt

Goss on the other hand suffered a much different kind of blow: After committing a blocking violation (for which she was apprehended by the bike marshal), she did not serve her 30-second penalty, giving the race officials reason to disqualify her. The official announcement wouldn’t come until hours after the end of the race, however, leaving Goss to enjoy her eventual podium finish of 4:20:12.

Meanwhile, Kahlefeldt’s initially humble lead increased to about five minutes at the 16.3K mark of the run, with the last few kilometers earning her a solid eight-minute advantage over the field. Four hours into the race and the crowd was sure of it—Kahlefeldt was going to be the first female pro to cross the finish line. 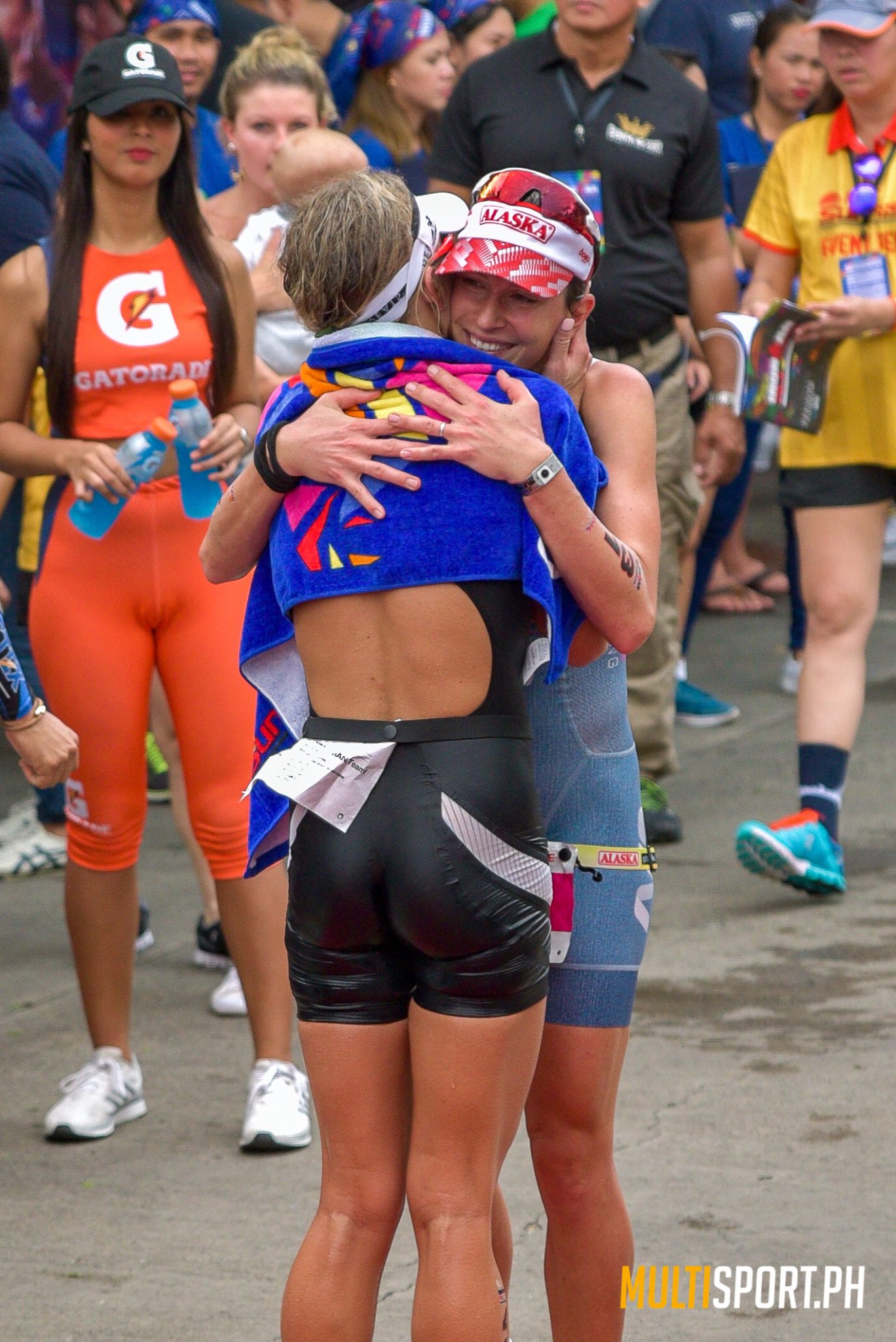 And she was. Clocking in at 4:12:13, the 33-year-old Olympian has indeed made a remarkable return to the Philippines, posting a performance that is easily up to par with her recent Ironman 70.3 Davao win. “This is definitely my best race so far in my career. Especially since this is the Asia-Pacific Championship. And not only that, the field was amazing—Melissa Hauschildt, Caroline Steffen, Lauren Brandon. A few weeks before I traveled here, I told my husband ‘What a strong field,’ but he gave me confidence, he told me, ‘You’re strong, you can do it. This has been a great race. It gave me confidence that I’ll be going to the world championship.”

Steffen (4:21:46) and Hauschildt (4:22:50) finished third and fourth, respectively, but were officially elevated to second and third place due to Goss’ eventual disqualification. 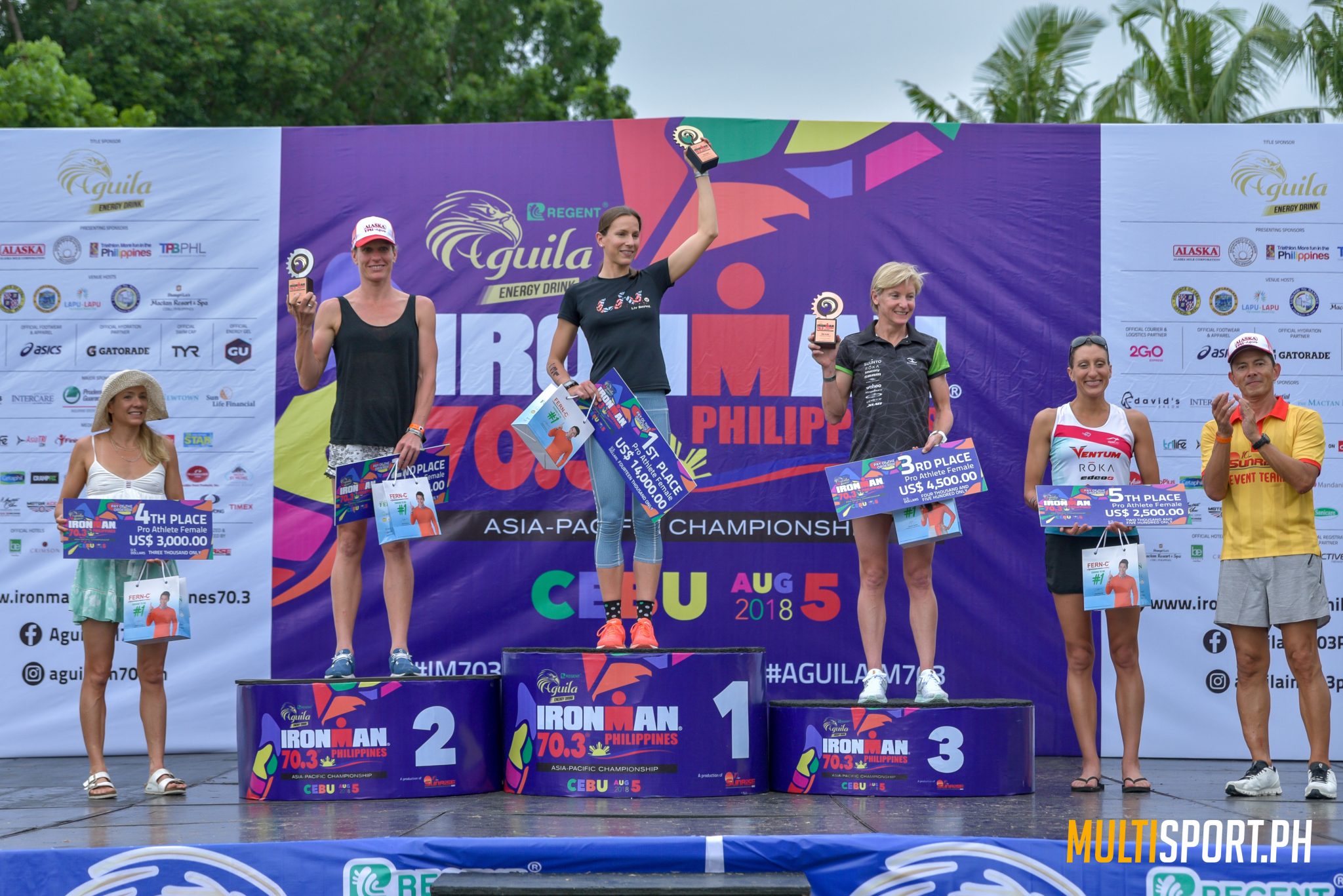 While we could credit much of the race’s success to the inspiring victories, there is one other occurrence that shouldn’t go unnoticed. During the first lap of the bike leg, Tim Van Berkel incurred two flat tires. In a move of remarkable sportsmanship, Bermuda’s Butterfield and Australia’s Currie—in spite of being in the middle of a close-fitting race—decided to lend some of their supplies to the downtrodden three-time Ironman distance champion.

“One thing special about triathlon is the community and the camaraderie, and of course with that comes sportsmanship. Today, during the race, Tim Van Berkel flatted, but we saw a couple of great acts of sportsmanship with Tyler (Butterfield) and Braden (Currie) both offering some support in a pit stop to help Van Berkel who could’ve ended up being down,” said Sunrise Events founder Fred Uytengsu.

The move harkens back to a similar instance a few years ago, where Caroline Steffen suffered a bike crash. Coming to her rescue was none other Cameron Brown—widely regarded in the triathlon community as not only one of the most talented athletes, but also one of the most upstanding ones. The move is a clear display of humbling generosity, and, as was witnessed today, it also became the inspiration behind Uytengsu’s latest idea:

“It [Currie and Butterfield helping Van Berkel] reminds me that it’s [triathlon] not all about winning, and I would like to acknowledge Cameron Brown because I’ve had the pleasure of knowing him for about 15 years…he is a champion in every sense of the word. And so today, I would like to introduce the Cameron Brown sportsmanship award.”

Official details about the award will soon follow, leaving both the pros and the crowd with questions. It’s perhaps the best way to cap off a race that never once skimped on the obvious—from its expertly-designed tracks to its pro field’s undeniable prowess.