Athletics struggles to be relevant despite Filipinos historically claiming two Olympic medals and numerous podium finishes in various Asian meets. This year, the narrative of national athletes is set to change with the completion of the only International Association of Athletics Federation (IAAF) certified track and field oval in the Philippines.

With this year’s Asian Games just over a month away and with the Philippines hosting next year’s Southeast Asian (SEA) Games, pressure is already mounting. The Philippine Athletics Track and Field Association (PATAFA) has produced marquee names such as two-time Filipino Olympian Isidro del Prado, Asia’s fastest woman in the ‘80s Lydia de Vega, and Long Jump Queen Elma Muros to name a few. Yet, under the radar of many Filipino sports fans, this generation’s national athletes have already beaten their predecessors’ records or at least have gotten close to beating them.

This is the beginning of a new order in the realm of Philippine athletics. Despite the long-running wave of adversity in the state of Philippine sports, there continues to be a beacon of hope for all Filipino athletes. As the PATAFA president puts it, “Every athlete must do what they can, wherever they are, whatever they have”

“Our athletes are used to working hard,” says Ayala Corporation managing director Philip Juico. And it’s about time to get the support and traction they’ve long deserved. Vermosa Sports Hub’s newly-built track and field oval offers new hope to these athletes. However, a Filipino athlete’s story is not without adversity. Here are three stories of hardship, perseverance, and strength from over 7,000 islands making up this diverse archipelago.

In a town deep in the forests of Negros Oriental, there grew up a young Marestella Sunang, a Filipina long jump Philippine record holder, an Olympian, and a consistent podium finisher. This skinny, long-legged, and dark-skinned girl gained the attention of an athletic coach in a physical education class. “Noong elementary ako, may isang araw na pinatakbo at pinatalon lang kami ng teacher namin. Mula noon, nag-offer siya na mag-training ako,” she says. 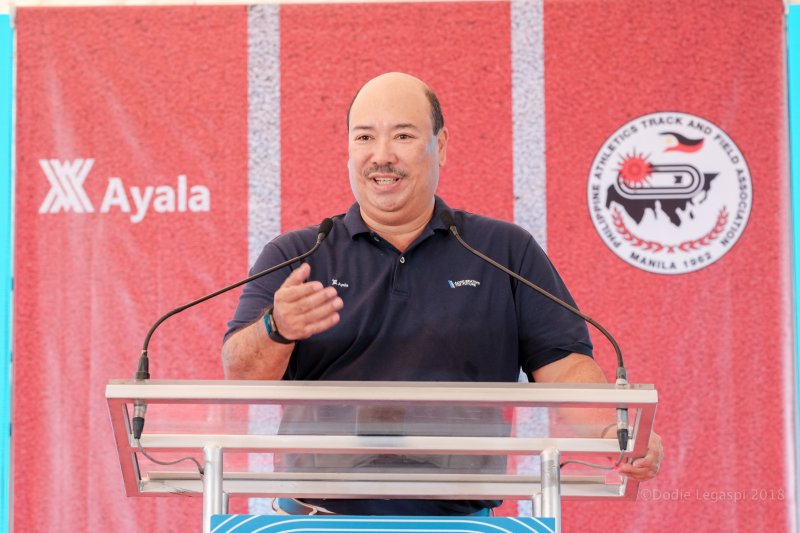 Sports brought her to places she’d never imagine going. With her dedication, she pursued this lifelong choice to become a Filipina athlete.

From Baller in the Province to National Decathlon Athlete

Aries Toledo is the typical Filipino who loves to play basketball in their town court during downtime. But fate has a different plan for him. Known as the kid who could run the fastest, many of his friends and teacher pushed him to give running a try. He played for a year or two but eventually stopped for almost three years.

He joined their school team and then won the provincial meet that same year. From there, he continued his athletic journey until he was discovered by one of PATAFA’s coaches in a competition held in Sta. Cruz, Laguna.

Since joining PATAFA in 2016, Toledo has been training for decathlon, one of the hardest (if not the hardest) athletic events. It is composed of 10 events: 100-meter dash, long jump, shot put, high jump, 400-meter dash, 110-meter hurdles, discus, pole vault, javelin, and 1,500-meter run. This entails a dynamic training program to match the very different disciplines embodied by each event.

With the inspiration and motivation coming from his family, he has continued to outdo himself and reap the rewards of his hard work. The first time he competed as a decathlon athlete, he won gold. This year, he competed at the Thailand Open and won silver, breaking the bronze medal record from the 2017 SEA Games.

Following your parents’ footsteps is never an easy task. But it is the path Michael Carlo del Prado is willing to take.

“I want to make my own legacy,” says del Prado. His father Isidro del Prado still holds the 400-meter record in athletics. And now, he is the current coach of Brunei’s national athletics team. 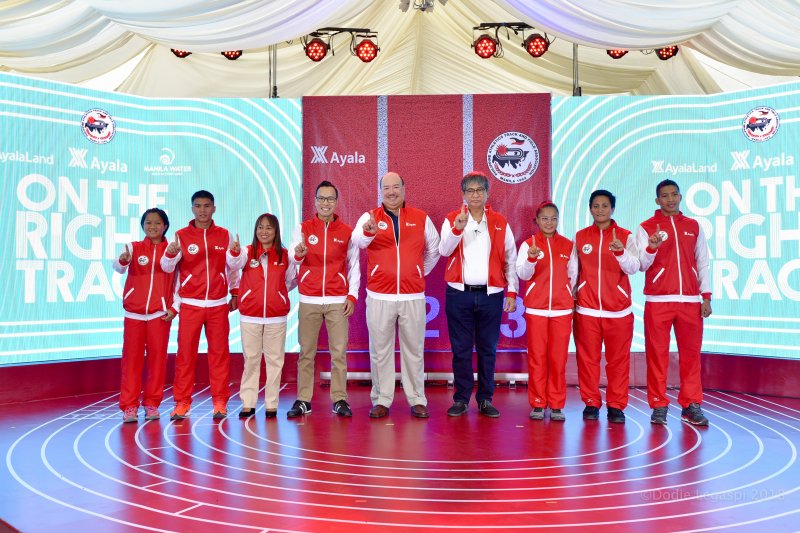 The PATAFA athletes with executives from Ayala Corporation

As a lanky boy growing up, he got into track and field quite late. His introduction was during his first year in De La Salle University but he struggled to balance studies and a track career. “It’s hard to prioritize what you want kasi kailangan mo rin naman ‘yung education and kailangan mo rin ‘yung sports,” del Prado says. But he’s determined to pursue it for the long haul and strive to maintain good grades to be eligible to play.

He finished his bachelor’s degree earlier this year and obtained his break when he placed second at the National Open held in Ilagan last year. When faced with the opportunity to play for the national team, and eventually the SEA Games, he knew he couldn’t let it pass.

Being used to training in an eight-lane track, moving to PATAFA’s new home in Vermosa is a great advantage for him and his fellow athletes. “Siyempre ‘di na kami maninibago when we go out of the country… if you train every day, you will get the exact feeling of how near or far every lane is from each other.”

This is the beginning of a new order in the realm of Philippine athletics. Despite the long-running wave of adversity in the state of Philippine sports, there continues to be a beacon of hope for all Filipino athletes. As the PATAFA president puts it, “Every athlete must do what they can, wherever they are, whatever they have.”

Football rebuilds the future of marginalized youth, brings nations together