Although Brooks Sports Inc. was founded in 1914, the company remains tireless in its pursuit to add new technology into its shoes. This Berkshire Hathaway subsidiary (owned by Warren Buffet, the third richest man in the world) began its focus on running shoes in 1972. As the years flew by, Brooks packed its shoes with all sorts of proprietary technology, mostly in the midsoles—HydroFlow, MoGo, and Substance 257 to name a few.

With this same emphasis on midsole technology and a cushy upper that keeps feet snug and in place, the Ghost 12 provides neutral runners with a smooth, calf-comforting ride from upper to outsole.

Slipping into the Ghost 12 for the first time is like pulling on a pair of funky socks. You would immediately notice the duvet-like fit of the shoe. Rather than just clinging onto the foot for dear life, the 3D Fit Print upper wraps the foot snuggly and does so with soft, breathable padding toward the top portion of the foot; this is aided by a tongue that is more heavily padded than most.

Granted the shoe positions itself more for longer runs, it’s only apt that it’s built to keep the feet in it for the long slog. The laces are on the soft side, which begs the question of how long these might last. Nonetheless, even with tougher, more rugged replacement laces, the pillows of tongues protecting the feet from the  grip of laces more than adeptly keeps them free of lace burn. 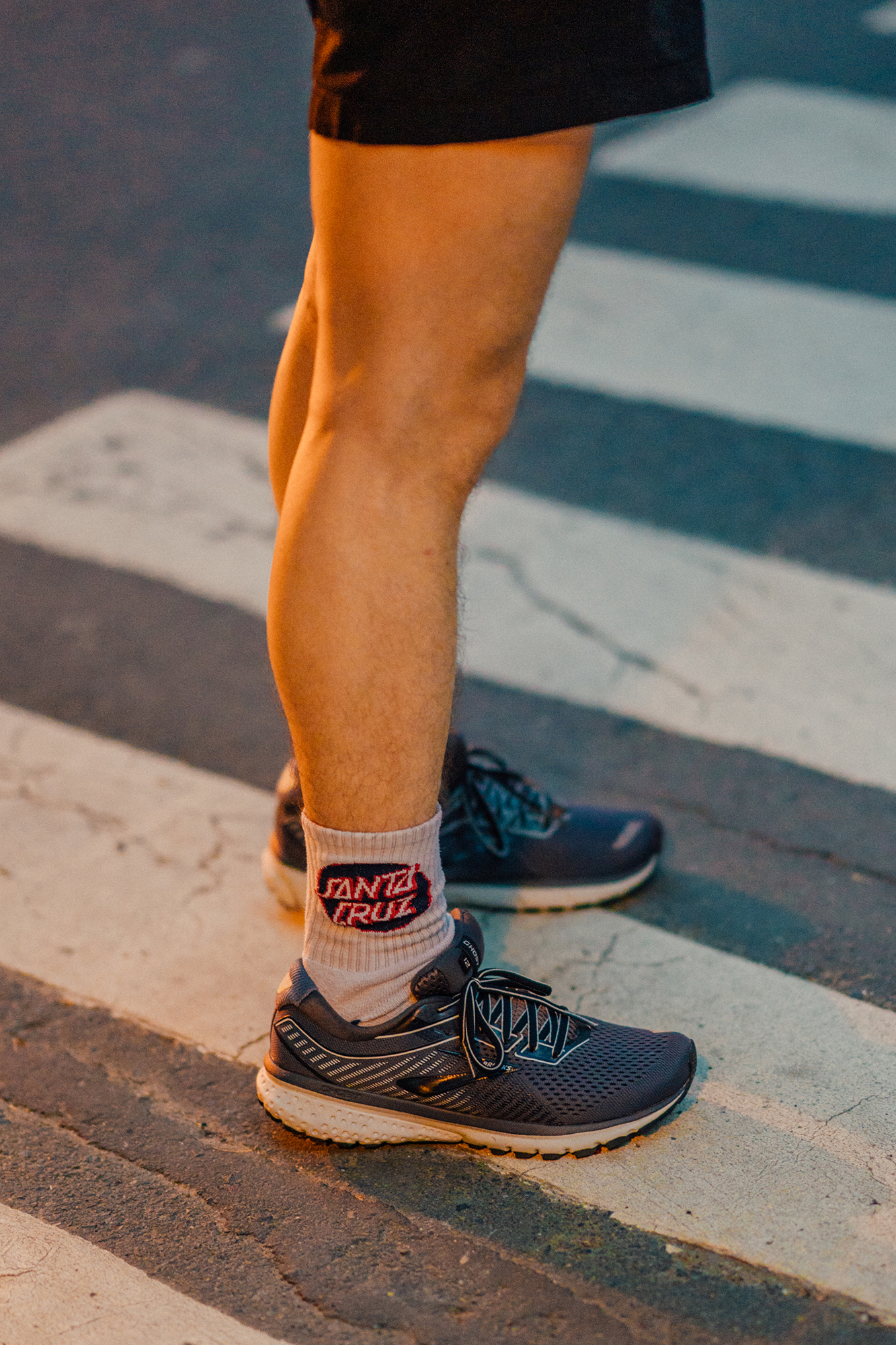 The stable 3D Fit Print feels as though it is impermeable to water and rides right below a highly breathable material, giving it good aeration and allowing a little expansion for longer runs in which feet tend to swell a bit. For runners keen on running through puddles and splashing boisterously as they do so, the Gore-Tex version of the shoe offers a waterproof membrane to keep feet completely dry.

Between Earth and Sky: Heel Counter, Last, and Toe Box

The heel counter is the toughened back of the shoe sitting against your heel, which when constructed too low increases the chances of a burn. The Ghost 12 however has an adequately high heel counter, rising to mid-ankle height. More intriguingly though—and enjoyably at that—the heel counter hosts an abundance of cushioning mostly around the top. The softness of the material keeps friction on Achilles tendons at bay while holding the foot down against the cushiony midsole. This ensures that your feet won’t slip around the shoes, protecting your toes and soles, and eventually your full leg.

More intriguingly though—and enjoyably at that—the heel counter hosts an abundance of cushioning mostly around the top. The softness of the material keeps friction on Achilles tendons at bay while holding the foot down against the cushiony midsole

Holding the shoe up and peering at the bottom, you can see a semi-curved shape. This is in contrast to a straight or curved shape, the former most suitable for overpronators (flat-footed friends like me!) and the latter for supinators (the good folks with high arches). The semi-curved shape of the Ghost 12 is a hybrid of the two, which offers support around the arch without adding the weight that straight-shaped shoes tend to have. This shape, in addition to what appears to be a Strobel lasting, a thin sheet of material glued to the midsole with the upper stitched to it, provides you with support and stability while remaining pliable—but not as bendy as something like a Nike Free Run. This indicates that the shoe is adequately geared to keeping feet safe for mid to long distances. 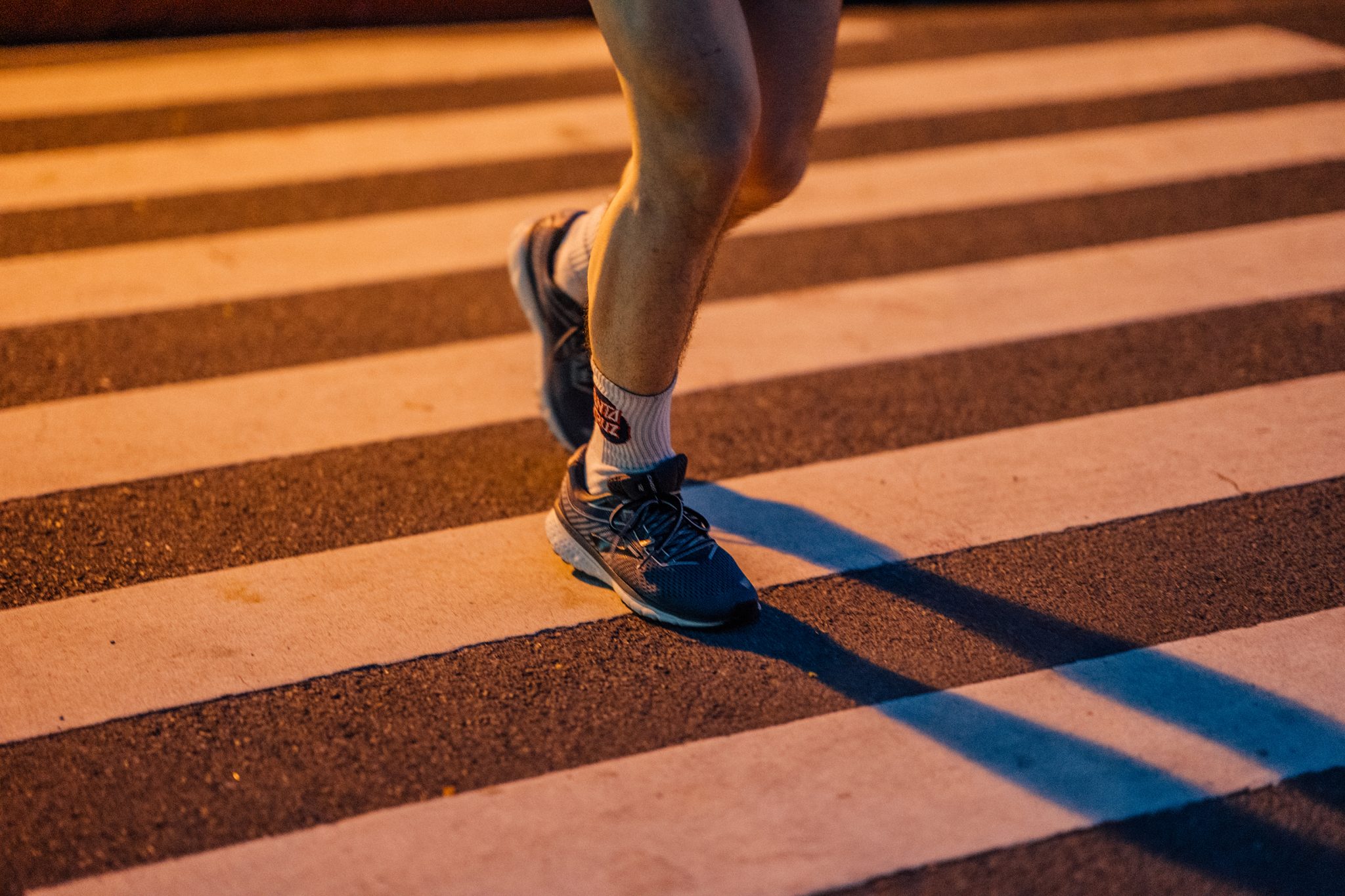 The toe box meanwhile has ample wriggle room. You also notice that the shoe curves upward fairly steeply. This seems to be the direction running shoes are taking these days. In doing so, you can notice an easy heel-to-toe roll, which propels you forward with a bit more momentum, taking pressure off the calves.

The Midsole and Outsole: Packed with Technology but Light Nonetheless

With a midsole drop of 12mm, the shoe is on the chunkier side. Not quite like a pair of Hoka One One’s but chunky nonetheless. It goes without saying then that you can expect a softer ride. The midsole is thick around the back of the shoe but the weight feels evenly distributed. That said, the shoe provides heel-strikers with a good amount of roll while giving mid-foot runners a good amount of boost, too.

The toe box meanwhile has ample wriggle room. You also notice that the shoe curves upward fairly steeply. This seems to be the direction running shoes are taking these days. In doing so, you can notice an easy heel-to-toe roll, which propels you forward with a bit more momentum, taking pressure off the calves

Regardless of how you choose to land, the segmented crash pad, an integrated system of shock absorbers, distributes the blow of the pavement. Be it the thickness of the midsole or this system doing its job, I barely noticed the change of terrain that comes as I turned from Ayala Triangle to run down Gil Puyat Avenue.

More than the shock absorption system, Brooks has installed a bunch of technology in the shoes to impress runners. DNA Loft Foam, which first appeared in Glycerin 16 in 2018, is the softest midsole the company has created. Rather than whacking a slab of EVA (ethylene-vinyl acetate or the closed-cell foam they make pool noodles and Crocs out of) on the bottom of the shoes, Brooks blends EVA with rubber and air to offer softness and protection while remaining light. 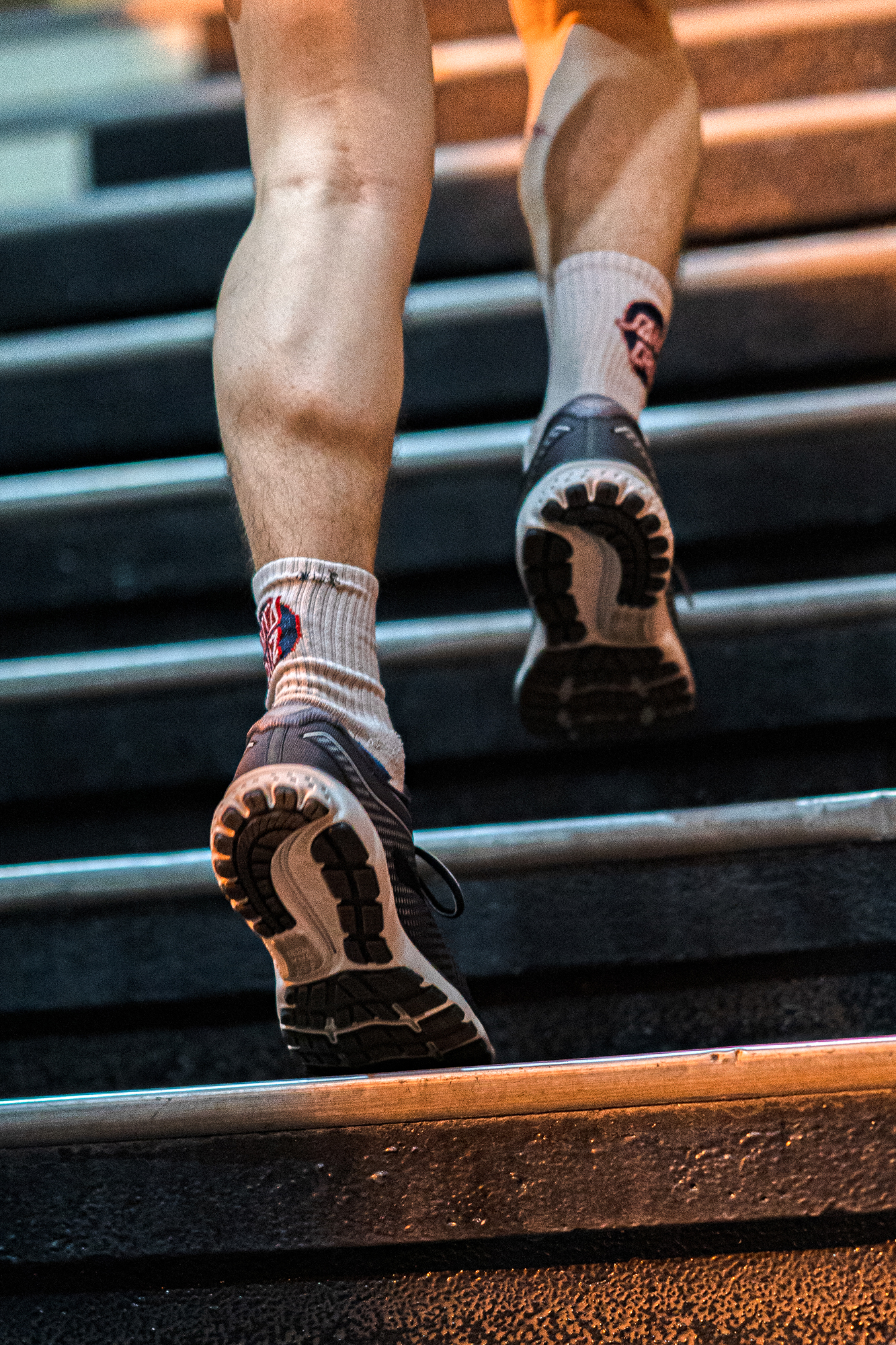 The Ghost 12 also incorporates the BioMoGo DNA cushioning at the front of the midsole to give runners a comfortable step transition from heel to toe. BioMoGo is the world’s first fully biodegradable midsole cushioning material, breaking down 50 times faster than EVA when it hits “an active, enclosed landfill.”

The outsole however of the Ghost 12 is bolstered by a layer of denser, harder blown rubber that protects the fluffy (at least comparatively) midsole from excessive wear and tear. This protective portion of the shoe provides enough grip for outdoor and indoor runs while keeping the shoe flexible; with flex grooves lining the forefoot section of the shoe. Three deep trenches allowing the shoe to bend, you can continue across wet and rugged terrain while giving the toes ample room to flex and bend. 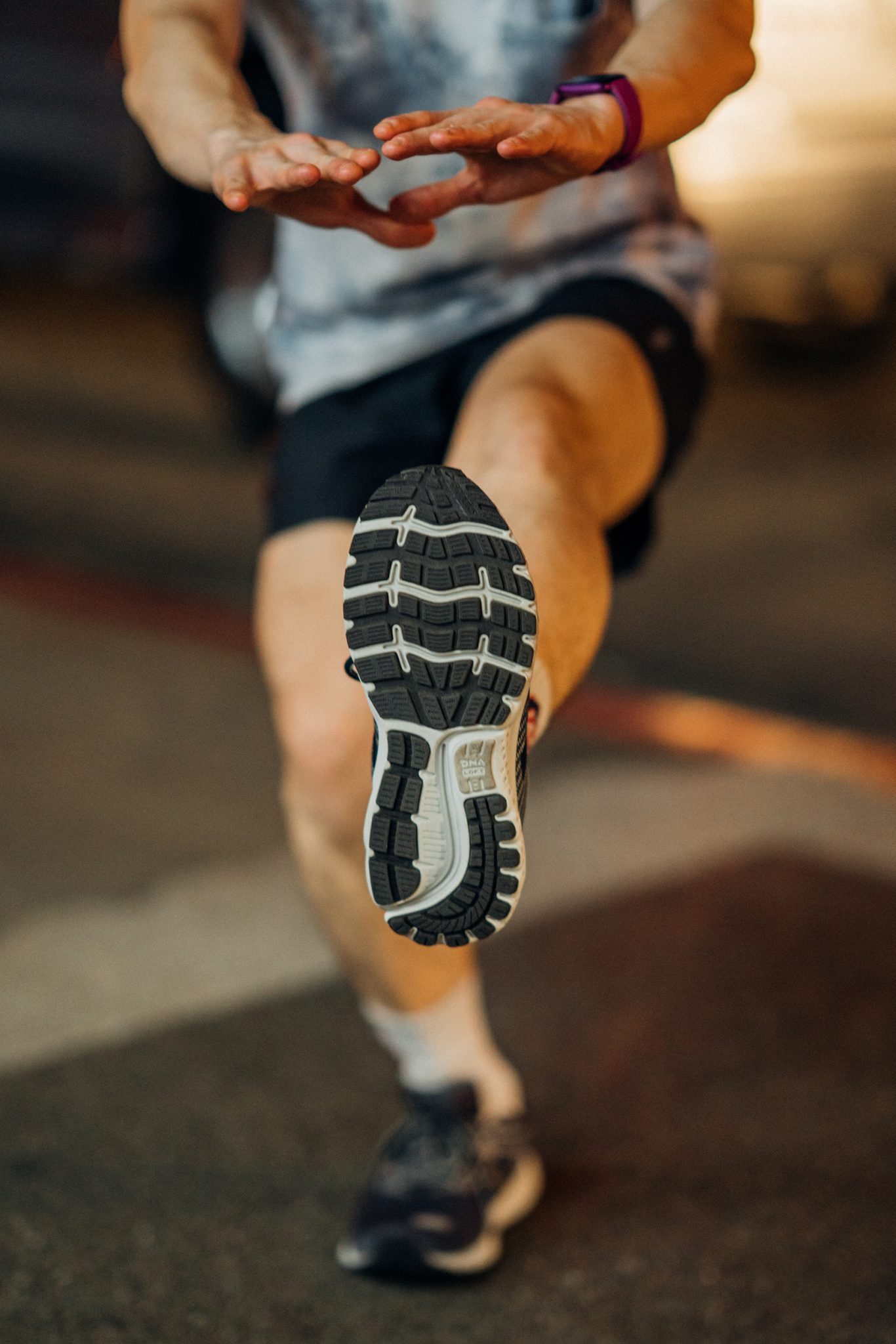 The Brooks Ghost 12 is a fantastic running shoe. Delivering both comfort and stability, you can run five to 10 kilometers or beyond without calf discomfort, tendon burn, or jarred toes.

Forefoot runners might need some time adjusting to the curved shape. It does a marvelous job of rolling the foot forward for mid-foot and heel-strikers, but for those stepping almost completely with their toes, you’re bound to hear the clop, clop, clop sound of feet slapping the ground rather than rolling against it. This isn’t a terrible thing and for those running at a heightened pace for the course of a short run, this is expected.

With looks that quietly exude real deal running shoe without the eccentricity of a Hoka One One or the yes I’m technologically jacked of Asics, the Ghost 12 is a terrific choice for mid- to long-distance runners seeking smooth rides and comfy calves. Used as an everyday trainer or as a recovery shoe for days when you’re not looking to set a world-record pace, the Ghost 12 make an incredibly soft and stable addition to your running shoe repertoire.