Like many people, I have an impersonal fondness for ice hockey. Which is to say that I know almost nothing about the sport but somehow still revere it on account of the impossible acrobatics performed on the rink, which seems to promise nothing but cold bruises. It’s the hefty gear swiftly gliding back and forth across the ice, and the hockey puck being both an anonymous and crucial cog in the game that, without fail, put me in a state of simultaneous awe and worry.

These are irrelevant, but I only say them to get at our collective cluelessness about the sport, which is perhaps the best entry point to getting to know our national ice hockey team: It wasn’t until 2008 that organized leagues and an unofficial Philippine team started participating in regional tournaments, and then eventually there was The Federation of Ice Hockey League (FIHL), the official governing body of Philippine ice hockey.

Where does the Philippines stand in Asian hockey? The question could be answered by two ends—the team and the nation. For the former, we’ll have to wait for a few more years for a definitive answer, but it’s certain, days before the 30th SEA Games, that they’re off to a good start. As for us, a good place to start is the simple recognition of our athletic potential beyond basketball

Led by Francois Gautier, the federation has helped create what is now the official national ice hockey team. The years that followed saw the FIHL doing the necessary bureaucratic work (becoming an associate member of the International Ice Hockey Federation, being recognized by the Philippine Sports Commission and the Philippine Olympic Committee) and sealing the kind of athletic milestones that would surprise any Filipino.

(Can you blame us? We live in a tropical country. And then there’s our obsession with basketball.)

I’m talking in particular about that historic day in 2017, where, at the 29th SEA Games, the Philippine men’s ice hockey team ended their campaign, undefeated, with a 5-4 record against Thailand to take home the gold. This is the first ever ice hockey gold medal in the history of the regional tournament (as this was the event’s first staging), yet nobody, at least in the champions’ home country, seemed to be talking about it. To be fair, there were reports. But the victory deserved more attention, not just because it was obviously a significant moment in Philippine sports history, but also because the odds were stacked against Gautier’s team. Or so it seemed that way.

The Philippines versus Thailand game would go on to be dubbed as “Miracle on Ice.” The game, at least it seemed from the outside, was impossible: Thailand, at that time also undefeated, was widely considered to be one of the stronger contenders in Southeast Asian hockey. What were the chances that the Philippines, newcomers who had yet to earn their place in the world of regional ice hockey, would defeat the Thais, the pre-tournament favorites? “They [Thailand] were supposed to be the better team,” said Petronilo Tigaronita, the Philippine men’s ice hockey team manager. 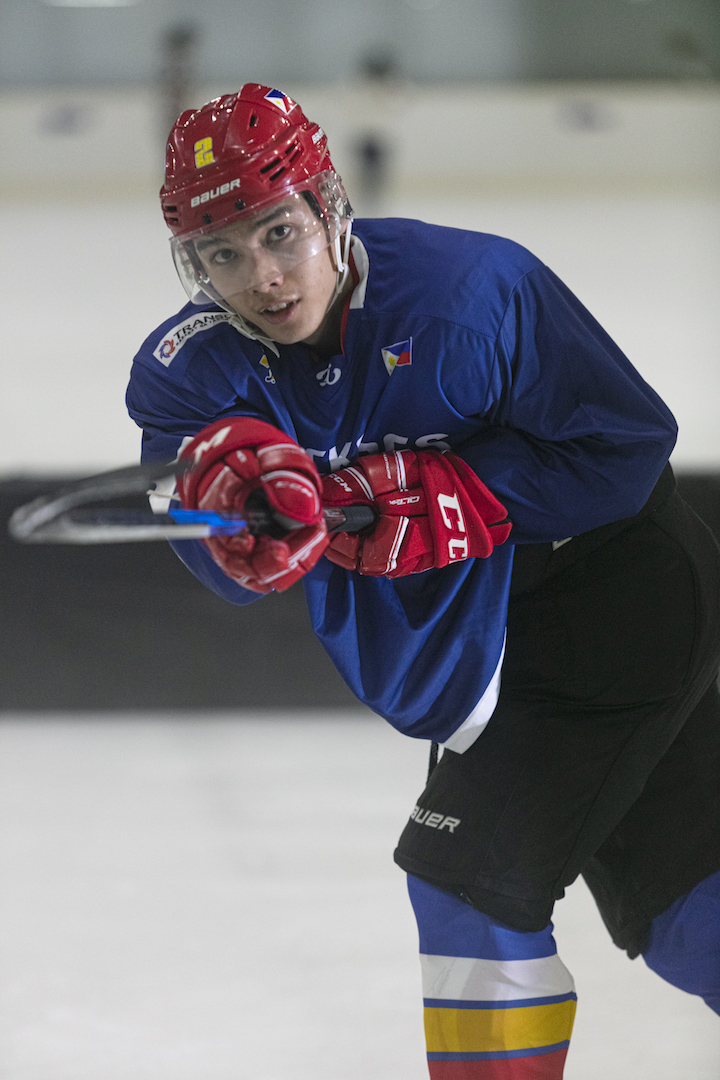 But in fact if you were there to witness the so-called miracle, what transpired on the ice suggested nothing of the sort. If the Philippine team was supposed to be the underdogs in that match, then the term had failed to define them: Until the last five minutes of the game, Gautier’s team had a two-point advantage. Thailand did manage to score one more goal at some point, but the Philippines’ defense game was just too strong.

And so in the end they took home the gold, which, at the time meant nothing but good things. A year after the game though, the victory took on a more complex character. If the pressure placed on the Philippine team during the 29th SEA Games was little to nothing, expectations (both of the team itself and everyone around them) for the upcoming games are a lot higher this time. Such is the case if you’re defending a title on your home soil.

“We were all in the locker room, very serious, very nervous. No one talked at all,” Lenard Rigel “LR” Lancero II, one of the national team’s forwards tells us, recalling what happened moments before the match against Thailand started. At the team’s official training rink, we meet LR: bag in hand, hockey stick and helmet neatly parked at a corner. He’d gotten to the venue early. The guy was reserved, accommodating, greeting each one of us as he took a seat and I briefed him about what the plan was for the shoot, which comprised of him telling us what happens in a regular day of training. 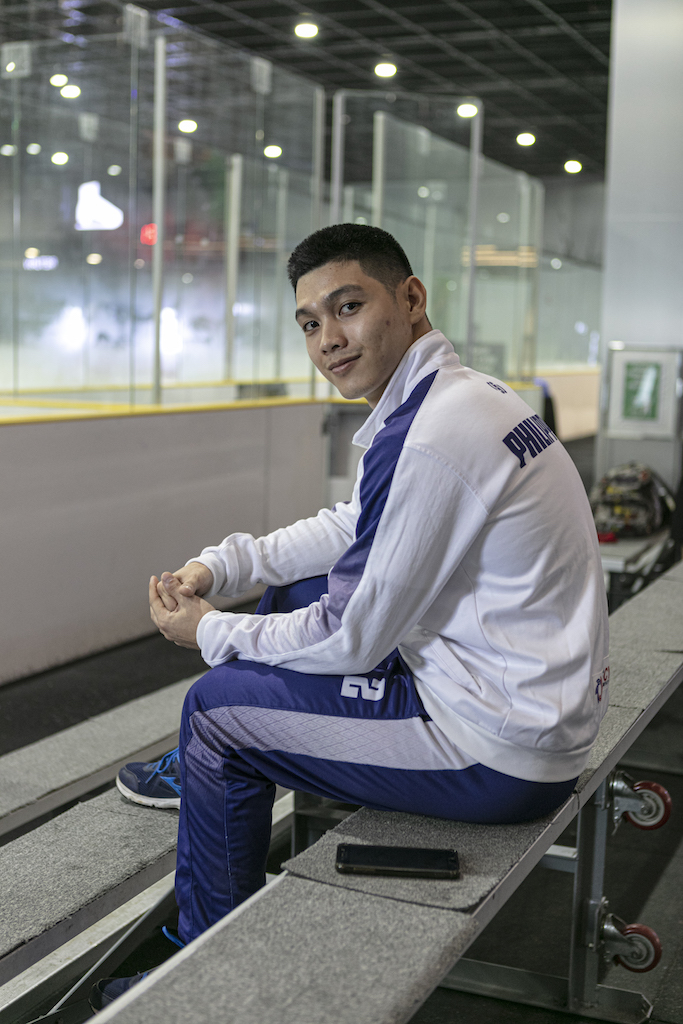 It was like asking a stranger how he spends his day, expecting nothing in particular but ending up being pleasantly surprised by the simultaneous uniqueness and ordinariness of their story. LR was three years old the first time he stepped onto an ice rink. “It was love at first skate.” Much like the ice hockey team’s SEA Games win, that specific moment was given a name. He had always been active, dabbling in sports like triathlon and formula one racing. But ice hockey, something he had naturally gravitated towards after ice skating, is his main sport. It always has been.

At the rink that day, where, LR tells us, Learn to Skate programs are offered and many hockey players and figure skaters got their start or trained at least once in their careers (including three-time national champion Sofia Guidote), there was some sort of division. A neat line of box cushions separated a third of the rink from the rest of the bigger and rougher space where both casual skaters and athletes skated.

The smaller, secluded portion was designed for, at least that day, ice hockey: A net stood at one end of the rink, receiving the pucks sent flying by LR, who, for his part, turned into a force of just laser-focus intensity. Up close it was as viscerally shocking as it was impressive, owing mostly to the sounds the pucks would make as they hit the net—like successive gunstarts at an Ironman event. The full contact sport is notable for carrying a higher risk of injury compared to other contact team sports, given that players move at estimated speeds of 20-30 miles per hour. The gear—skate blades, and hockey pucks and sticks—could all potentially cause injuries. 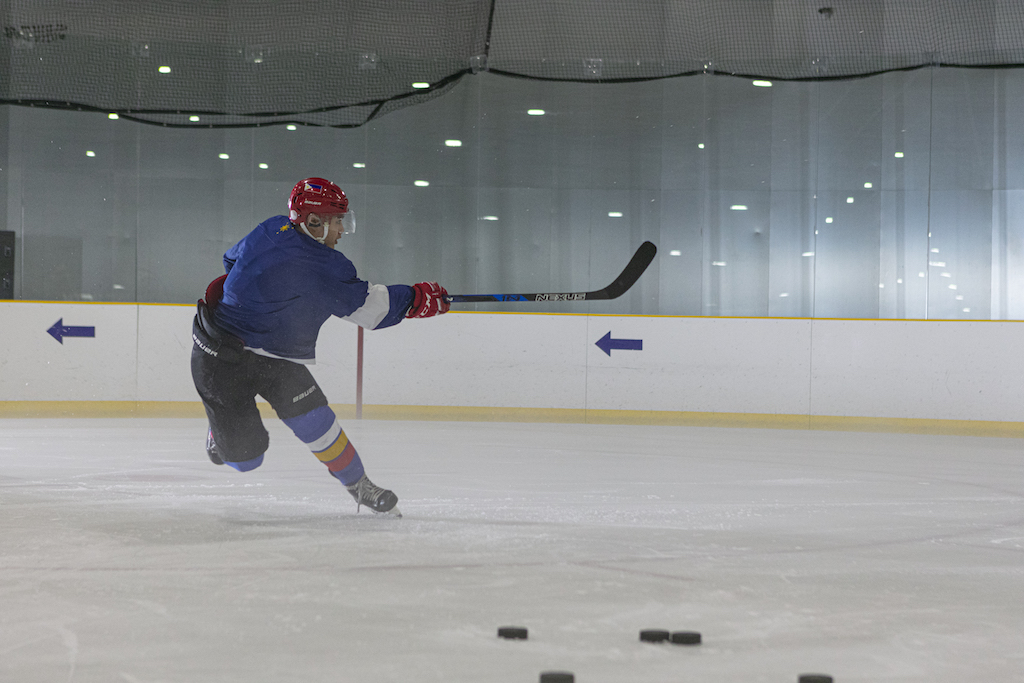 I wondered how closely LR doing simple drills on the rink that day resembled the team’s performance versus Thailand, if it at all could provide a glimpse of the noise and intensity and thrill we missed when the team made history in 2017. The 24-year-old forward recalls a pivotal moment in the game: “In the last few minutes of the match, I remember skating towards the puck at one point—it was a chance to make a goal, but the defenseman got me. I decided to pass it to one of my teammates. He saw an opening and then he scored. We were two points ahead (5-3). At that moment we knew we won the game.”

Like the rest of his teammates, LR has a few thoughts about what it would take to defend their title on their homecourt. “We’re both confident and nervous…I’m thinking about how all the other teams have been training since last year. Also, I’m pretty sure Thailand wants revenge, so we’ll need to stand our ground.”

The Flame in the Cold

A tropical country, for some reason, has no business playing ice hockey. That’s the illogical, and, frankly, false reasoning behind the supposed main disadvantage of Philippine ice hockey. It also happens to be the central idea behind the team’s campaign. Liyab sa Lamig (The Flame in the Cold) takes this supposedly incompatible juxtaposition, and subverts the message by emphasizing the contrast between the two elements: They were fire on ice, igniting hope and born out of hard work.

Where does the Philippines stand in Asian hockey? The question could be answered by two ends—the team and the nation. For the former, we’ll have to wait for a few more years for a definitive answer, but it’s certain, days before the 30th SEA Games, that they’re off to a good start. As for us, a good place to start is the simple recognition of our athletic potential beyond basketball.

The ice hockey tournament will be held at the SM Ice Skating Rink in Pasay, from Dec. 1 to 8. The Philippine team will play a five-team round-robin competition followed by semi-finals and medal games.

SEA Games 2019: Some of the best Filipino superstars to watch out for