Now 56, Robert Blodgett is keen on conquering his next biggest challenge: Riding 1,000 miles from Houston to Orlando

Photos by Dave Panganiban and courtesy of Robert Blodgett

Robert Blodgett fell into cycling out of necessity growing up on a small peninsula in Massachusetts. “If you didn’t own a car, your only options were to walk, hitchhike, or ride your bike.”

A high school girlfriend lived in a town 15 miles away and making the ride back and forth became a regular commute for Blodgett who, by the end of his junior year, was so hooked on riding his bike that he decided to ride it cross country all summer long, with no planned route or agenda.

“I’d start at about five in the morning, ride until it got too hot, take a nap somewhere, then ride again into the evening,” he says, explaining how he’d pitch his tent wherever he could, and stop in a town for a few days to take up dishwashing when he ran out of money.

“All I planned was that I’d stop to visit my sister in Illinois,” he says, but that one plan got foiled. In an attempt to take a shortcut around the Great Lakes, Blodgett tried cutting into Canada but was stopped at the immigration border. “I was 18, all alone, with no money and no passport. They didn’t let me in. I had to go back down and ride through central New York.”

That summer, Blodgett rode through the White Mountains of New Hampshire, the Green Mountains of Vermont, and through national forests, covering about 1,000 miles over two months. “It was just me and my bike, and that was it.”

After moving to Texas in 1982, Blodgett sold his bike, unable to tolerate Houston’s hundred-degree heat and crippling humidity. He didn’t ride for 35 years. On Sept. 11, 2012, Blodgett suffered a severe heart attack, a shocking scare to his loved ones, but ultimately unsurprising, considering his struggle with obesity and type 2 diabetes leading up to it.

Following the heart attack, Blodgett finally took up riding again, this time with the help and encouragement of his oldest son. “It helped with my weight and cardio, and I started to feel stronger and faster, walk straighter, and have more vitality. [When I ride], I just feel better overall,” he says. Post-heart attack progress was slow however. “When I first started riding again, I would go about eight miles an hour and in those first days, I’d be happy if I did a mile.” 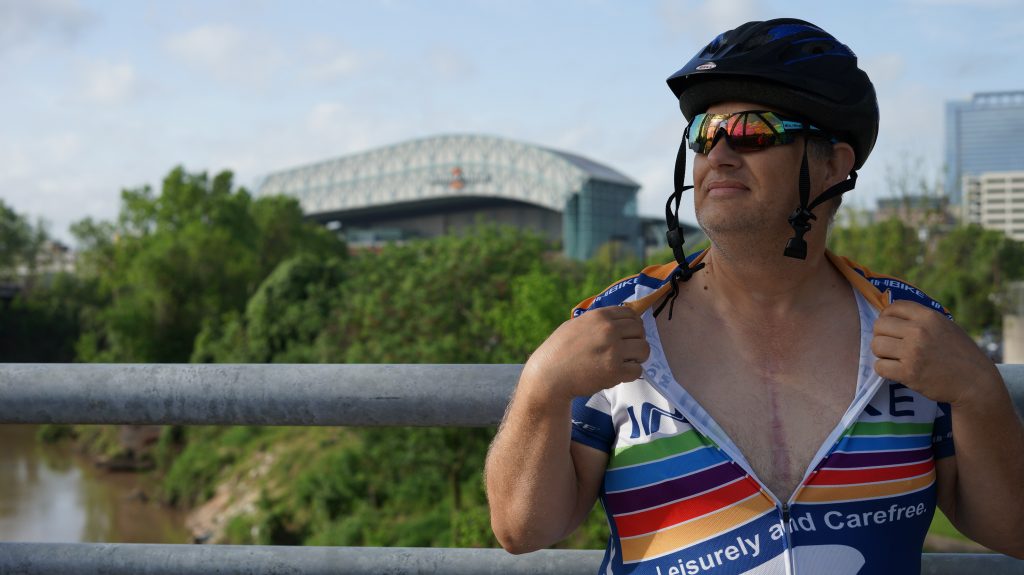 Showing off his scar from the heart surgery

Blodgett eventually worked his way up to a 17 mph/20 miles a day average when, in the summer of 2015, while riding, a collision with a truck broke his collarbone and kept him off his bike for a whole year. While he was still in much better shape than he was after his heart attack, it was still a huge setback for him, putting him back “not at square one, but I’d say square three,” he says. Still, he persisted, and now rides 20 to 40 miles a day at about 16 mph, with the ultimate goal of getting his pace up to 20 mph and riding from Houston, Texas to Orlando, Florida—a journey of about 1,000 miles.

Houston is a city of bayous, designed that way to offset flooding from the billions of gallons of water that pour into the city every hurricane season (take note, Manila). The bayous, which run throughout the sprawling metro, are all connected, landscaped, and lined with paved bike trails, known only to a fraction of Houston’s residents, particularly to the city’s most serious riders. These bayou trails, as well as weekend excursions into the Texas countryside, is where Blodgett gets most of his training today. In his cycling pack at all times are fast-acting medicines for chest pain, clotting, and hypertension. 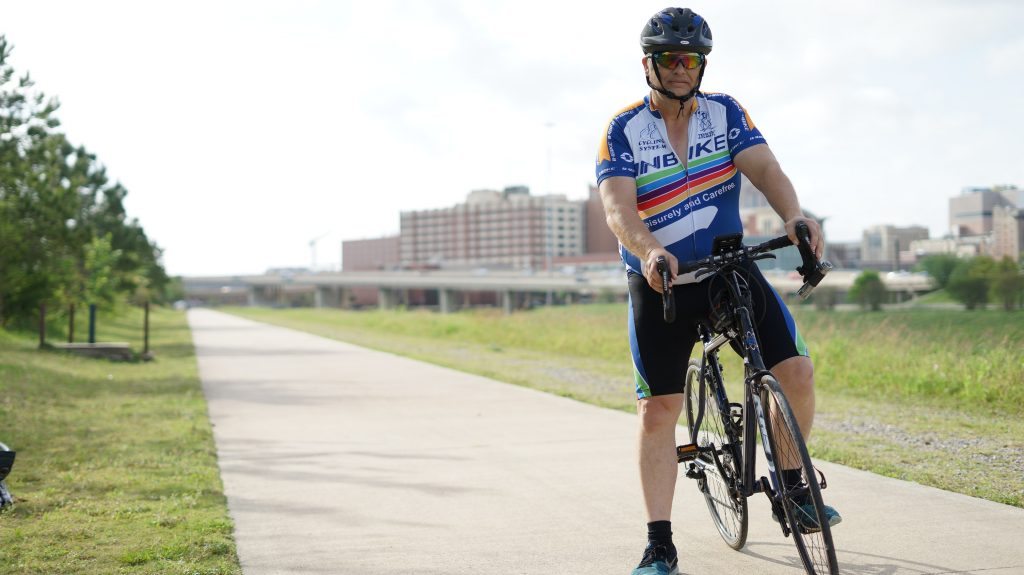 “My heart attack gave me a whole new perspective on life,” says Blodgett. “I know that at my age, I’ll be lucky to have a good quality of life for another 20 to 25 years, but I also realized after the attack that I may only have another 20 minutes. I’m doing everything I can to lengthen that for my family.”

Blodgett grew up in a struggling family without a dad, and so “my strong sense of family comes from Florencio Menodiado, the greatest man I ever knew,” he says, referring to his late father-in-law.

“He’s the one who taught me how to be a father and more importantly, how to be a dad—and now, a lolo.” Most recently, Blodgett has extra motivation to keep riding and to stay alive and healthy for as long as he can—for his first grandchild Siena.