Key takeaways from our time training with a national triathlete

When you hear stories about your personal heroes’ teenage years, it’s not exactly their decisiveness that stands out. Which can be comforting: It helps to know that everyone once felt just as lost as you may be feeling now.

At least not in a conventional sense.

From a young age, he was sure about his love for sports. He ran a lot, joined the college swimming team, and participated in fun runs. He had a thing. An identity. He was the sports guy. Huelgas was so good at what he did, he was even offered to take a pass from school—at 19, he could opt not to attend classes and train for the Asian Games instead.

Which is where the indecisive bit of the story comes in. Nineteen-year-old Huelgas—who, at the time, could potentially become the youngest triathlete to compete at the 2010 Asian Games—could not conceive of the idea of putting his studies on hold to pursue something that he loved and was clearly very good at. 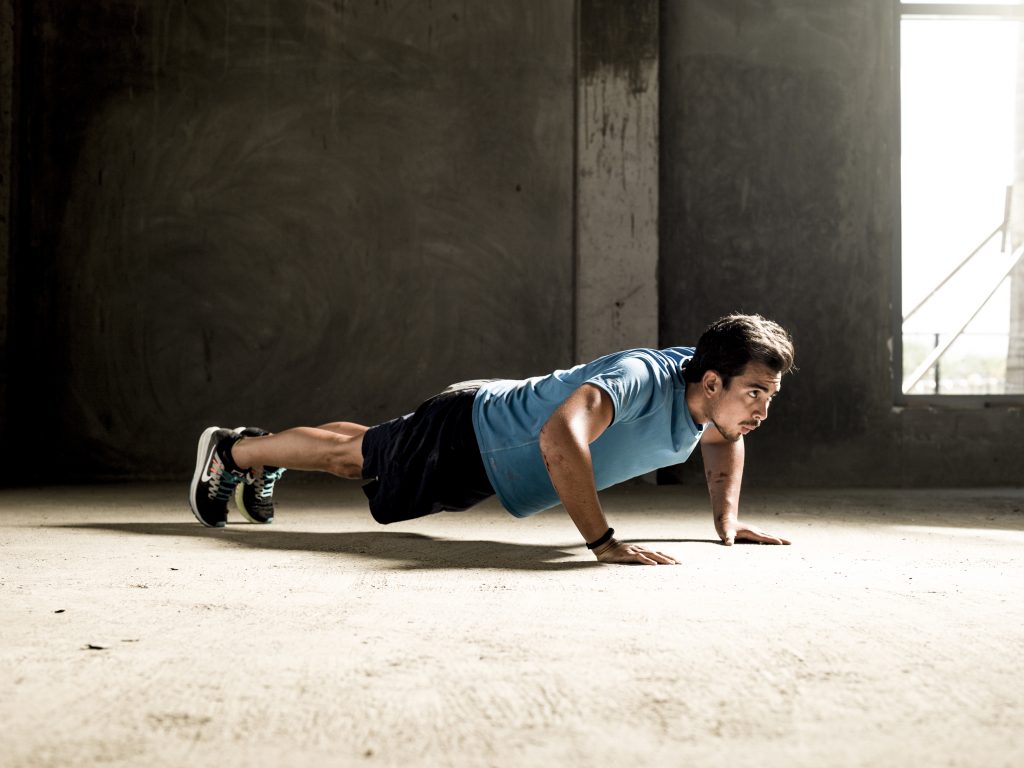 We meet Huelgas in one of the dressing rooms of Vermosa Sports Hub, Ayala Land’s latest one stop sports and fitness destination in Daang-Hari road, Imus, Cavite. Having greeted everyone upon entering the room, he sits, quietly alert.

“I realized that in life, taking risks is what will actually change you,” so goes one of his reflections on being a professional triathlete. It’s a line that, at least these days, is rarely spoken without the slightest hint of irony.

The particular risk Huelgas is talking about was his decision to take a leave of absence from school in order to train for and compete at the 2010 Asian Games. “I really valued school more than anything,” he says.  So then he sought out the opinions of friends and mentors. “Every single one of them said I should do it,” he says. And so he left school for a while and moved to Subic for a five-month training program.

“I lived with people from different backgrounds, different cultures. Because of that, I started to see things differently. I valued my time more, I focused more on goals and experiences. It changed my life. ”

“I realized that in life, taking risks is what will actually change you,” so goes one of his reflections on being a professional triathlete. It’s a line that, at least these days, is rarely spoken without the slightest hint of irony

Huelgas’ mindset during his training for the Asian Games became the basis of his eventual work ethic as a professional triathlete. “Everything I did from that point on and also the way I made decisions—from deciding to train every single day to whether or not I should eat this or that—are shaped by my experiences in the Asian Games.”

It was in 2009 when everything changed. An athletic kid who grew up doing 1.5-kilometer runs in his village, Huelgas joined his first 5K run early that year. Clocking in at an impressive 19 minutes, he was encouraged by the host of the event (who happened to be a national triathlon coach) to join aquathlons and eventually, triathlons. What he thought about the whole thing then was that it was simply a matter of “adding one sport to another.”

“Around May that year, I bought a bike, and by June, I did my first ever triathlon.”

Before we head outside the room and have Huelgas try out the hub’s facilities, we sneak in a question: What was his advice to people who wanted to be a full-time triathlete?

“You have to test the waters. It’s about trying to know where you can get an opportunity to stand out in the sport. Find out which category suits you, whether it’s XTERRA, Olympic distance, or 70.3. Also, it’s really not about the goals or success. It’s about specific habits that can create a system. When you follow a system, tuloy tuloy na ‘yan eh. Whether or not you have a specific goal, you will improve if you develop the right habits.”

2. Running as a Discipline 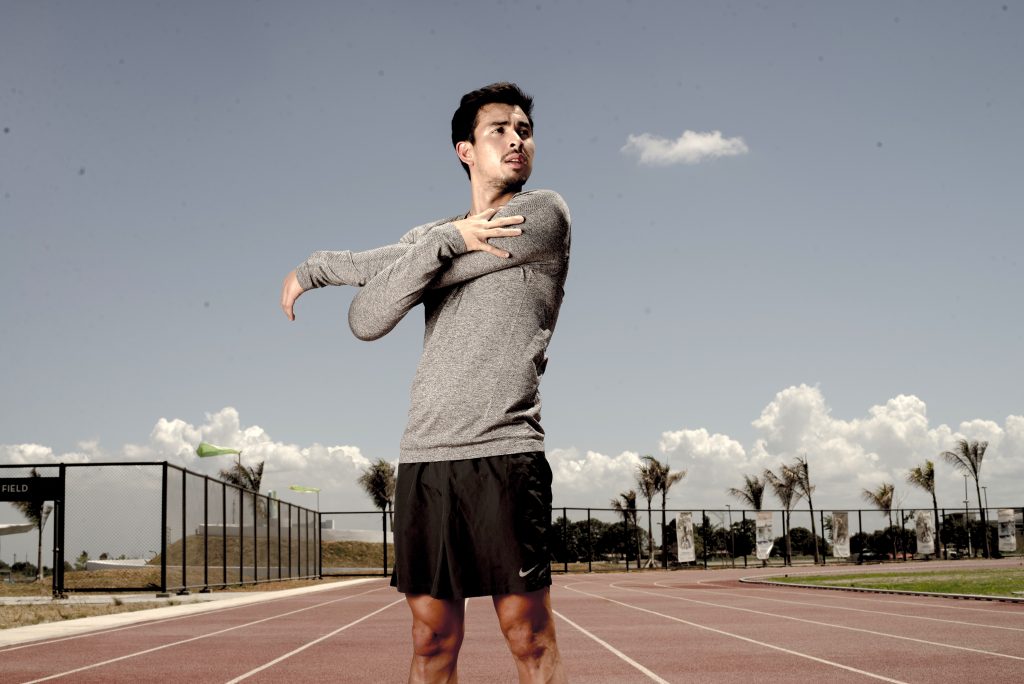 Journalistically speaking, there isn’t much exciting news to offer about Huelgas. At least ones that triathlon fans have not already heard of. It’s all a Google search away: the fact that he was the first ever Filipino athlete to win the SEA Games gold in Men’s Individual Triathlon, his stint as a DLSU Green Tanker back when he was a college student, and his occasional gigs as a motivational speaker.

To get a better sense of Huelgas beyond these facts, a good strategy may be to take the place of a spectator and see how he trains. Sports poorly translates itself into words and is more impactful as a visual medium—“a venue for the expression of human beauty,” as the late David Foster Wallace wrote in a 2006 piece for The New York Times titled “Roger Federer as Religious Experience.”

The kind of beauty Wallace talks about is separate from sex or cultural norms. It’s something more raw and universal and has to do with “human beings’ reconciliation with the fact of having a body.” Kinetic beauty, he calls it.

Huelgas stands tall and walks with an ease that translates across the three different sports that have come to define his life. There’s a fluidity to his strides and strokes—they happen fast and successively, undisturbed by lulls and sharp motions. It’s grace, simply put

It’s evoked differently from athlete to athlete. Huelgas stands tall and walks with an ease that translates across the three different sports that have come to define his life. There’s a fluidity to his strides and strokes—they happen fast and successively, undisturbed by lulls and sharp motions. It’s grace, simply put.

A couple hours after meeting him, we finally head to the Vermosa Sports Hub’s football-field equipped nine-lane track oval—the first of its kind in the Philippines.

The heat and wind, coupled with sporadic sprinklings of water (a number of sprinklers surrounded the track oval), at times obscured our vision of Huelgas pacing the track and confidently demonstrating swift half-jumps and pre-run stretches. But the weather hardly mattered. The bleachers set up on one side of the 400-meter oval are the perfect seats from which to watch races in the track. We still saw it all: the grace, the ease of movement.

Running is almost second nature to Huelgas, confessing that it’s how he stays fit when he’s not training for a competition.  “I definitely try to wake up early in the morning. I really make it a point to finish my workouts very early. It gives me a good feeling. So after waking up early, what I would do is run on my own around my village. It’s something I’ve been doing since I was in fifth grade.” 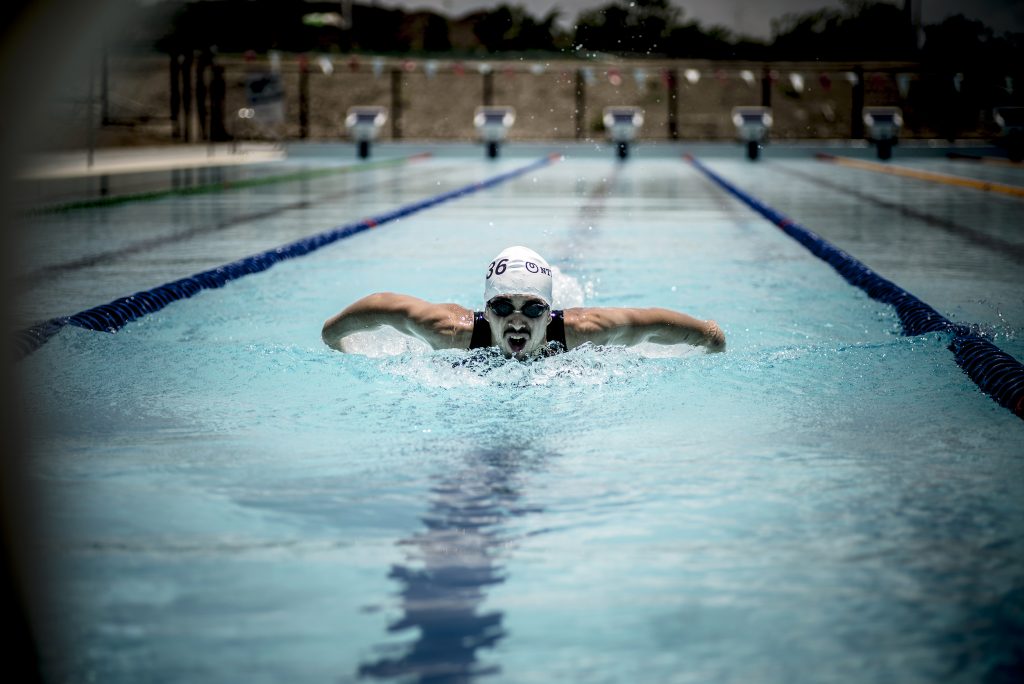 It hasn’t been more than half an hour and he is taking his bicycle onto the track. He slides his feet into neon yellow cycling shoes, puts on a helmet, and for a few seconds evokes the characteristic intensity of a cyclist in the middle of a race. And before we know it, he gets off his bike, hovers by the bleachers, and tells a story (by way of an explanation) we all may or may not have been curious to hear about the moment we met him in the dressing room.

The story is about his arms and why they are strewn with scars. The explanation had something to do with jellyfish stings. Why so many scars? “Maraming jellyfish eh, so marami ring sting,” he says with a laugh.

At the Santé Fitness Lab, a complete fitness shop that will soon include a sports rehabilitation area and a dance studio, Huelgas willingly repeats the same warm-ups and stretches, exuding the same swiftness and professionalism.

“Swimming is the most demanding in terms of endurance training. When I was in high school, I would do about two hours of swimming a day. And then by college, I was doing three hours. That’s how I got to really develop my endurance and make a proper transition to competing in triathlons”

Out of the three sports he has come to master, it’s swimming that gave him the toughest time. “It’s the most demanding in terms of endurance training. When I was in high school, I would do about two hours of swimming a day. And then by college, I was doing three hours. That’s how I got to really develop my endurance and make a proper transition to competing in triathlons.”

It was a few minutes past noon when we get to the 10-lane Olympic-size lap pool (which is complete with Antiwave Starting Blocks as well as a timing system). We settle by the poolside, just across the spacious washrooms, and braced ourselves. For what exactly, it was hard to tell. We had already seen a fair amount of athletic prowess that morning. And then Huelgas does a forward dive. The split second suspension that preceded his body hitting the water—that was kinetic beauty.

Much like running, swimming is an important component in Huelgas’ fitness routine, regardless of whether or not he’s training for a triathlon. After running in the morning, he makes it a point to swim in the evening.

4. Getting over the Hump 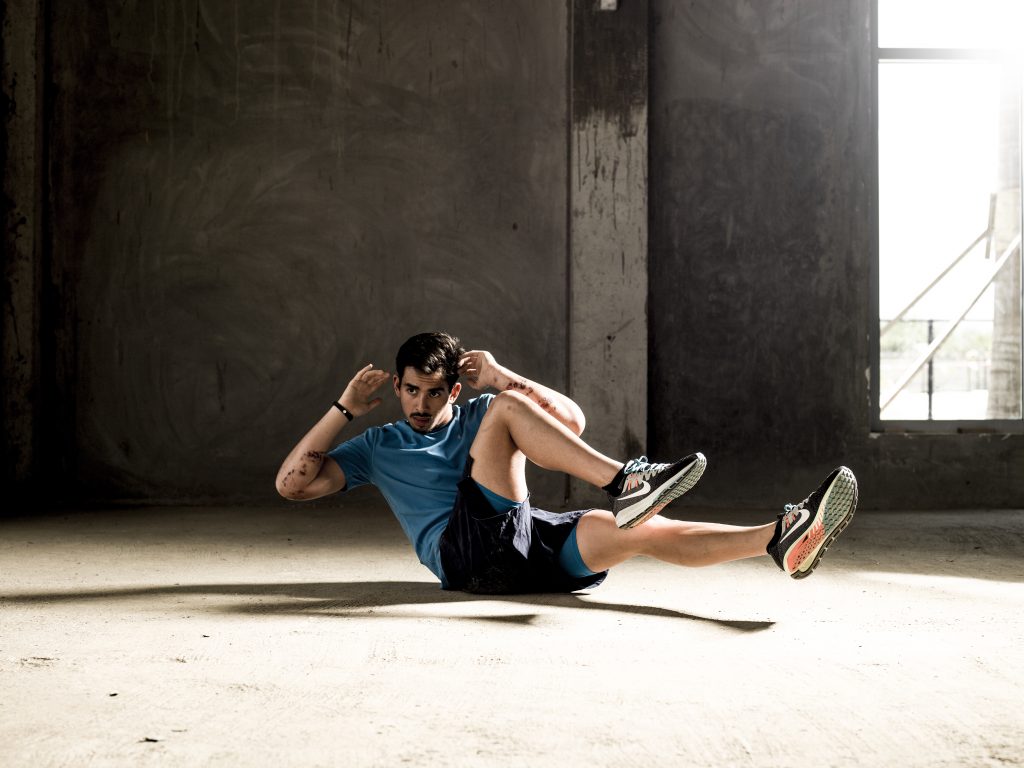 But what did he do when he simply didn’t feel like training on certain days? How should one cope with what the writer and runner Haruki Murakami calls the “runner’s blues?”

“That’s normal. It’s like work, really. Not everyone wants to show up, but you need to try to [show up] anyway.”

The pragmatism of an athlete, we discover after speaking with Huelgas, has a lot to do with platitudes. Huelgas tries to train every single day, believes that “everything revolves around habits,” and encourages aspiring triathletes to “leave your comfort zone.” Self-discipline, honest hard work—these were the plainest, most obvious yet maybe the most effective components to an athlete’s success. There’s almost nothing profound or mystical about the whole ordeal yet we watch athletes like Huelgas in the middle of a game, and we are in awe.