Medvedev battles back to win second title of the year

Daniil Medvedev celebrated becoming a father for the first time earlier this month with his second ATP title of the year after beating Canada’s Denis Shapovalov 4-6, 6-3, 6-2 in Sunday’s final in Vienna.

The 26-year-old former world number one dropped his first set of the week as Shapovalov produced some eye-catching tennis by firing down 21 winners.

However, Medvedev—whose wife Daria gave birth to a baby girl on October 14—did not buckle and stormed back to level the match with some terrific shots of his own.

The third set was a procession as the Russian broke Shapovalov several times and eventually took the title with his sixth match point. “I am really happy,” said Medvedev, who had reached the quarterfinals on the only other occasion he played in Vienna. 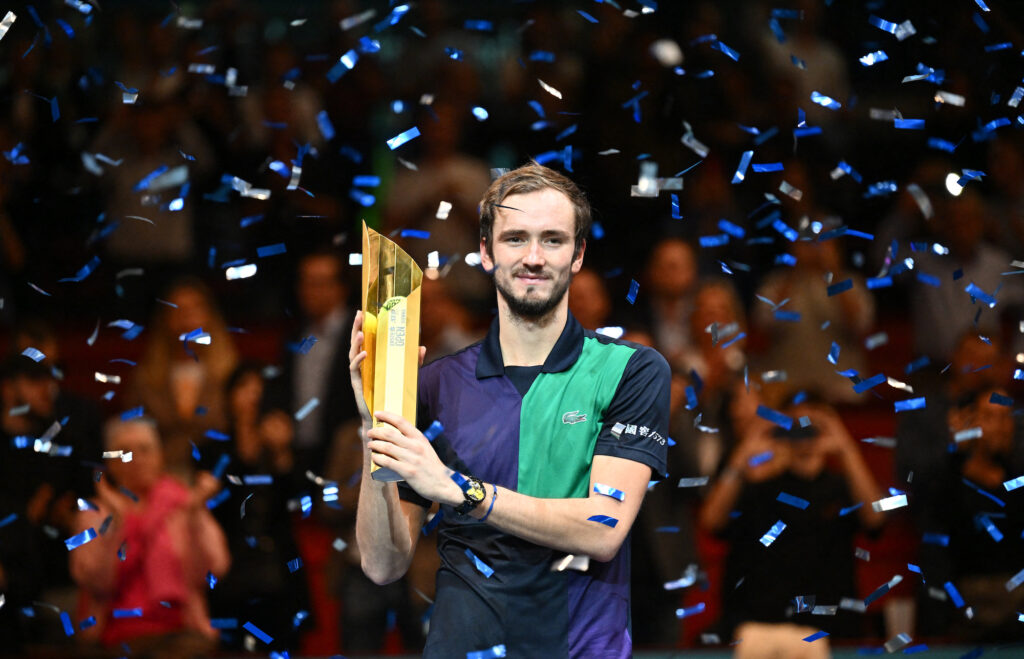 Daniil Medvedev holds the trophy as he celebrates his victory over Canada’s Denis Shapovalov after the final match of the ATP Vienna Open tennis tournament in Vienna, Austria

“This match was the best of the week because Denis was really playing unreal until probably 4-3 in the second set. He dropped his level by maybe two percent and I was able to use it.”

“This is one of the best victories when you know your opponent is on top of you, but you try and stay there and do what you can.” Medvedev’s 15th career title sets him up nicely for the final two targets for him this season.

First up is the Paris Masters, where he was runner-up to Novak Djokovic last year, which gets underway on Monday, and the ATP Finals in Turin on November 13 to 20. Medvedev won that event in 2020.

“I like to play indoor hard courts at the end of the season,” said Medvedev. “I feel that I do a great job with my team not to arrive burnt out.”

“I am looking forward to the last two tournaments of the year, which are really important and I usually play well.”

For Shapovalov, it his second loss in a final this month after he was beaten by Japan’s Yoshihito Nishioka in Seoul and the defeat leaves him with just the one title, in Stockholm in 2019.
© Agence France-Presse

Rising Rune reminds me of myself, says Djokovic

Zverev says he would deserve ban if he loses temper again

Prepared Medvedev ready to beat anybody in Australian Open

How did Djokovic get into the Australian Open?