How did you get into triathlon, seeing as you’re the newest among the people in this shoot?

Yeah, I’m the newest, in TriMac especially. I got into triathlon because coach Jojo Macalintal is a friend of mine from back in 2008 or 2009. My family was enrolled in a gym where he teaches spinning class. So we got together and he recruited me. But it took a long time; I was just 15, 16 back then. My interests weren’t aligned with triathlon yet. But last year, I contacted him and said, ‘I’m going to start triathlon with you.’

Why did you get into triathlon last year?

In 2012, I injured my left elbow and left wrist in basketball. Back then, I was a dragon boat paddler for De La Salle, then I got injured. I took a long rest, around four to six months, and I didn’t really get back to dragon boating. I realized—it was something of a reflection time for me since I was injured—that I haven’t been much of an individual athlete. I’ve done ultimate frisbee, dragon boat, basketball, soccer, all team sports. I realized maybe I can do more.

Sa team sports kasi, ang frustration diyan, some of [the other players] are not really dedicated at the level that you are, so ang commitment levels niyo, [different]. Mahirap manalo ng championship kung lahat kayo hindi naman committed. Sa triathlon kasi natuwa ako—it’s either you can, or you can’t.

What’s your biggest achievement so far in your entire sports career?

It was good, but I had a bad game.

Can we consider you finishing your first triathlon as a big achievement?

How was the transition into triathlon?

I think the biggest transition was in terms of difficulty—triathlon is not basketball where you can play pickup games and just shoot around; it’s something you have to prepare for physically and mentally because it’s three different sports in one event. So it’s physically and mentally demanding. The biggest transition I made was the lifestyle. I was used to training almost every day but not to the intensity that you need to finish a triathlon.

So what’s your training program now?

I train almost every day. I just have one rest day for the week. Monday—brick, strength training in the gym. Tuesday—run, gym. Wednesday—gym, swim. Thursday—long break. Friday—gym, swim. Saturday, Sunday, I can choose to have a long ride or a rest day. 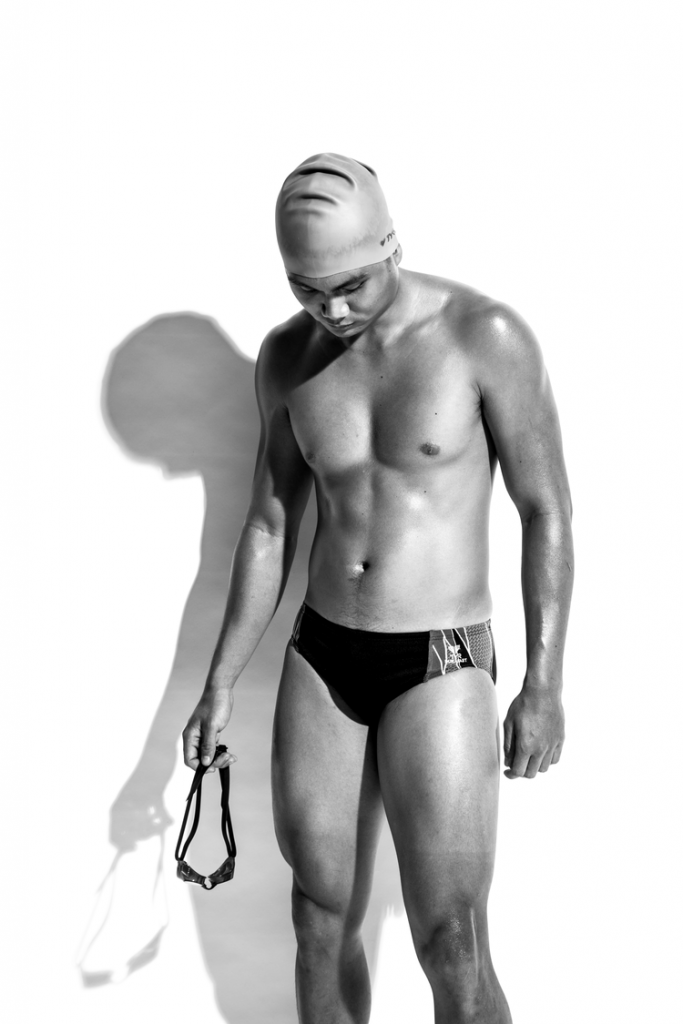 What’s your training mileage in a week?

What about your diet? Do you watch what you eat?

I’m sure you’ve noticed in a race, not all triathletes are lean. Triathlon caters to all kinds of body types. Is it safe to say that triathlon influences young people who are intimidated to get into the sport?

Yeah, I think it makes the face of the sport less intimidating. Sometimes you watch sports like UFC or boxing, where everybody’s ripped, and you have to put out lots of power and go to the gym. But I think our generation now is more somewhat sport-friendly. Or the reverse: the sport is now people-friendly. You see people of all sizes and all ages, they really have the inspiration and motivation to do the sport. It makes the sport less intimidating, and that’s a big factor when people look at the sport.

But I think our generation now is more somewhat sport-friendly. Or the reverse: the sport is now people-friendly. You see people of all sizes and all ages, they really have the inspiration and motivation to do the sport. It makes the sport less intimidating, and that’s a big factor when people look at the sport

Have you ever felt self-conscious about your body?

I won’t say I have body issues, but sometimes I’m conscious about how my body looks. I look at it this way: when you see someone ripped or beefed up, it’s the easiest way to judge the person’s lifestyle. You see six-pack abs or ripped arms, you can easily say that he goes to the gym. So I guess, personally, the image I want to show is that of someone healthy.

So image is not a big deal for you.

Yeah. I saw Nikko Huelgas, he was the first Filipino triathlete I saw and he’s really thin. But when you see him swim, bike, and run, there’s nothing to say. You don’t care about what he looks like. At events like Tri United 1 and Bi3, you can see everybody enjoying and you have these not-really-fit people trying to finish the race. For me, that’s better than having image issues with yourself.

Some say that getting into an active, healthy lifestyle is a form of vanity. Do you agree with that?

In some sense, yeah. If it’s image issues, self-consciousness, self-esteem issues, you want to somehow show yourself or prove yourself. If that’s a form of vanity, then I guess there’s nothing wrong with that.

For you, the vanity aspect is in fitness, and not image.