How to scale (and succeed at) Ultra Trail du Mont Blanc

Billed as the toughest mountain race in the world with only 40 percent of 2,500 entrants managing to cross the finish line, Ultra Trail du Mont Blanc (UTMB) is the most coveted ultra-trail foot race in the world. And why not? This is the only race that runs for 166 kilometers around the breathtaking bosom of Mont Blanc, traversing three countries in a single course.  The challenge of climbing not one, not two, but 10 summits, and scaling almost 10,000 meters in elevation through a terrain characterized by rocks, glaciers, rivers, and technical inclines and descents, is simply too hard for any trail runner to resist.

The UTMB’s rigorous screening process, which requires entrants to earn eight qualifying points by finishing sanctioned and equally hardcore races, ensures that only the fittest and the most qualified earn this coveted slot. Coach Miguel “Ige” Lopez is one of the worthy few who was given the chance to run the Holy Grail of mountain races. After all, the triathlon coach has proven that he’s got the chaps.

You are more popular as a triathlon coach and many may not be aware that you are an avid mountaineer and trail runner, too. How did your love affair with the mountains and trails start and what made you gravitate towards these extreme sports?

I started my love affair with the mountains when I was in college in DLSU in 1995. Five years after hiking several mountains, I discovered triathlon when a co-member of mine in AMCI mountaineering club invited me to be their run relay member in a half distance race in Matabungkay in November 2000. However, I never left the sport of mountaineering and mountain endurance sports. Even if I was doing triathlon already, I was still hiking, trail running, and backpacking. 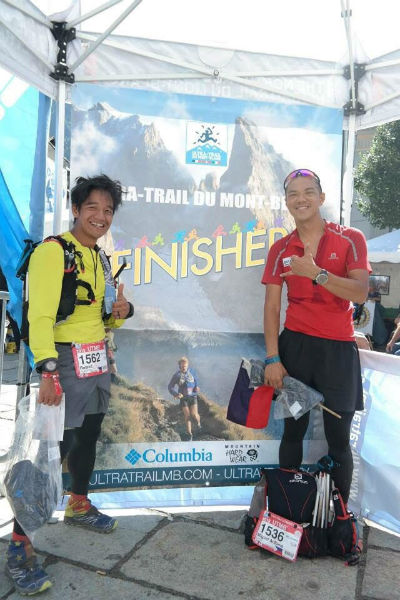 You had to earn eight qualifying points (nine for next year) to enter this race. How did you earn yours?

I had to qualify for the lottery in UTMB by acquiring eight points in three races in two years. I started getting points since 2012 however I had to finish certain multisport/triathlon commitments first before I focused solely on ultra-running and for UTMB by 2015.

How did you prepare specifically for what is billed as the “toughest mountain race”?

I had to focus on mountain trail running. However, I still love triathlon especially the long distance ones. I just had to treat them as long endurance sessions to prep me. So swimming and biking really took back seats to running and specifically mountain running. I focused on mountain running 12 weeks before UTMB. I had to run up and down several mountains for 12 weeks and a few stair-climbing sessions. Road running was still included as well as one to three-hour bike rides. I also made sure that I did some strengthening and core sessions once or twice a week. 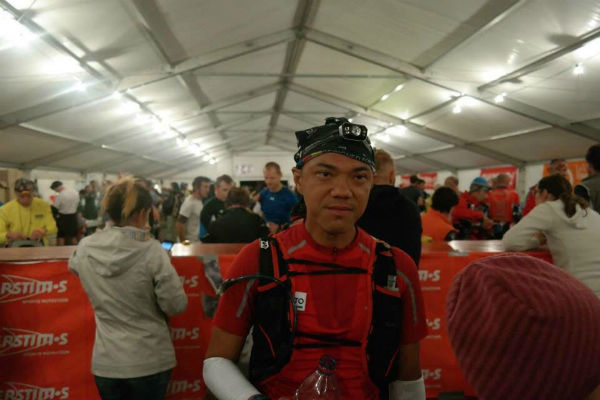 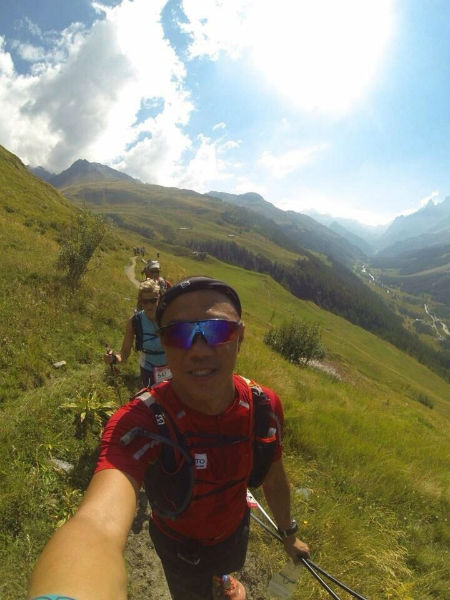 The beautiful mountain view on the Swiss Alps 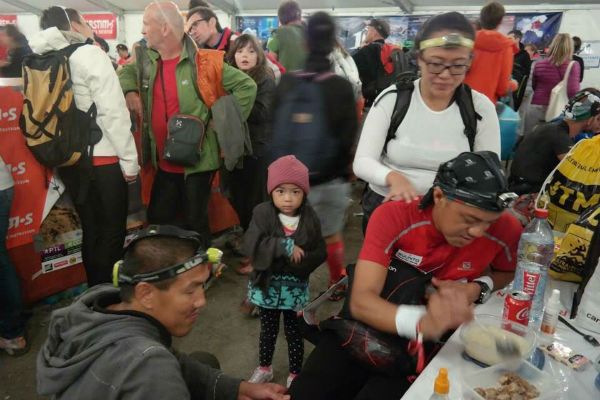 Getting a light massage from wife Maui as the daughter was waiting for Ige to start running again. Leo Oracion, first Pinoy to reach Everest summit, supporting/assisting at Champex Lax aid station

What did you personally find most challenging given the mountainous terrain and the weather conditions that go with it, and why? Were there instances when you almost gave up?

I have studied the UTMB course and have designed my own training program using race-specific workouts like multiple-hour trail runs up and down mountains ranging from five to 10 hours with only a hydration vest with me. However, training for the cold was quite hard here since there are no high mountains in the Philippines as high as the ones in the Alps where snow and glaciers are present.

I had to be creative with my training like trying to increase my cold temperature threshold. I also practiced my layering of clothes during the race in air-conditioned rooms. The biggest hurdle I had to face was battling sleep deprivation. This has been my weakness so I told myself I have to do sleep banking rather than training without sleep because you can’t really train efficiently if your body is sleep-deprived. So better to bank more sleep and conserve your energy all throughout the race and learn when to eat and drink to keep energy levels high.

Fortunately, there was not an instance where I wanted to give up. I knew there would be several highs and lows all throughout the race. I just had to manage my emotions well if ever I experience certain instances like tummy problems, dehydration, extreme cold at night and early morning, wet and muddy feet, and crossing multiple hours of rocky downhill sections.

The flow of the trail was undulating yet breathtaking.  I really loved the sunrise on my second to the last mountain in between Switzerland and France before I headed to the finish. The sun was slowly showing itself as I was going up the peak of Catogne (144km) at 2027 meters and you can see how the mountain unfolded itself with lush greenery, cows all over, mountains, and snowy peaks from afar. It was like one big painting that never ended as you ascended and descended that part of the mountain range

What personal realization did you get out of finishing the race that is not only hard to enter but much harder to finish?

For the 2015 UTMB we had to climb 11 peaks and scale a total of 10,000 meters. It was so daunting yet once you have done the race, you will reflect on your accomplishments and it will totally let your emotions out no matter what. I broke down in tears when I finished the race after 41 hours and 10 minutes. It was definitely mind over matter. 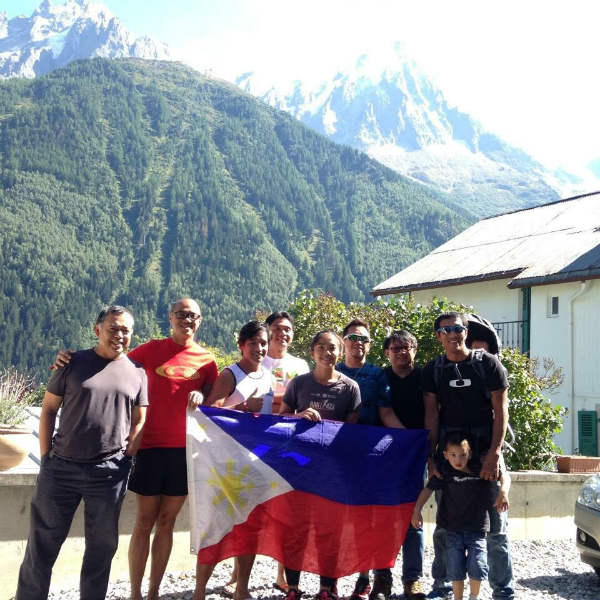 Our Pinoy ParisRunners support crew for the 2015 UTMB with Leo Oracion and his two sons Kaya and Lakan Tao. The three other Pinoy contingent namely Mia Constantino, George Javier, and Roland Wangwang. Xerxis Tan was also part of the contingent though he was not with us in the apartment we rented.

What lessons did you learn from the race that you can share to those who dream of conquering this ultra-trail run?

You cannot serve too many masters. You have to decide what you want to focus on. Specific training for a specific race is very critical to one’s success. Why train so much on the road if your race will be in the high mountain trails? Why eat big meals while training if during your race you won’t be able to eat big complete meals throughout the race? You have to design your program well where you progress your mileage and elevation safely without injuring yourself. Tapering and recovering from hard sessions is also important for you to reach your potential.

Never give up no matter what, no matter how futile you think your chances are. There will always be a window of hope. This, you mentally have to aspire for to keep you moving forward with determination. Moreover, teach your gut to accept and absorb anything you put into your mouth.