By Amy Tennery | Photos by Brendan Mcdermid and Jeenah Moon/Reuters

Do Nascimento set a blistering pace with a roughly two-minute lead around the halfway point but after mile 20 staggered forward and collapsed, stunning onlookers as police officers ran to assist him. Race officials later said he was okay and had not been taken to hospital.

“I was promptly attended by the race medical crew and I can assure you I’m already recovered,” Do Nascimento wrote on Instagram. “Unfortunately sometimes things don’t work out as we were hoping and planning.”

Chebet, who won in Boston this year, had accelerated around mile 15 and overcame obvious fatigue to produce a final surge to cross the finish in 2:08:41, crumpling to the ground and rolling on to his back. Ethiopian Shura Kitata finished second in 2:08:54 and Dutchman Abdi Nageeye took third.

“He said it was hard for him to race especially because it was hot,” Evans Chebet’s interpreter told reporters

“He said it was hard for him to race especially because it was hot,” Chebet’s interpreter told reporters. His win completes a Kenyan sweep of the six men’s world marathon majors in 2022.

Lokedi, making her marathon debut, stayed with the leading pack before pulling away in the final stages to win in 2:23:23. Israeli Lonah Chemtai Salpeter finished second in 2:23:30 and world champion Gotytom Gebreslase of Ethiopia took third.

“I’m out of words, I’m really excited,” said Lokedi, the eighth competitor to win the New York race in a marathon debut. “I’m just so happy that I did it here.”

The 28-year-old said she had no expectations that she would win the race and would consult her coach before deciding on another marathon. “I just wanted go and put myself in it and see where I’ll end up,” she told reporters. “Halfway through I felt really good.” 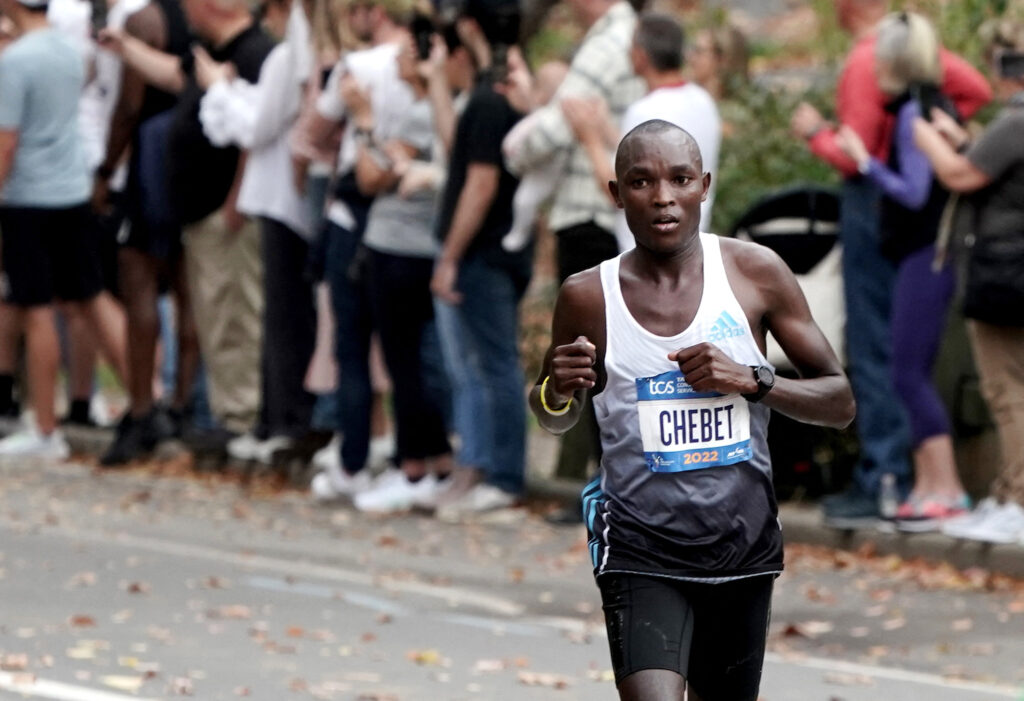 The year’s final marathon major was back at full capacity for the first time since the COVID-19 pandemic, with some 50,000 competitors hitting the streets and thousands of people congregating along the course to cheer.

The normally crisp and mild New York autumn conditions were replaced by heat hovering around 72 degrees Fahrenheit (22.2 Celsius), among the hottest conditions in the race’s history.

The normally crisp and mild New York autumn conditions were replaced by heat hovering around 72 degrees Fahrenheit (22.2 Celsius), among the hottest conditions in the race’s history

Swiss Marcel Hug had no issues collecting a New York record-tying fifth men’s wheelchair title, establishing a nearly two-minute lead by the 25-kilometer mark before breaking the tape in a course record 1:25:26 to take his fifth major title of 2022.

American Susannah Scaroni produced the fastest-ever time through the five boroughs on the women’s side, winning her second wheelchair major in 1:42:43.