Twenty-seven year old Clarence Isulat is about to become a lawyer. Not long ago, however, this was a possibility threatened by his weight and the issues it entailed.

Being a law student is a serious feat in itself, but in Isulat’s case, the expected hardships that came with studying were compounded by the fact that his body almost didn’t allow him to deal with them. He couldn’t weather the storm even if he wanted to.

“I was irritable, impatient, and had a negative outlook in life. Studying became difficult because I wouldn’t have enough energy to comprehend what I was reading because all I wanted to do was to eat and sleep.”

In 2016, Isulat weighed around 270 pounds. Through the encouragement and guidance of his friend, Dr. Jovy Vergara, with whom he learned to pair running with intermittent fasting, Isulat has lost about a hundred pounds. The decision to lose weight was a resolution that addressed, in part, his issues of self-esteem, but more than anything, it was a pragmatic way of saving his life, a natural response to the most immediate reality he was facing then: “That I was a 26-year-old who is severely obese and would probably die early.”

Now at 170 pounds, Isulat embarks on his fourth year of law studies with a positive outlook, a daily schedule that requires discipline to follow religiously, and a serious understanding of the glaring difference between dieting for just weight loss as opposed to really committing to a healthy lifestyle. 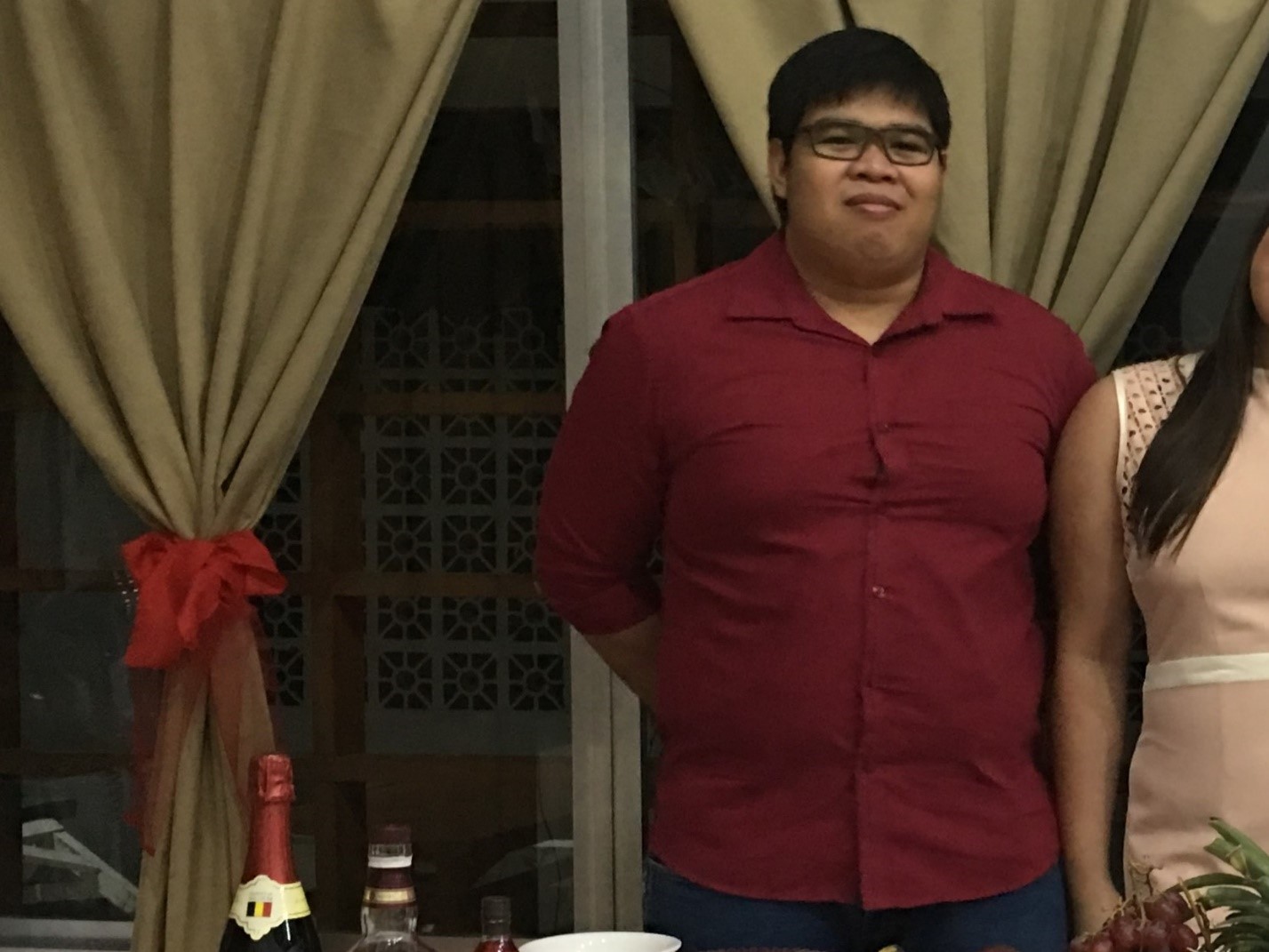 Ever since I was a kid, I was always fat. I was into lots of sports such as basketball, swimming, tennis, and mixed martial arts. Although these activities were really helpful, I was never consistent enough to see and feel the changes in my body. My interest in these sports would normally disappear in about a month or two, and when I try to do them again, I would normally be too out of shape to even attempt them.

During my elementary and high school years I was part of the basketball varsity team. However, a shoulder injury ended any hope I had at a future in basketball. During my college years, I would gain and drop weight several times. It was after graduation in college that I really gave up on myself and just accepted the fact that I was and will always be fat. When I entered law school in 2015, the stress really got to me and I just found comfort in food. So every time I was stressed with school work I would end that day by treating myself to two fast food meals after studying. It got out of hand that I found myself eating the supposedly “reward” meals daily during my second year in law school.

My weight became a problem when I can no longer tie my shoelaces without gasping for air and cutting my toenails was pure torture. At my heaviest, I found myself taking a break on every floor when I take the stairs going to our classroom, which was located at the third floor of the building. Buying clothes was also humiliating for me because it was difficult to find clothes that are at least 4XL.

What was it like the first time you attempted to lose weight?

My first attempt to lose weight was back in college, however, I was not able to maintain it because I was severely depriving myself of carbohydrates and I was basically living on steamed chicken without salt or anything. I lost weight but I eventually gained it back in less than three months. Personally, I find any kind of diet that restricts you from eating certain foods as difficult and not viable. This time around with the guidance of my friend, Jovy Vergara, a doctor, I was introduced to intermittent fasting complemented with running. He also taught me proper running form and all the specifics related to the sport because he is a distance runner as well and has even completed a marathon. During the first few weeks, it was really difficult. I felt pain all over and even contemplated on quitting and just accepting the fact that I will always be fat, but because his approach was scientific I was able to overcome these temptations of quitting and to this day, I continue to improve myself. 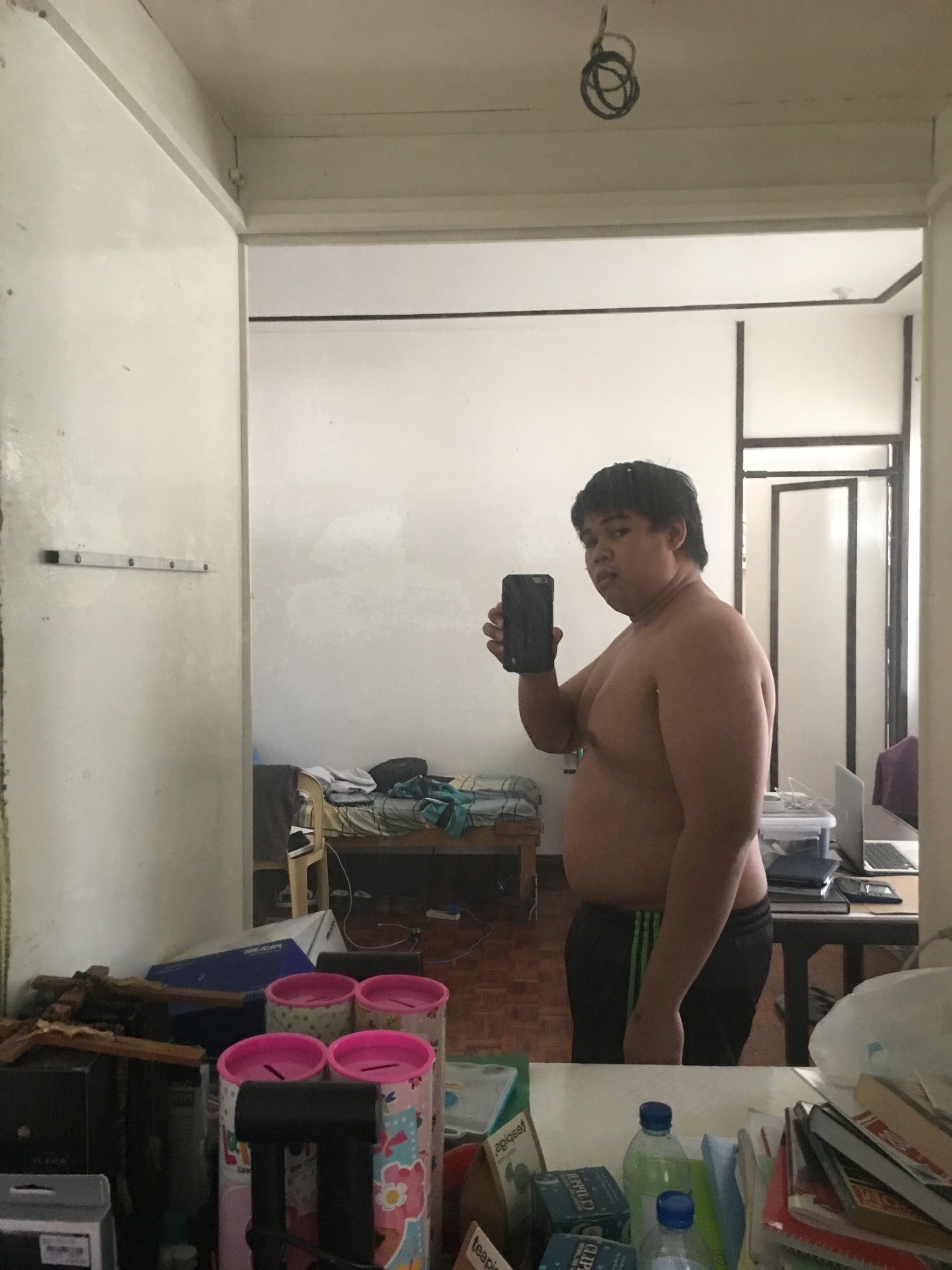 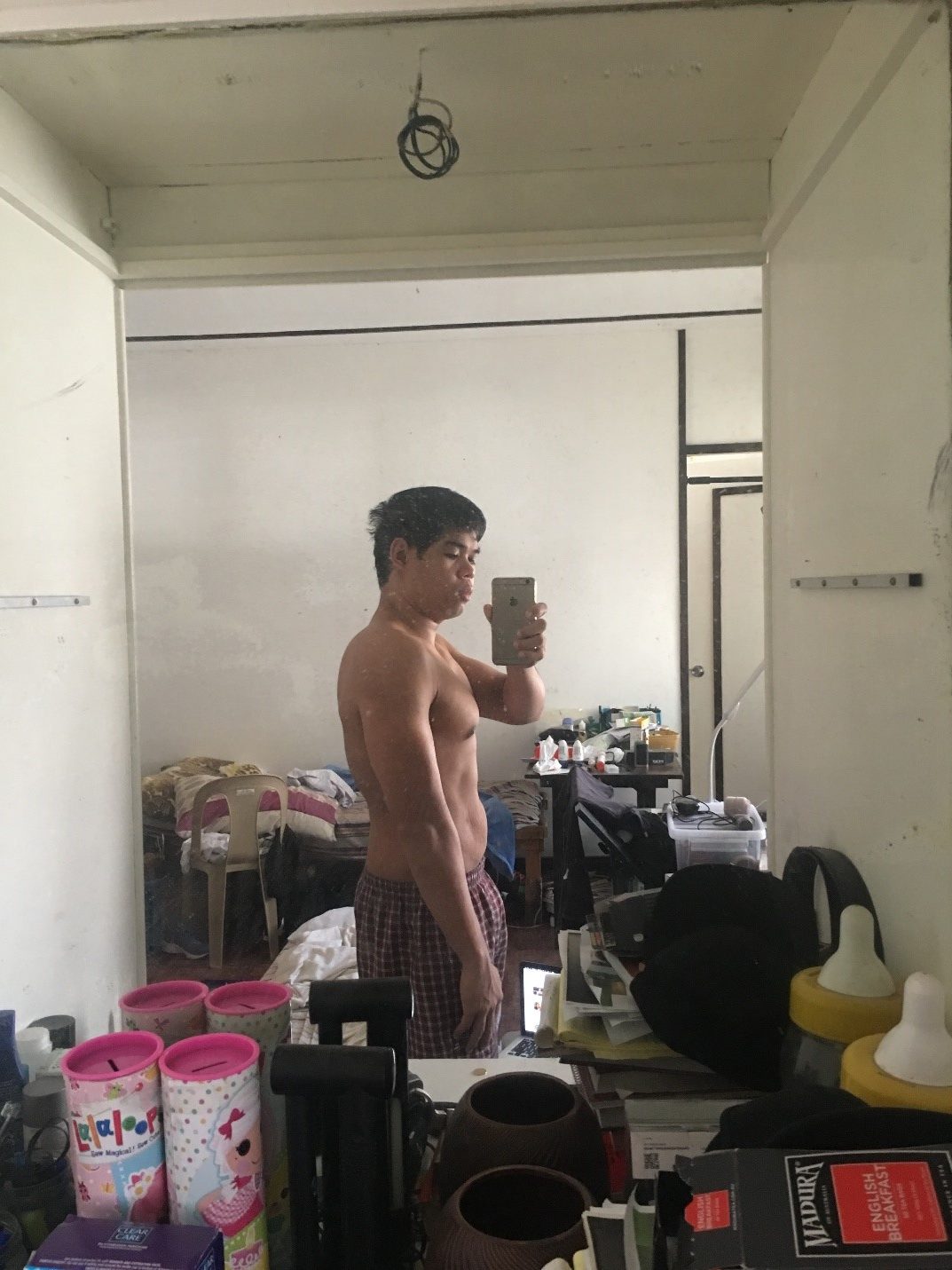 What is the biggest struggle: food, exercise or temptation?

For me the biggest struggle is temptation. I believe that the most difficult battles you have are those against yourself. Temptation is consistently present in our lives in one form or another and it’s up to us how to handle it. There is always a temptation to drink or to eat a lot or miss a workout or skip the gym. But it is always important to battle those thoughts and to focus on your goals—not only in fitness but in all aspects of our lives. 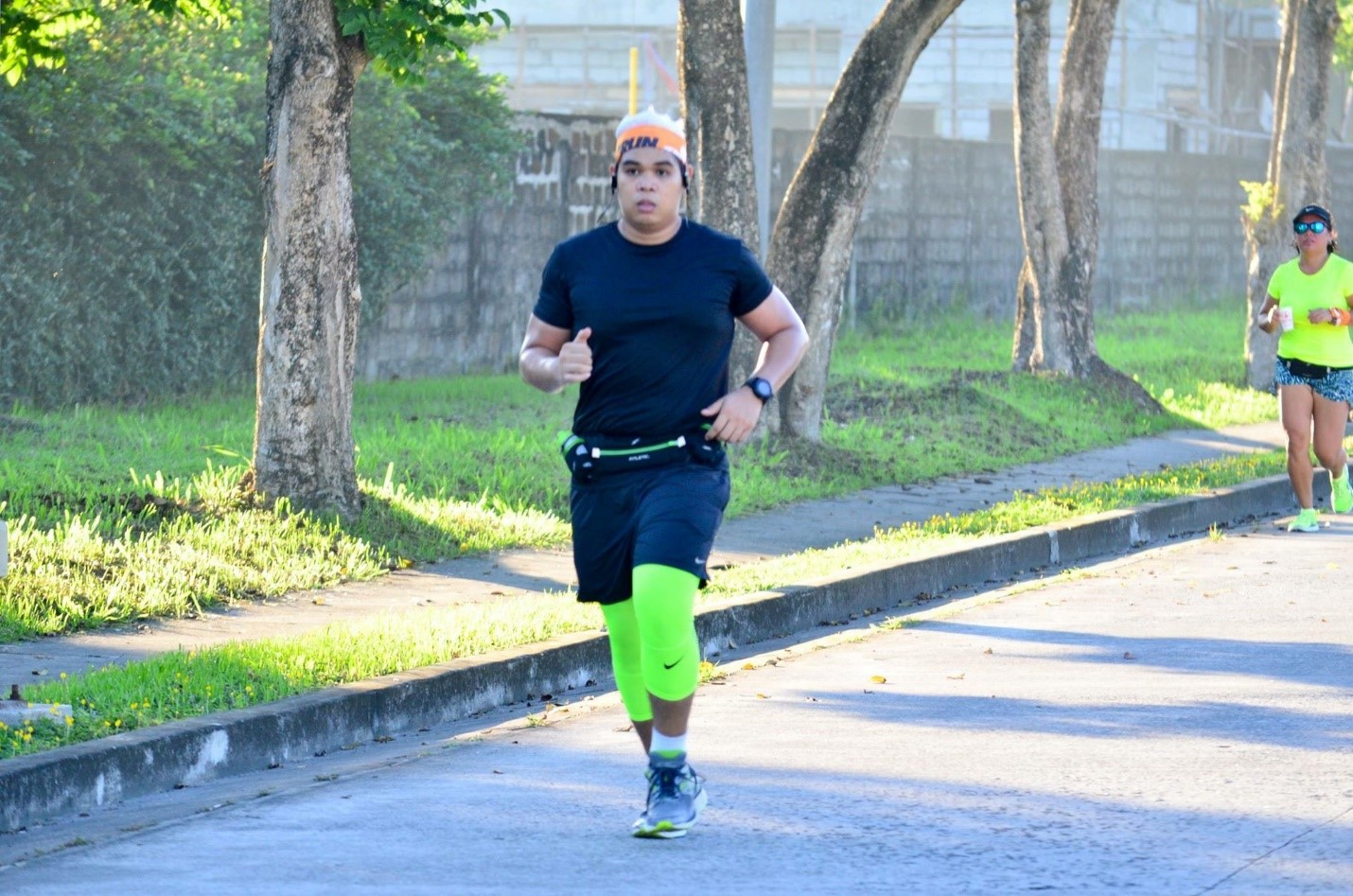 My primary sport now is running. I love running because it is both a mental and physical workout. My transformation proved to myself that limitations are all in the head and that we are more capable than we think. I used to hate running because the actions involved are mainly repetitive and boring, but once you have proper coaching and guidance you will really see that running is a very technical sport.

I usually begin my workouts with warm-ups and stretching of at least 15 minutes. After which I will run on the treadmill depending on the kind of workout I have scheduled for that day, whether it be a tempo run or a long run. But I always see to it that I run at least five kilometers a day. After my run I will stretch some more and then begin my resistance training. I see to it that most of my resistance training are composed mainly of compound exercises and lesser isolation exercises. After resistance training, I usually do a few rounds of boxing before my cool down stretches. On Sundays, I go out for a long run or a swim.

If there is an upcoming run I have to prepare for, I have a different approach. I would wake up early around four in the morning and do road runs rather than the treadmill, except during tempo runs which I do on the track. During my lunch breaks I would do my resistance training and concentrate more on my back and my legs and the workouts are mainly for running like squats and deadlifts.

Now that you’ve lost a significant amount of weight, how do you plan to keep it off? What are your next goals?

My plan is to continue with intermittent fasting and running because of the health benefits brought by them. I plan to keep the weight off by joining fun runs and also inviting my family and friends to join me for training and for fun runs. 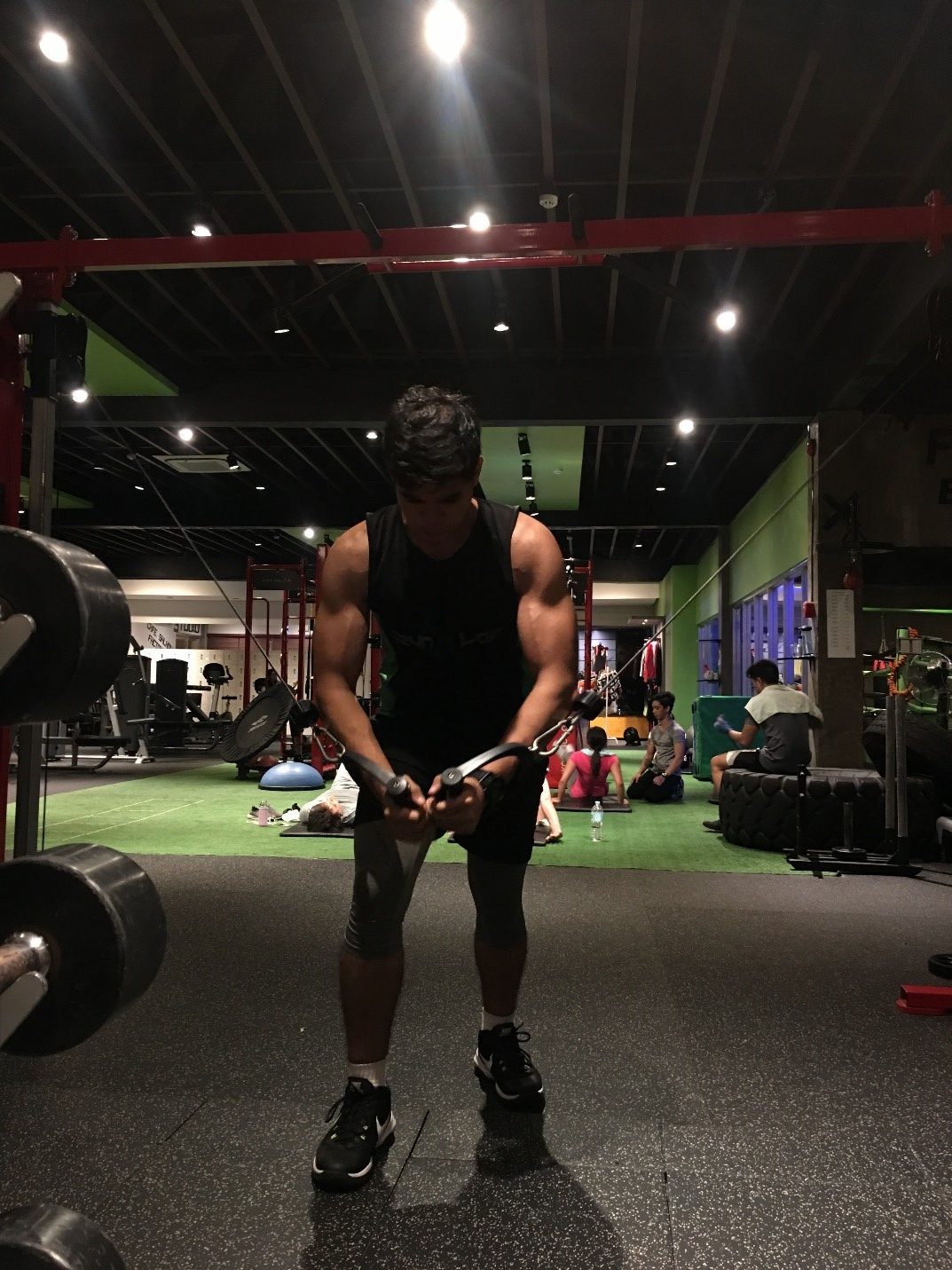 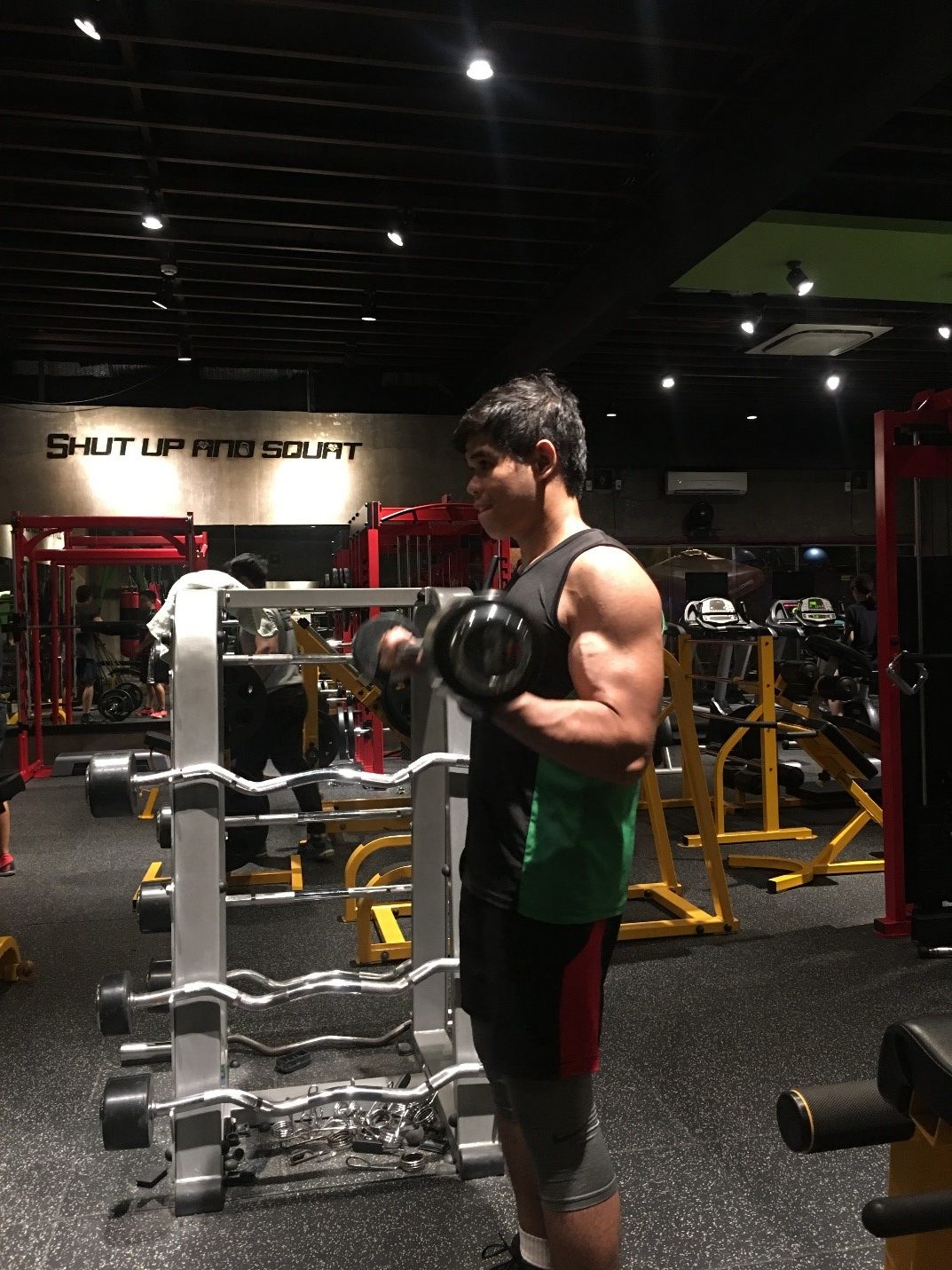 My next goal is to complete a marathon and eventually transition to triathlon. However, I promised myself that I will only join triathlon events when I become a lawyer.

Were there times when you felt down? What kept you motivated when you were feeling down?

Yes, there were several times when I felt down and I even wanted to quit a few weeks after starting. What kept me going was the reality I was facing back then: That I was a 26-year old who is severely obese and would probably die early. I was also motivated even more when I read an article online stating that 25-35 is the age range in which a person is in his physical prime. I took a good look at myself and said that this can’t be my physical prime.

How has your weight loss affected your relationships?

My younger sister used to call me a fat impatient man because I was always irritated and angry. My weight loss really improved my overall health, emotionally, physically, mentally, and spiritually. The weight loss taught me how to be patient, how to take things one step at a time, and to be consistent.

Aside from the exercise routine, what specific changes to your lifestyle have you made that works for you?

Aside from the exercise routine I also improved my study habits and work ethic. The sport of running and the amount of time involved in training taught me the value of patience and consistency. All these values that I learned from running, I see to it that I apply it to all aspects of my life. I became more patient now, more understanding, less angry, and I have a positive approach in life. It also taught me the value of second chances and that anyone can change for the better as long as you really want to. I also found myself consuming lesser alcohol because I find running early in the morning aiming for a PR more appealing than staying up late drinking. Although there are times I still go out and drink but in moderation. 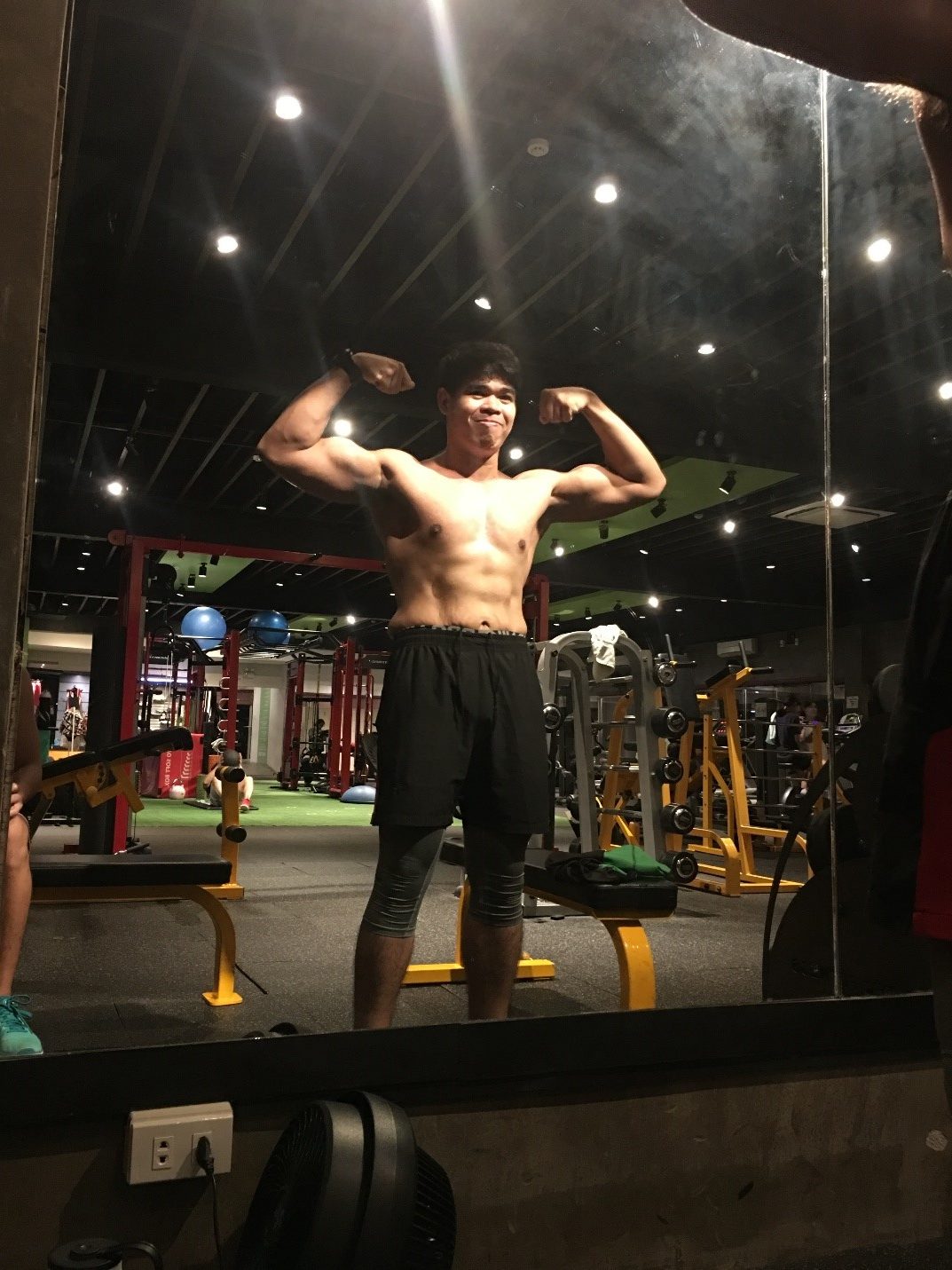 What’s the biggest misconception about people wanting to lose weight?

I think the biggest misconception about wanting to lose weight is that it can be achieved over a specific time or in a short amount of time. We have to understand that to lose weight, there must be a lifestyle change because without that change we would definitely revert to our old weight. It is essential that we see fitness as a lifestyle, not something temporary. I don’t believe we should only work out just to look good for an upcoming beach trip or for a wedding or any event, instead we should be consistent and aim for overall health, not only for aesthetics.