Ian Pangan didn’t let stress take control of his life. Now, he’s a role model everyone should look up to

I am Ian Pangan, 24 years old and a senior law student at the UST Faculty of Civil Law.

I have always been a fat kid since the last 23 years of my life with 238 pounds as my heaviest weight. My journey is no different from teenagers who attend family gatherings where relatives would remark about their weight. ‘Ayan, napabayaan ‘yan sa kusina,’ ‘Biik,’ ‘Baboy,’ etc. I would often ignore them although part of me was hurt. And even though my mom would give me gym allowance, I ended up spending the money on chips and beers.

As of this writing, I now weigh 169 pounds, losing a total of 67 pounds. I still hit the gym and try to juggle it with my relatively toxic schedule in law school. No excuses, I always remind myself

It was July 2014 when I enrolled in law school that my weight problems got worse. The stress of law school was too much that I made eating whatever I want, without regard of its calories or nutritional content, an outlet to cope with the strain.

My mantra in life then was, ‘When stressed, thou shall not count calories.’ I made stress a very convenient excuse to eat my favorite foods: chocolates, pizzas (yes, a box of it), fries, and hamburgers. On Fridays, it’s either I go out for beer nights or buffet restaurants to reward myself. 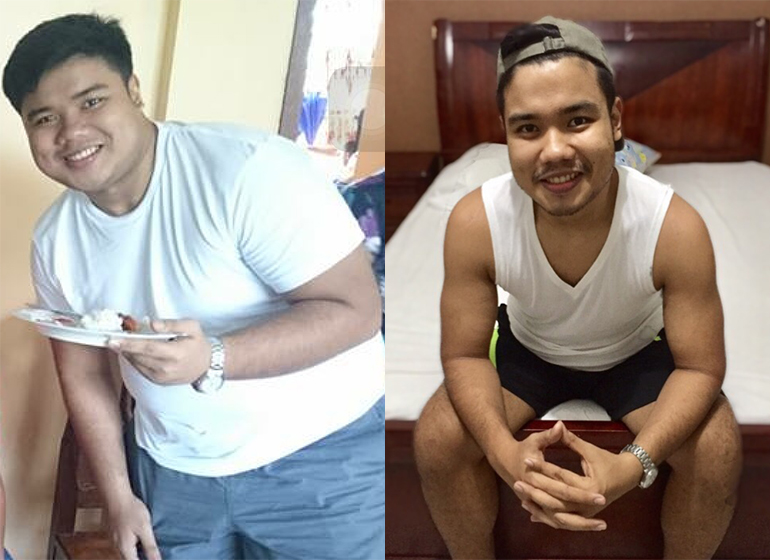 Having  engaged in the aforesaid lifestyle, I became very fat. I was so insecure and I would easily get mad for no reason. I felt so insecure. Whenever I see men my age partnered and happy with their relationships, I would feel bad for myself, attributing everything with my physical appearance. At 23, I had difficulty breathing, was hypertensive and prescribed to take maintenance medicines.

I knew I had to do something.

When I first hit the gym, it was very uncomfortable; it felt like everyone was looking at me. Were it not for the membership fees that I paid, I would have dropped out early. That I lose a pound in one day and gain double the next even aggravated my desire to quit

In April 2015, Kim, my cousin who is a fitness enthusiast, encouraged me to enroll at the gym and incorporate a healthy diet. It was not easy. I cut off soft drinks, chips, and other non-healthy sources of calories. I began eating clean and focused on monitoring my macros, i.e. fats, carbs, and protein. I would wake up 6am to prepare meals and snacks for the whole day. Low-calorie fruits like bananas and apples, chicken breast, and whole wheat oats became my best friends.

When I first hit the gym, it was very uncomfortable; it felt like everyone was looking at me. Were it not for the membership fees that I paid, I would have dropped out early. That I lose a pound in one day and gain double the next even aggravated my desire to quit. 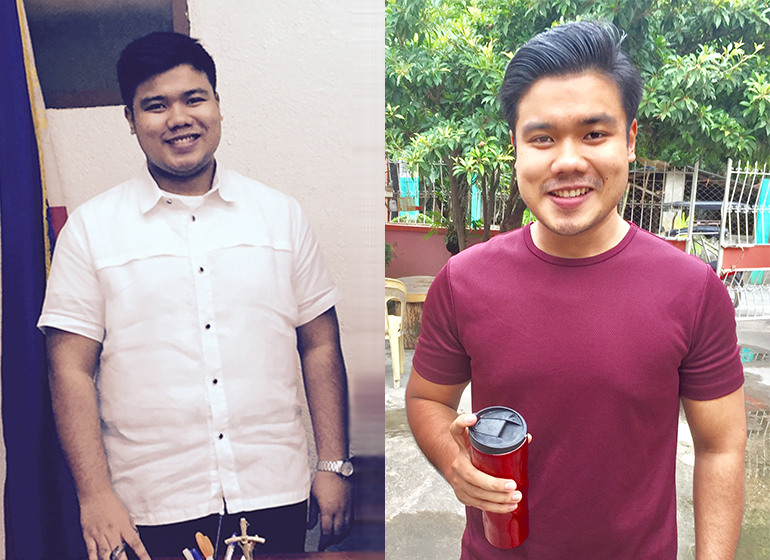 It was in December 2015 however when the results became apparent. From 238 pounds, I dropped down to 196 pounds. As I started losing pounds, I became more motivated and decided to hit the gym four times a week. I would immediately run to the gym after my evening classes in law school.

As of this writing, I now weigh 169 pounds, losing a total of 67 pounds. I still hit the gym and try to juggle it with my relatively toxic schedule in law school. No excuses, I always remind myself.

I have also managed to channel stress in a healthier way. Whenever I feel stressed, I would hit the gym, swim or jog. This lends truth to the statement that exercise is the most underutilized antidepressant.

My advice to those who want to lose weight but cannot—either they can’t find the motivation or don’t know how to—are as follows:

Fad dieting is very rampant these days. While most starvation diets are effective, they are not sustainable.

In my case, I personally prefer hitting the gym four times a week and just work out for 30 to 45 minutes than work out for an hour or two but do it intermittently. It’s the quality of workouts that matters.

It’s a matter of priorities. Rather than staying up late at night checking Facebook, try sleeping early to jog in the morning and prepare healthy meals.

Pray and Inspire Others

Do not be boastful of your transformation. Whenever I hit the gym and encounter an obese gym goer, I try my best to establish rapport with him. If need be, I would invite him to work out with me and remind him to keep going.

These 5 expert tips may help you in post-workout recovery