This couple found love in an indoor cycling studio

Couple Anthony Guanzon and Ria Alban is the perfect example of finding love in the unlikeliest of places. In their case, it’s in the spinning studio

The moral of this story is that indoor cycling classes are not just about getting a good workout. Sometimes, you get out of there and your whole life’s changed forever. That’s exactly what happened to Anthony Guanzon, 26, and Ria Alban, 35 when they found themselves one fateful day at Saddle Row.

“He was one of the instructors there during the time,” says Alban. “During a class, Anthony’s bike was beside me and noticing that he was a quiet guy—I mean I literally never see him smile—I asked him if he was training for something. He told me he has an upcoming duathlon event. That was it because we can’t really talk much during a spin class.”

And yet a week later, the two again found themselves serendipitously scheduled for a brand’s lifestyle video campaign shoot that would go down as one of the moments that defined their made-for-the-movies script. “We were invited to be talents for the bike ride portion,” says Guanzon, who is currently a marketing manager for Planet Sports.

“That time I didn’t know his name yet,” admits Alban, “so I only realized it was him when I saw him there. And he was late.” As the shoot went on, the two, in stark contrast to their first meeting, finally had a chance to interact. The tipping point came when Alban saw him sweating so much at the end of the shoot. 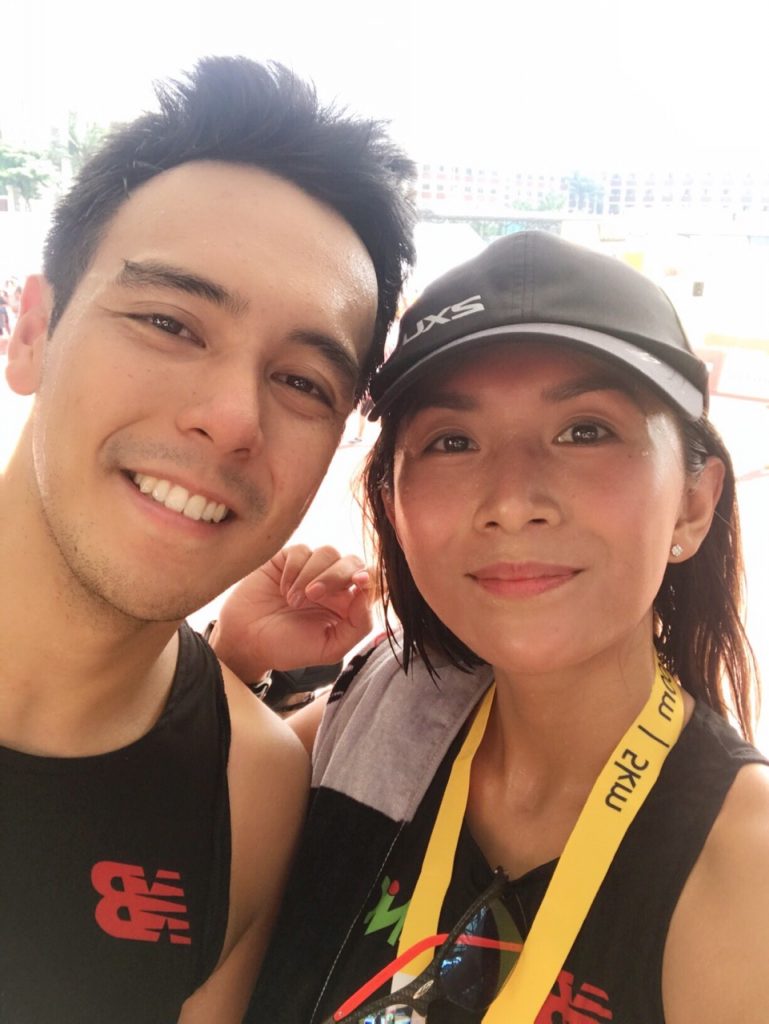 At the Sunlife Aquathlon

“He didn’t have a towel so I lent him one of my extras and told him to just return in at the spin studio. I learned that he saw that as an opportunity to get my number. And the rest is history.”

So you got together through indoor cycling but you’re not just pure cyclists. Tell me more about your endurance sports background.

Anthony Guanzon (AG): Essentially, we got together because of cycling. I couldn’t swim and I was afraid of the mere thought of swimming in the ocean. After the video shoot, we would have small chats whenever we’d see each other during spin classes. It all developed from there. She was a year into triathlon. I was simply cycling and had just ventured into duathlons.

Ria Alban (RA): Anthony never  knew how to swim. In fact he is literally afraid of the water. So I really watched him grow from someone who panics while in the water to now beating me during our swim course. Last year, I decided that I was finally ready to do an Ironman 70.3 because I’ve done two standard events already, but then Anthony wanted me to do it in 2018 so he could join me. I told him that I already planned it and there was no way he could talk me out of it, so this suicidal guy jumped in and registered himself without knowing how to swim. That’s when he started to learn swimming with the help of a close friend who is also a triathlete. So fast forward, we successfully conquered Ironman 70.3 Cebu. 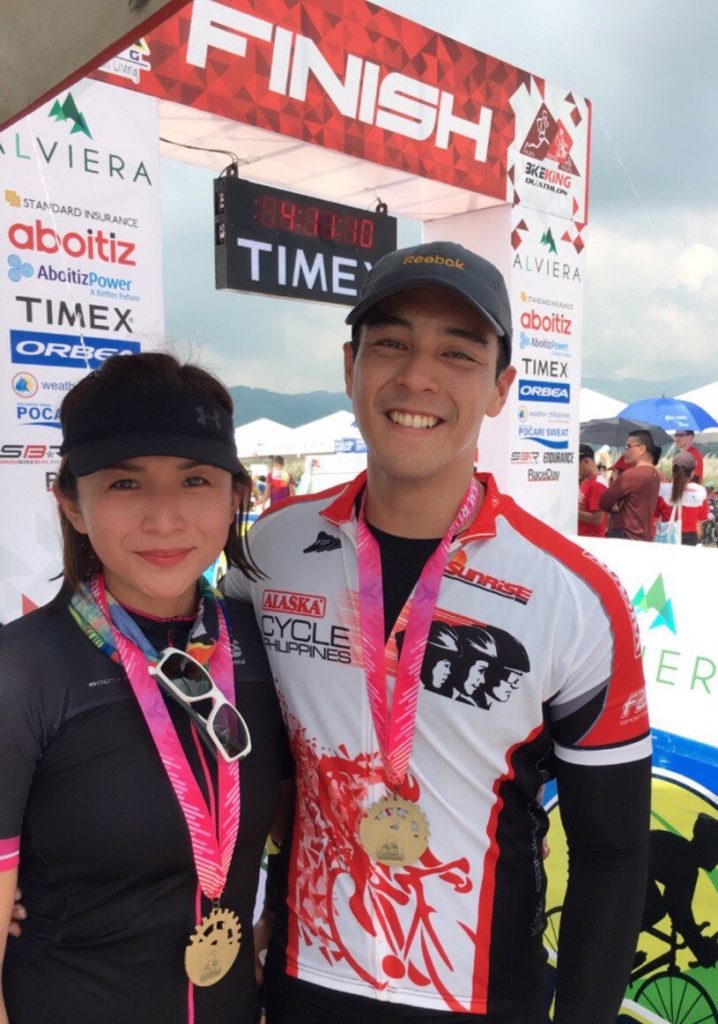 Their first race together at the Bike King Duathlon

AG: Our first race together was Bike King Duathlon last year. It was my second time to ride out and my second race ever. It was great. She finished way ahead. My bike wasn’t even properly fitted then.

RA: We trained for it together. Since I went into the sport before him, he would really compete with me during our trainings. He’s really a competitive person. So then he kept up with me until his legs finally taught him a lesson about pacing. He earned himself an ITBS and the lesson was well taken.

Would you say it’s easier or harder to compete when your significant other is also part of the race? Do you get distracted when you know you two are competing together or is it more of a motivation for you?

AG: It’s a bit of both. I’m a very competitive person, but I don’t express it much. I love winning. But it was actually because of her that I transitioned into triathlon.

RA: At first we were competing with each other until we finally established that although he is the stronger athlete, I’m the faster one (except for swimming). So from then on, it became purely motivation for us. 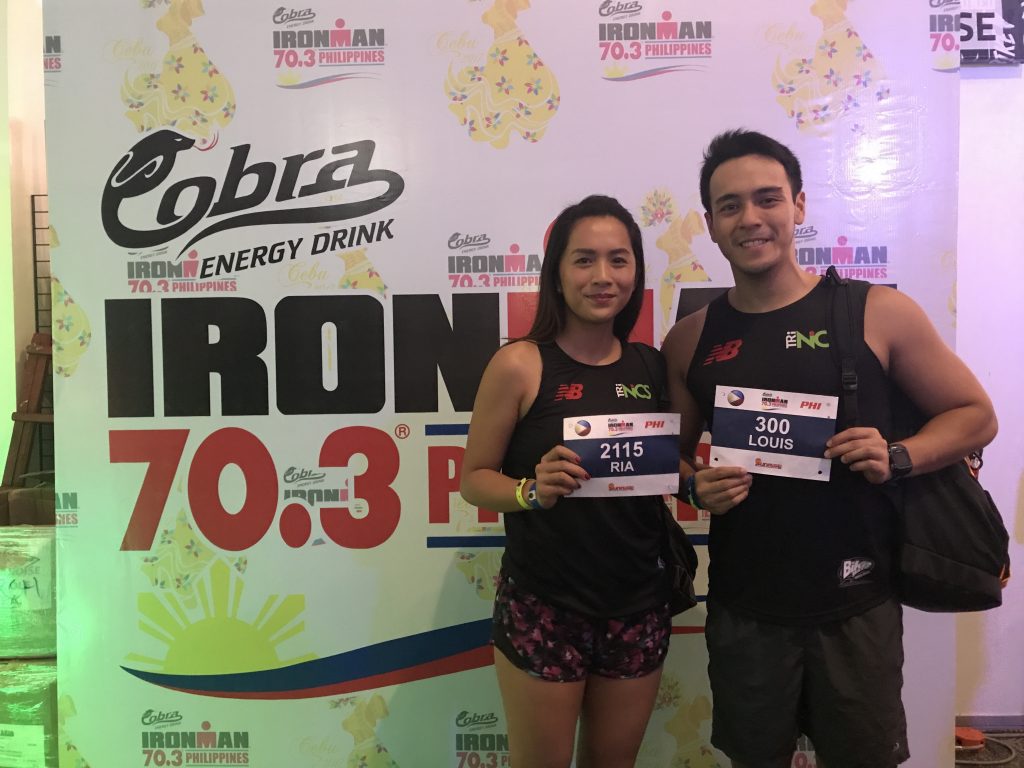 At the Ironman 70.3 Philippines expo in Cebu

So, who’s the better triathlete?

RA: We therefore conclude that he is the stronger athlete but I’m the faster one.

RA: We almost always train together and it’s a great thing because between the two of us, he is the more disciplined one. When Im bumming around, he pushes me to do it. And he’s very supportive. I have discovered a lot about myself that I didn’t know I have and can do if he wasn’t there to show me. I’ve become a better athlete ever since.

AG: Off triathlon, we’re essentially best friends. We love watching movies and trying new restaurants. Getting fit comes easy when we’re both in the mode to lose weight. However, it’s really challenging when one of us starts craving something because you can’t just watch the other person eat and not get into it as well, can you?

AG: The pros: You have someone to train with, talk to about sports, and compete with. Basically, you have a buddy. And the con is it’s sort of expensive [laughs].

The moral of this story is that indoor cycling classes are not just about getting a good workout. Sometimes, you get out of there and your whole life’s changed forever. That’s exactly what happened to Anthony Guanzon, 26, and Ria Alban, 35 when they found themselves one fateful day at Saddle Row

RA: It’s way better to have a triathlete for a partner because they would understand the training and the expenses related to the sport. I can imagine how difficult it would be to explain to a partner that you will need time off to train because training for an event will really take a great deal of your time, plus you have to work. So it will really affect the time you have to spend with each other. Fortunately for us, we do that together. Also the finances involved in the sport. It’s really not a joke. I’m really thankful that with us, there’s no need to explain.

What’s your favorite thing about each other?

AG: Her butt when she’s wearing the trisuit or running shorts [laughs]. On a serious note, she inspires and motivates me to go beyond my comfort zone.

RA: My favorite thing about him is that he is extra patient with me. I could really be stubborn sometimes especially because I’m used to doing things on my own and in my own way. The first thing I saw in him that I really admired is that he is a man who knows what he wants in life and has a plan on how to get there. 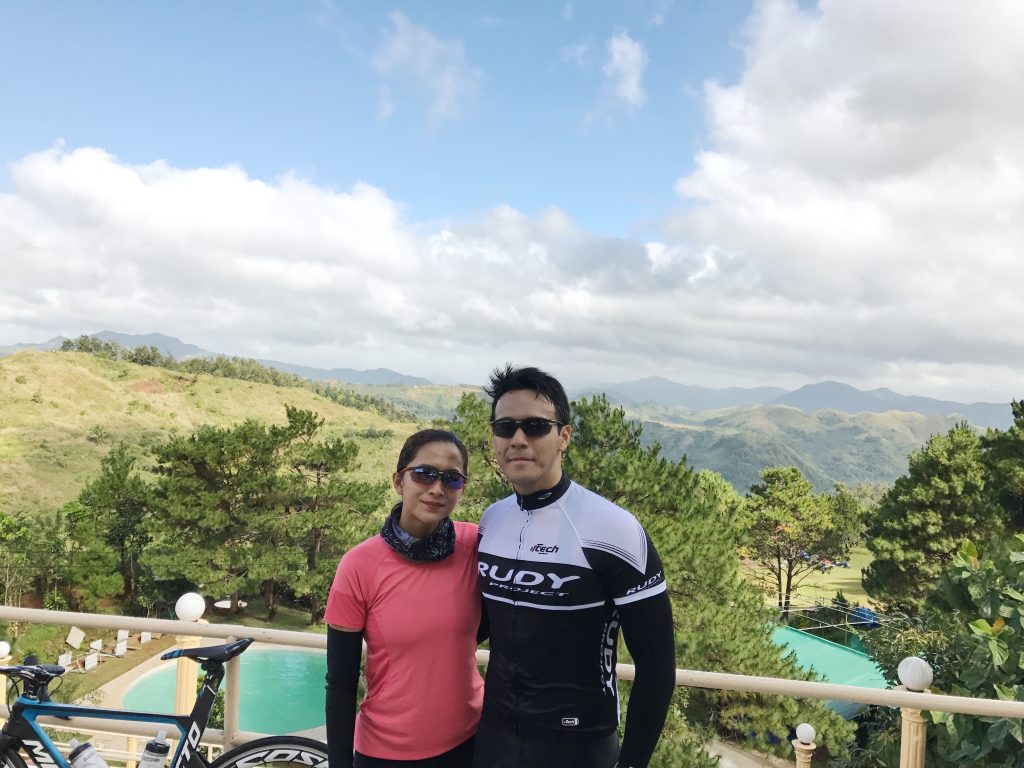 Are marriage plans on the horizon?

RA: I can definitely see myself with him for a very long time but for now we just want to enjoy each other, celebrate every milestone, and watch each other evolve to be a better version of ourselves.

What’s in store for next year?

AG: We plan to start training again, perhaps another Ironman to join. But more of the standard races we can compete in. We also want to try doing another relay race and hopefully get a podium finish together.

This athletic couple talks triathlon, boundaries, and the ties that bind them