How this trail running legend could make you love the outdoors

A love for the woods doesn’t just move Thumbie Remigio to conquer it during races. The trail master has made it his mission to protect it and all of nature, too

As we scout a suitable stretch of forest on which to shoot, Remigio’s farther on up the trail, easily walking over it as though the rough dirt road was the smooth asphalt of city streets. He tells me later that he’s always here at La Mesa to train, since it’s the closest trail to everything. Oh, so that’s why he traverses it without issue. This is his yard. This is his kingdom.

Lost in the Woods

Well, that, and over a decade’s worth of trail experience, plus a lot of time spent outdoors. “I started [trail running] when I was a mountaineer,” recounts Remigio, who graduated with a degree in Nursing from the Pamantasan ng Lungsod ng Maynila (PLM) in 1994. “I’m a member of the UP Mountaineers, and we have this PLM outdoors club. I started as a mountaineer; hiking, trekking, talagang outdoor sports. I tried rock climbing, kayaking, pero basic pa rin talaga ‘yung paglalakad sa bundok. And then noong nagsimulang magkaroon ng adventure races, na-discover ko na competitive pala ako. So nag-join ako ng isang race and then na-feel ko ‘yung excitement ng running on trails. That was 1998. ‘Di na ‘ko nag-stop.

”Such is Remigio’s affinity for the trail that not only do road races—the bread and butter of the multisport scene, the arena in which the triathlete largely shapes his glory and legacy—bore him, they even injure him more than off-road races do with their unreliable terrain. “Siyempre, ‘yung semento, matigas, ‘yung impact ng landing ng paa mo sa semento mas malakas, tapos I do long-distance running. Usually 40 kilometers and above,” he says.

Remigio is also into ultra-trail runs, events that run even longer than a full marathon and see participants go at it for more than 24 hours, like the North Face 100 race in Baguio last May. He’s initially hesitant to admit his general dislike for road races, but it was too interesting to pass up. “I started as a racer before. Pero nagsawa ako eh, paulit-ulit lang ‘yung areas, so iilang lugar lang, tapos ‘yung course ko ‘di ko na mabago. Hindi na-i-stimulate ‘yung senses ko, eh. ‘Di rin ako na-mo-motivate para mag-push hard, so sobrang hindi ko ma-enjoy.”

It’s just how Remigio’s wired—there are some runners who think running on a treadmill in the gym is the dullest kind of training they can do. Running in an urban setting, where the ground is made of concrete and not earth is his treadmill. “Sa trail, hindi mo alam what to expect every time na lalabas ka. Kumbaga constantly exciting, and at the same time, dangerous. ‘Yun ‘yung thrill.” 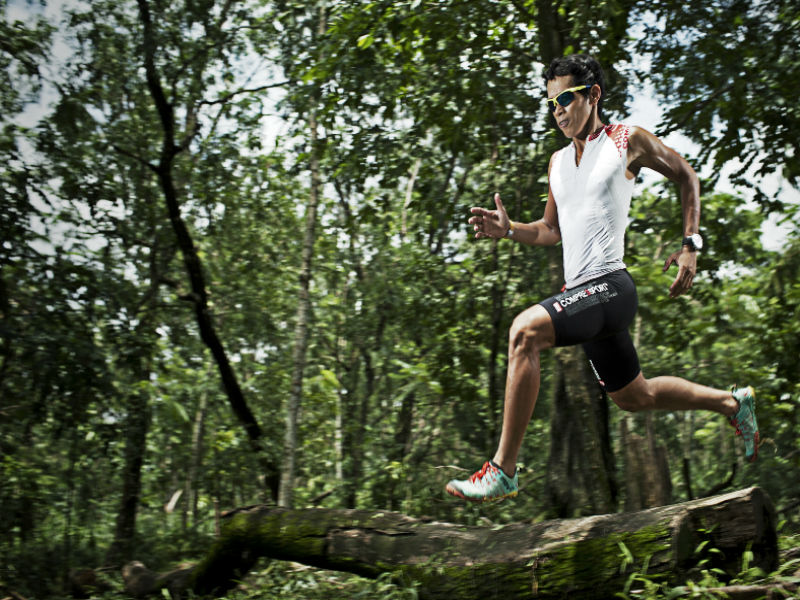 A Man of Nature

In addition to being one of the country’s top trail runners, Remigio is also a race director and organizer, having been tapped by events companies shortly after his initial success of putting races together for them. His first job was organizing a race in Samal Island, Davao, back in 2000, and the projects kept flowing in from there.

Eventually he started to organize both trail and road races, but given his disdain for the latter, he’s now shifted most of his focus to just organizing trail races. If he puts together an urban race, it’s likely because the event is in line with his advocacies, such as the Run for Pasig River.

Mostly, though, he does it to raise awareness for the environment and the country’s great and many tourist spots. “Aside from promoting a healthy lifestyle, gusto kong ipakita ‘yung mga trails natin,” Remigio explains. “‘Yung mga trails na ‘to, dapat we can maintain this in its current state. Marami pang mag-e– enjoy, marami pang makikinabang na future generations.”

More over the Horizon

Although he’s been running for 16 years, Remigio isn’t showing signs of slowing down. He intends to finally join Xterra next year and qualify for Kona. He will continue doing what he does because he likes where trail running is in the Philippines now, with more people taking the plunge locally and an increasing number of Filipinos representing the country on the international stage. On top of that, more trail runners also means more awareness for the environment.

If getting lost in the woods, losing your breath on the way up a mountain, and churning in waves at sea all in the name of adventure was what made Remigio the chill, laid-back athlete that he is today, then getting into trail running might not be such a bad idea. And if the environment gets saved along the way, then we all know to thank the King of the Forest.

Why cycling is the ideal cross-training for runners

Want to get dirty and embrace the challenges of th